CDC urges vaccination now to protect against flu this season.

October 28, 2022—CDC’s FluView report today shows that early flu activity has brought early flu-related hospitalizations, with the highest hospitalization rates in children and older adults. Levels of laboratory-confirmed flu activity continue to increase and are highest in the southeast and south-central parts of the country. CDC also reported the first flu pediatric death of the 2022-2023 flu season. While it is too soon to say how severe the season will be, the early flu activity underscores the importance of vaccination this season. CDC recommends that everyone 6 months and older get a flu vaccine, ideally by the end of October, to help protect against flu and its potentially severe complications; however, flu vaccine claims data suggest that uptake may be down compared with the same time last season.

CDC also reported the agency’s early estimates for the burden of flu this season. Preliminary estimates from October 1 through October 22 are that at least 880,000 people have been sickened with flu,  420,000 people have visited a health care provider for flu illness, 6,900 people have been hospitalized for flu, and 360 people have died due to flu illness or flu-related complications. These estimates are derived using a model which uses hospitalization data from the FluSurv-NET system as an input. CDC provides these estimates to better reflect the full burden of flu in the United States. because flu surveillance does not capture all cases of flu.

Other respiratory viruses are spreading too:

Data from the U.S. Outpatient Influenza-like Illness Surveillance Network (ILINet), which tracks the percentage of people visiting outpatient health care providers or emergency departments for fever and cough or sore throat, show that respiratory disease overall is high in the United States for this time of year. According to surveillance systems that track other respiratory viruses, some of those are circulating at elevated levels for this time of year, including respiratory syncytial virus (RSV) and the virus that causes COVID-19.

It’s important that people take action to prevent respiratory disease, especially people who are at higher risk of developing serious complications, like young children, older adults and pregnant people. For flu, vaccination is the best preventive tool available. Flu vaccination coverage among children and pregnant people has decreased during the past two years. Lower coverage and little flu circulation for two years may have reduced population immunity, especially in young kids, which could lead to more flu illnesses this season, and potentially more severe illness. CDC recommends that everyone 6 months and older get a flu vaccine as soon as possible.

While vaccination is the best way to prevent flu and its complications, antiviral drugs are also available to treat flu virus infection. For higher risk patients who get flu and anyone that has severe flu illness, CDC recommends treatment with a prescription flu antiviral drug as soon as possible. Also, for flu and other respiratory viruses, everyday preventive actions like covering coughs and sneezes, handwashing, and staying home when sick can slow the spread of illness. These actions may be particularly important for other respiratory diseases for which there is no vaccine.

As of October 22, 2022, 136.9 million doses of flu vaccine had been distributed in the United States. As of October 8, nearly 23 million flu vaccines had been given to adults in pharmacies and physician offices. This compares with about 27 million doses given as of October 9 last year. These numbers do not include flu vaccines given in the workplace or other instances where a reimbursement claim was not filed. Vaccination coverage for all children as of the week-ending October 15, 2022, was similar to the estimate for the same time during 2021 (22.1% compared to 21.7%). Based on a survey conducted October 7-9, 2022, 21.2% of adults had already received a flu vaccine this year, which is similar to the estimate from a comparable survey conducted at the same time last year. 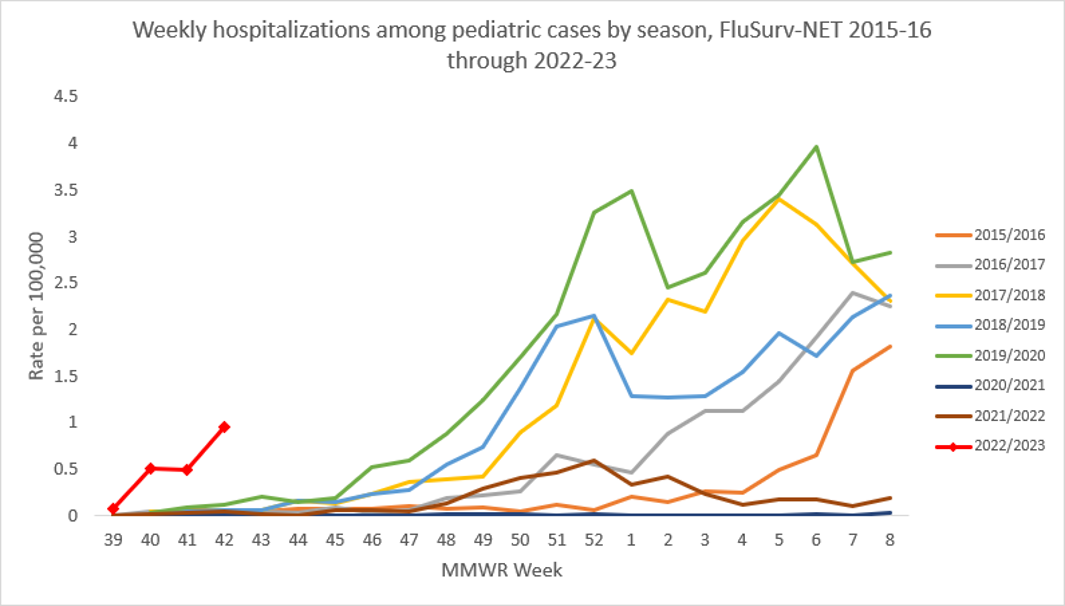 Caption: This graph shows weekly flu hospitalization rates among children during the 2022-2023 flu season so far compared to rates through February during the previous seven flu seasons. 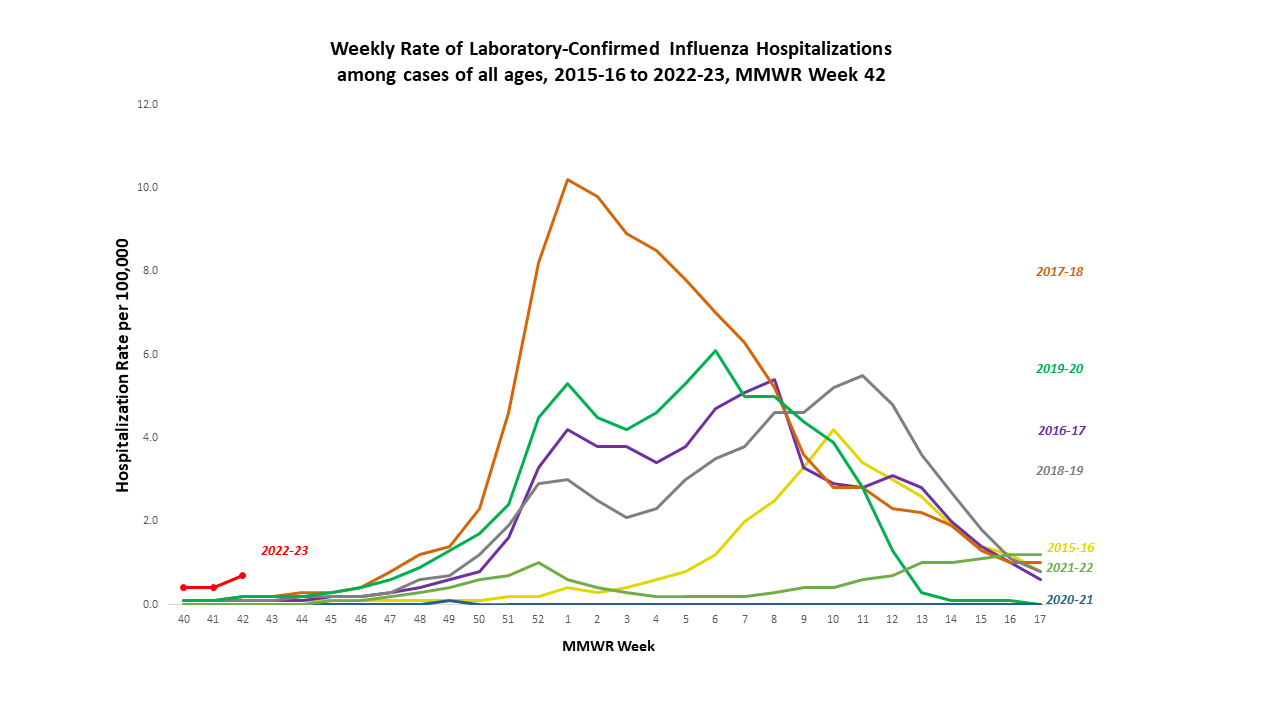