On September 26, 2019, HHS Secretary Alex Azar, received a flu vaccine at the NFID 2019-2020 seasonal flu news conference. CDC Influenza Division Director Dan Jernigan, M.D., M.P.H., also attended the press conference. Dr. Jernigan took questions from the media and received his flu vaccine, emphasizing that now is the time for everyone 6 months and older to get their flu shot!

Thursday, September 26, 2019 — Today the Centers for Disease Control and Prevention (CDC) and the National Foundation for Infectious Diseases (NFID)external icon, along with other public health and medical groups, kicked off the 2019-2020 flu vaccine campaign at a press conference held at the National Press Club in Washington, D.C. Members of the public and health care professionals were urged to follow CDC’s recommendation for everyone age six months and older to get an annual flu vaccine. Health and Human Services (HHS) Secretary Alex Azar II gave the keynote address. Secretary Azar reported CDC flu vaccination coverage estimates for 2018-2019 that showed 45% of Americans adults got a flu vaccine last season while nearly 63% of children were vaccinated.

Get Vaccinated to #FightFlu 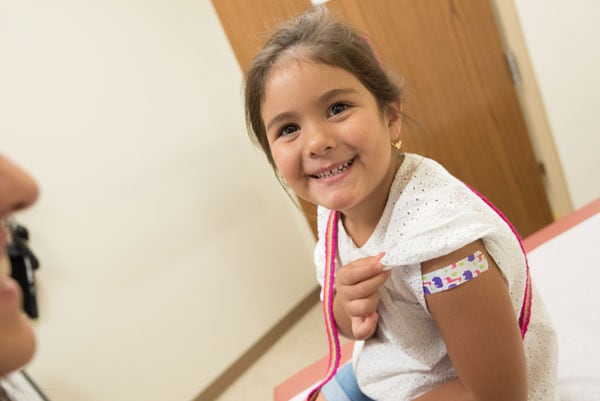 The best step you can take to prevent influenza (flu) and its potentially serious complications is getting a yearly flu vaccine.

Every season flu sickens millions of Americans, hospitalizes hundreds of thousands, and kills tens of thousands. The 2017-2018 flu season was the most severe in a decade. While only moderate in severity, the 2018-2019 season was record-breaking in duration, with flu activity remaining elevated for 21 weeks. The U.S. had two different waves of flu, the first caused by H1N1 viruses and the second caused by H3N2 viruses.

Flu vaccine is the best way to prevent flu and its potentially serious complications. Last season, more than 169 million doses of flu vaccine were distributed; the most ever distributed. On September 26, CDC released a report detailing flu vaccination coverage among the public and health care providers.

Overall, CDC estimates show that flu vaccination coverage has increased over the past decade, though the increase has been more impressive in children.

Vaccination coverage among adults is around 45%, leaving more than half of adult Americans unprotected from flu each season. Sixty-eight percent of people 65 and older were vaccinated last season, making them once again the most vaccinated among the adult population. Adults 18 to 49 years old were the least vaccinated at 35%.  Looking back to 2010-2011, flu vaccine coverage in adults overall was just under 41%. Coverage in people 65 and older was nearly 67% and in people 18 to 49 years it was just under 31%. Estimates for 2018-19 show an increase of about 4 percentage points since 2010-2011 in adults overall and adults 18 to 49 years, but very little improvement in coverage among adults 65 and older.

Information on influenza vaccination coverage among pregnant women will be available in October as part of CDC’s Vital Signs report on the importance of maternal immunizations.

Secretary Azar’s reminded everyone that flu can be serious, killing tens of thousands every year—and that the benefits of flu vaccination are substantial, saying: “Flu vaccination can keep you from getting sick, it can keep you out of the hospital, and it can even save your life.” He encouraged Americans to use the hashtag #WhyIFightFlu this season and to talk about why they vaccinate. He concluded his remarks by saying he was himself getting vaccinated to “protect my family—my wife and kids, my parents—and to protect everyone else around me every day [from flu]”.