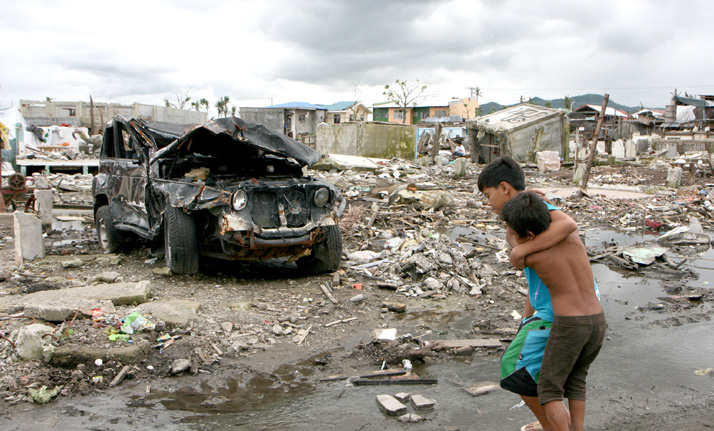 In Tacloban the damage from Typhoon Haiyan was devastating.

In November 2013, Typhoon Haiyan struck the eastern side of the Philippine Islands, home to 11 million people. The storm, with sustained winds of 195 mph and gusts up to 240 mph, is the strongest typhoon to strike landfall in recorded history. Typhoon Haiyan also created a 20 foot tall, tsunami-like storm surge, which further decimated the coastal communities. More than 6,000 people lost their lives and an estimated 4 million people were displaced from their homes by the storm.

In the wake of the disaster a large international relief effort was mobilized. CDC deployed experts in epidemiology to provide assistance in the post-disaster response. CDC contributions to the relief efforts have included responding to vaccine shortages and an outbreak of measles, preparing for potential infectious disease outbreaks including cholera and other diarrheal diseases, and dengue. CDC is also providing technical support to the World Health Organization (WHO) and the Ministry of Health as part of the Emergency Management Team to help strengthen and implement emergency disease surveillance systems. 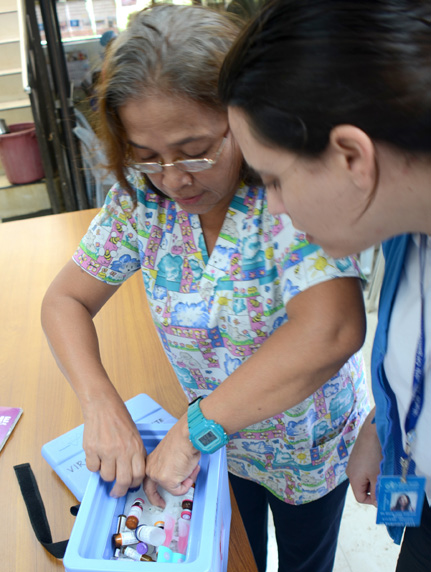 A WHO member is overseeing the vaccinations that a nurse from the Tacloban City Health Office will be administrating later that day. In preparation for the measles vaccine campaign, she has measles, vitamin A and oral polio ampules in the portable vaccine cooler.

A lack of electricity in impacted areas caused critical failures in the refrigeration of vaccinations. Vaccine supply and distribution were halted in these areas, impacting 1.8 million children needing life-saving childhood vaccines. CDC worked with the Regional Director of Health and UNICEF to restore routine immunization services and rehabilitate the region’s overall vaccination system.

The impacted areas have been involved in an outbreak of measles. In response to the outbreak, CDC worked with partners to implement immunization campaigns for those most at risk and helped UNICEF secure enough measles vaccine to immunize 80,000 children. As of February 2014, more than 78,000 children (6-59 months) were immunized against measles.

The impacted region is also at increased risk of cholera and other diarrheal diseases due to damage to the water supply infrastructure, and to dengue due to vector breeding sites formed by deposited debris. In coordination with the WHO and the Philippine Department of Health, CDC experts working within UNICEF developed rapid response plans for potential outbreaks of acute watery diarrhea and dengue. This team also conducted large-scale preparedness workshops for partners operating in the affected region. The program will be expanded beyond the original affected areas to a national preparedness scheme.

As of February 2014, the death toll from Typhoon Haiyan was 6,201 persons with 1,785 people still missing. Thousands of families remain in temporary tent housing. Electricity in the region is inconsistent. Rural communities and less traveled roads remain under-assisted and poorly recovered. The farming, fishing, timber, and tourism industries have been severely damaged.

As the affected region recovers, CDC remains committed to providing support to the Government of the Philippines.