Early Diagnosis Benefits Everyone: Reducing the incidence of tuberculosis through improved TB screening

Lerato Tshabalala  was struggling with a persistent cough, which was not uncommon at her school, especially during the winter months. Her grandmother, with whom she had lived since her mother’s death, encouraged regular school attendance towards getting a good job in the future.  One day, when the District School Health Team visited her school, the nurse asked Lerato to visit her local clinic to enable collection of a sputum sample for laboratory TB screening to check for tuberculosis (TB), and was provided with a referral letter. The following afternoon after school Lerato, accompanied by her grandmother, visited Freedom Square Clinic.

Tuberculosis has plagued South Africa for over 300 years and, despite concerted efforts through the decades, it has not been beaten. As with many communicable diseases, TB flourishes in conditions of poverty.  Malnutrition, crowded living conditions and poor housing all contribute to the occurrence and spread of the disease. While much is being done in the country to alleviate poverty and promote healthy living – thereby contributing to preventing TB – much remains to be done to diagnose and cure the disease.  Early diagnosis facilitates treatment and limits its spread. 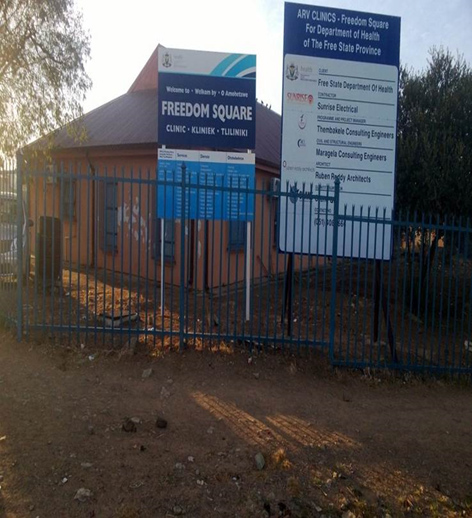 Freedom Square Clinic derives its name from an upgraded informal settlement. It is a primary health care facility in Mangaung Metropolitan Municipality in Free State Province, serving a population of about 36 850 people in a daytime-only, five-days-a-week facility. On arrival at the clinic, Lerato’s referral letter made clear the purpose of her visit and, after a short wait, she was called to a consultation room for TB screening. A sputum sample was collected and her return date was agreed on to receive the test result.

In December 2013, the Joint United Nations Program on HIV/AIDS (UNAIDS) initiated a strategy towards ending the AIDS and TB pandemics.  The ‘Fast-Track’ strategy with its ‘90-90-90’ targets was adopted in December 2014 and a commitment was made to achieving the new and bold targets whereby South Africa aims, by 2020, to have:

Sister Mosele Sani, Freedom Square Clinic’s Operational Manager, was concerned in December 2013 when she noted that the clinic’s TB screening rate was only 47%. Through a concerted effort by the facility staff and supported by Health System Trust’s SA SURE project, this rate increased to 87% by December 2014, with a peak of 99% in September. The clinic’s improved TB screening rate, and the ways in which it was achieved, offer ideas for other facilities to introduce similar improvements, thereby contributing to achieving the first of the 90% targets for TB control.  As with any improvement in health service delivery, sustaining the improvement is always a challenge.

Fortunately, in this case, the clinic’s health information records show that the improved TB screening rate was not a once-off improvement. The noteworthy gains between December 2013 and December 2014 have been sustained and the monthly TB screening rates following the intervention through to March 2016 are seldom below 80%, with many being recorded in the upper 90s.

The noteworthy change in the clinic’s TB screening rate began with a Leadership Development me in early 2014 involving the facility staff. A Challenge Model process, as designed by Management Sciences for Health, provided a framework for identifying gaps in the clinic’s service delivery, of which the low TB screening rate was one. The model prompts linkage of the facility’s mission and vision to its actual outputs, while identifying desirable and measurable outcomes. The Challenge Model’s Fish-bone Analysis technique, together with identifying the root causes of the identified gap in service delivery, assisted the clinic staff in developing a Quality Improvement Plan (QIP).

The QIP formed the basis of this health system strengthening intervention. The related health indicators were routinely monitored on a monthly basis and the results were evaluated in the facility’s review meeting. The SA SURE Facility Mentor conducted regular coaching sessions with individuals and groups linked to TB screening and mentored those responsible for reaching their monthly TB screening targets.

The intervention benefitted from positive engagement by all key stakeholders, which triggered a general change in attitude towards TB management. One finding of the problem analysis was the lack of the standard TB screening tool, so the staff took the initiative and designed an improvised tool while awaiting receipt of the standardized tool. Thereafter, every member of the staff engaged in TB screening activities in the facility.

Arising from the clinic staff’s regular review of the TB screening data and subsequent discussion on the QIP activities, additional ideas for strengthening the intervention have been discussed, with steps taken towards implementation. One successful outcome was to assign a dedicated community health worker to conduct TB screening at the clinic, and for this TB screening to take place at the clients’ entry point into the facility in keeping with the requirements of the Ideal Clinic strategy.

The intervention to increase TB screening at Freedom Square Clinic has yielded some interesting lessons. Positive results flowed from engaging key stakeholders in the process and their involvement led to a broadening and deepening of ideas.

What did this mean for Lerato? On her return to the clinic for her sputum test results, she and her grandmother were delighted to learn that her TB test was negative. The nurse prescribed some cough mixture, although her cough was by then already much better. Importantly, Lerato’s grandmother was given advice on more healthy nutrition, especially during the winter months, and she was referred to the local social worker for help in applying for a child support grant. The additional funds would ease the grandmother’s financial burden and support the suggested changes in diet.