A Wealth of new Strategies: Meeting the integration challenge

An old man sitting outside Empathe Clinic in Dundee was remarking to casual listeners that far fewer community members were waiting for services, both within and outside the facility. Was this not proof, he asked, that the nurses were chasing patients away? The health services were declining at the clinic, he claimed, and the community no longer wished to use the services. 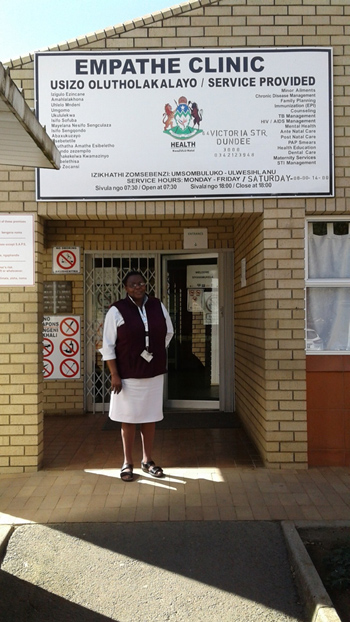 It so happened that one of the passers-by that morning was the District Co-ordinator for Health Systems Trust’s SA SURE project in uMzinyathi District. She knew that the old man’s observation – that fewer people were waiting for services – was actually the successful outcome of years of hard work by the clinic staff supported by her project’s team members, in changing the way the services are delivered. The improvements included halving the patients’ waiting times from five to two-and-a-half hours – and this through delivering more efficient rather than sub-standard services.

The District Co-ordinator explained to the man that fewer people were waiting at the clinic because the Clinic Manager and her staff are successfully implementing new strategies. On reflection the man acknowledged that, rather than arriving long before the clinic opened to get a better place in the queue, being given an appointment at his previous visit actually suited him better. It allowed him time to take his cattle out to graze in the morning before he came to the clinic.

“I was so accustomed to being checked at the clinic each time that I did not believe that I could receive my medications from another source, and then just collect it and still be able to do my other chores in town.” A chronic client

Many community members appreciate the improvements they have experienced at the clinic and in March 2016, a client survey scored a 92% satisfaction level. The clinic’s extended opening hours, and especially that from 2012 it opens on Saturday mornings, enable community members to use the health services outside of their working hours. This change actually resulted in an increase in client numbers by almost 2 000 per month.
Over the past five years or more, numerous health service strategies aimed at improving the quality of service delivery have been introduced in South Africa. The changes place considerable demands on the existing services, and especially on the facility staff – but the new strategies also bring advantages. Empathe Clinic exemplifies a facility that has successfully integrated the new strategies into its existing services, suggesting that Sister Myaka and her team are worthy recipients of their numerous awards and certificates.

Rather than having the people coming to the health facilities for services, some of the new strategies take the health services to the people. In 2009 the National Department of Health introduced Primary Health Care (PHC) re-engineering, using initiatives such as the District Clinical Specialist Team, the Ward-based Outreach Team and the School Health Team.  This strategy, together with the more recent Centralized Chronic Medicines Dispensing and Distribution (CCMDD) program, led to annual client numbers dropping from 16 000 to 11 000. The CCMDD is estimated to have contributed more than half of this improvement.

Through the CCMDD program almost 1 800 clients now collect their chronic medication from one of seven convenient pick-up points in the community. The pre-packaged chronic medication is issued for a two-month period, and clients only return to the clinic every six months for a check-up, collection of blood samples and a new prescription. A domestic worker confirmed how pleased she was about the two-monthly issue of medication, as she had been finding it difficult to ask for a day off every month to attend the clinic. Chronic medication clients who do not yet qualify for inclusion in the CCMDD program can collect their medication via a “fast-queue” at the clinic, thereby avoiding waiting in the general patient queue.

The relocation of eligible patients to the CCMDD program is happening at a very opportune time as the Minister of Health’s new ‘test and treat’ policy, whereby HIV-positive clients’ CD4 count will no longer determine their eligibility for treatment, starts on 1 September this year. The clinic is bracing itself for an influx of new patients being enrolled for treatment.
While some new strategies relieve the pressure on the healthcare facilities, others look at improving the quality of the services.

The National Health Insurance (NHI) strategy, carrying the vision of universal healthcare for all citizens, led to the National Core Standards that sets standards for healthcare quality. From this initiative grew the Ideal Clinic Realization and Maintenance (ICRM) strategy, with multiple demands for changes in the way clinical services are managed, such as improved patient administration systems, including computerized, electronic medical records for managing patient information in the facility. For Empathe Clinic, an important outcome of this process has been the introduction of an appointment system to streamline the flow of patients and enable successful follow-up of treatment defaulters.

Empathe Clinic’s baseline assessment at the start of the Ideal Clinic initiative scored only 57%. Eighteen months later, in March 2016, the clinic scored an encouraging 82% and work continues to reach the elusive 100%. A major advance has been contracting a sessional doctor at the clinic for three mornings a week. Furthermore, each consulting room is now a fully ‘single-stop’ service, ensuring that clients do not have to queue and re-queue for different health issues.

Close on the heels of the ICRM initiative was the UNAIDS 90-90-90 strategy’s bold targets to strengthen the diagnosis and treatment of HIV and TB. True to form, and despite an initial reaction of, “Oh no, not another new idea”, the clinic has adopted and is successfully integrating the new strategy into its daily operations.

A tribute to the successful health system strengthening efforts at Empathe Clinic is reflected in a community member’s message to the clinic’s Operational Manager. In her message she expressed relief that she no longer spends a whole day every month collecting her chronic medication at the clinic, and shared how empowered she felt having been well informed about the CCMDD program, and that she is now responsible for managing her medications herself. The clinic staff report that the community is displaying a growing sense of ownership of the services and are much more co-operative. A professional nurse shared that, because routine patients do not have to be seen by a nurse each time, she feels she is able to provide a better service to her remaining clients.