In 2019 Honduras faced the largest recorded dengue outbreak in its history. The largest department, Olancho, jumped from 70 reported cases in 2018, to more than 600 in 2019. After eleven children under the age of fifteen died from dengue, Dr. Ofelia Martinez of the Olancho Health Department was determined to make a change.

Dengue, a viral disease spread through mosquito bites, is an ongoing risk in many parts of Central and South America, Mexico and the Caribbean. It can take up to two weeks to develop symptoms such as fever, headache, nausea, vomiting, and muscle and joint pain. Generally, symptoms last less than one week. But dengue can become a severe medical emergency within a few hours, usually requiring hospitalization. In severe cases, uncontrolled bleeding, shock, organ failure, and death can occur.

Dr. Ofelia Martinez, a CDC-trained disease detective with the Honduras Ministry of Health (MOH), knows how to collect, analyze, and interpret data to contribute to evidence-based decisions.  Dr. Martinez used training received from CDC’s Central America Regional Field Epidemiology Training Program (FETP), to evaluate the ongoing dengue control efforts in Olancho, and to identify data collection gaps and other areas for improvement. The Central American Regional FETP  was initiated in 2000 with CDC support as part of efforts to rebuild public health infrastructure following the 1998 hurricanes that devastated the region. With the FETP, CDC has reached over 70 countries and has trained field epidemiologists around the world.

Martinez and her team tracked the number of cases and deaths caused by dengue in 2019 in Juticalpa, a city of 55,000 people in central Honduras. Working as one unit, her team brought together all the logistic and human resources available to tackle the hardest hit areas of Juticalpa. Despite their ongoing efforts, dengue cases and deaths increased every week. During the second week of July, the 28th week of the outbreak, the largest number of dengue cases was reported in Juticalpa.

Martinez and her team developed a new strategy to curb the spread of dengue. They divided the city of Juticalpa into four sectors. “In each sector we collected detailed data, including the number of people living in each neighborhood. We then identified a chief in each sector to lead dengue prevention efforts. The chiefs were responsible for data collection.  We also challenged them to improve fumigation and community outreach efforts in their sector,” said Dr. Martinez. 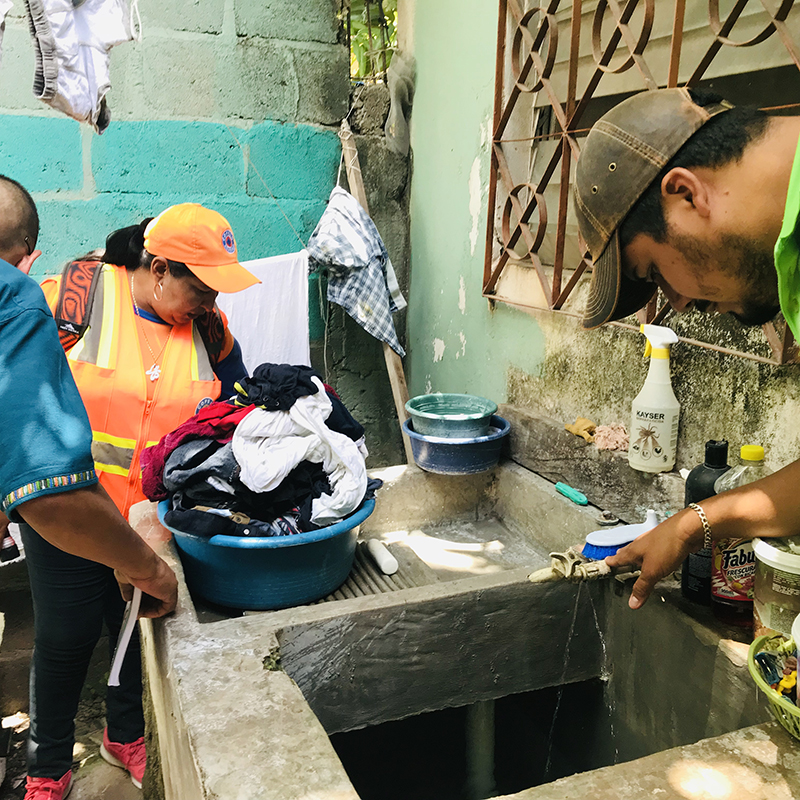 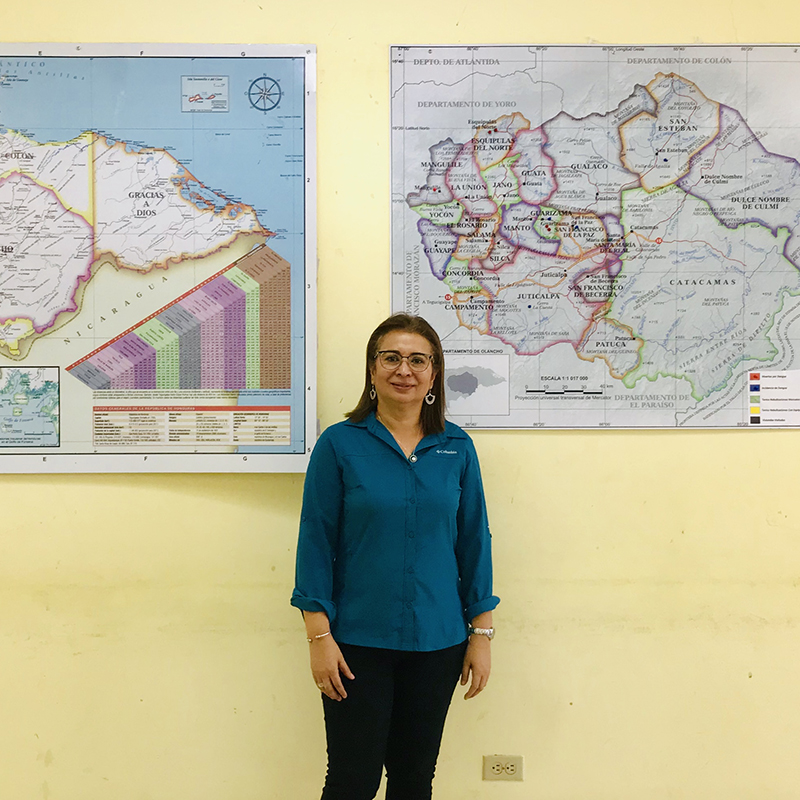 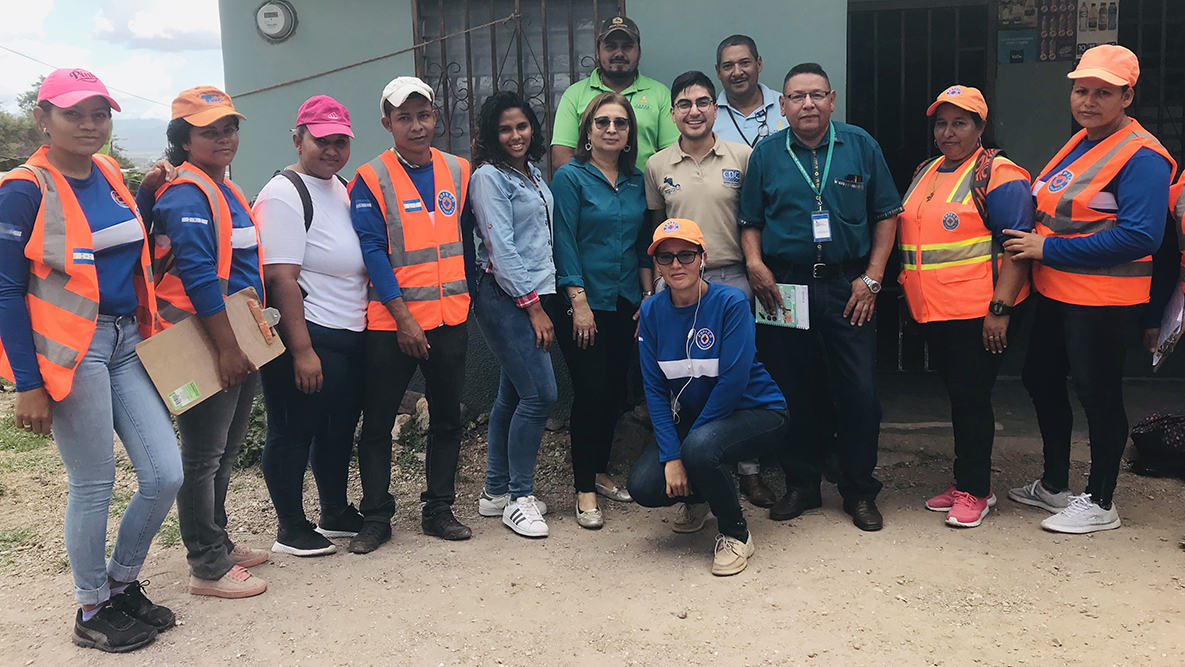 With the city of Juticalpa divided into sectors, and sector chiefs ready to mobilize their workforce, it was time to evaluate and improve the current data collection methods.

A volunteer workforce across Juticalpa was recruited. Volunteers conducted community outreach in their neighborhoods.  This was taking place as the number of dead bodies continued to accumulate. Dr. Martinez quickly noticed that this volunteer workforce was not familiar with dengue prevention methods and could benefit from additional supervision and mentorship.

With Martinez’s support, the Olancho health department took on oversight of the community chiefs and volunteers. Community chiefs were encouraged to use data for action in their respective sectors, while volunteers were trained to collect data systematically and identify mosquito breeding grounds. Together, local MOH staff, sector chiefs, and volunteers spread across their neighborhoods to look for standing water and educate the community on how to eliminate mosquito breeding areas. Martinez learned about this community mobilization strategy during her FETP experience. Under the direction of the sector chiefs, and with the institutional support of the governor, Dr. Martinez and her team gathered over 100 volunteers and a coordinated response.

More organized than ever before, Dr. Martinez and her team sent units of public and environmental health volunteers to visit all homes in each sector, inspect all open water sources, and teach families how to properly clean their water tanks and barrels. With community support, 16 new fumigators were purchased, including portable machines for remote areas. Thanks to the new data that was pouring in from volunteers and interpreted by community chiefs, Dr. Martinez and her team were able to intervene and identify more accurately the areas that required fumigation and additional home visits.

Each team developed a “croquis” sketch of their area showing the data they gathered. Information included the number of visited homes, the number of open water containers found, the number of households using BTI (specific bacteria that kill mosquito larvae), and the percentage of infestation in the community. Martinez relied once again on her FETP experience to interpret this data and determine a systematic approach to target and respond to the highest risk areas. 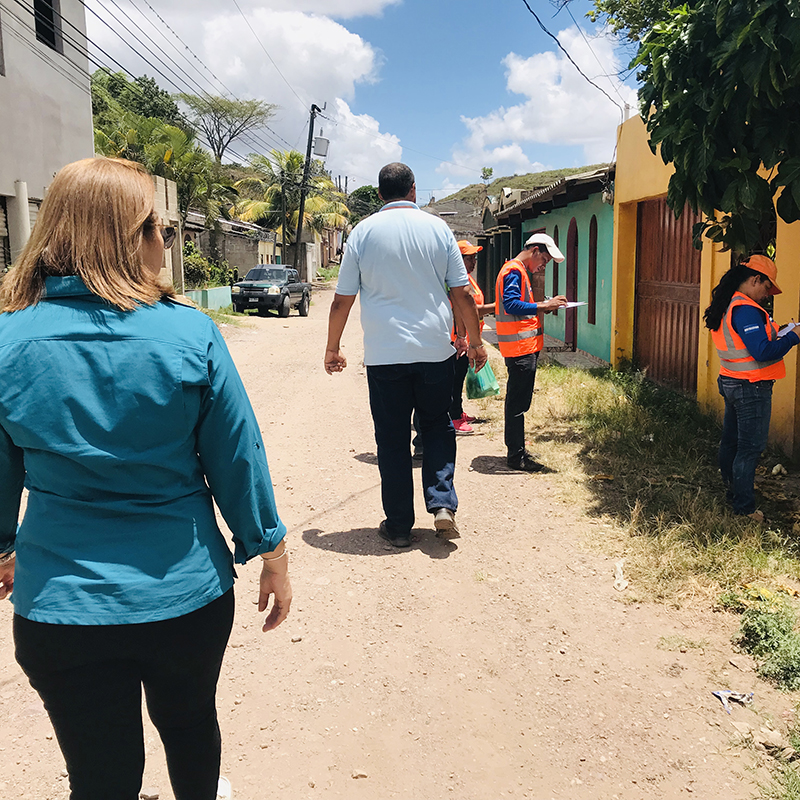 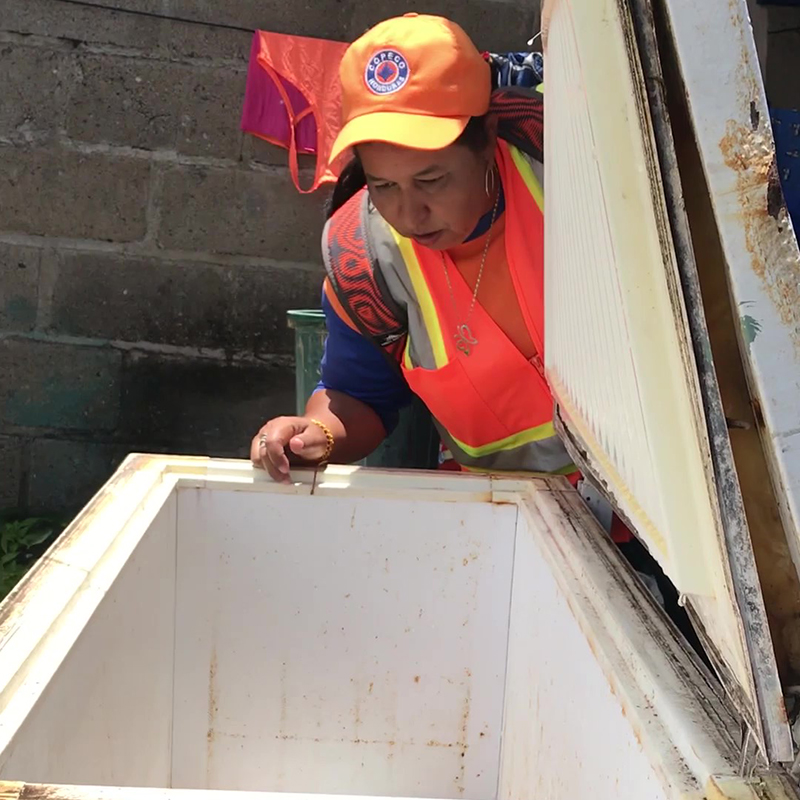 “The teams felt empowered because they know their statistics and want their sector to do well. Before our strategy, people did their work, but no one knew their statistics, the number of dengue cases in each sector, or the most affected locations. But when organized by sector, there were more people engaged with the current status of each area, and more community participation,” said Dr. Martinez.

This strategy succeeded in mobilizing Juticalpa against dengue. To date, Juticalpa has reported zero deaths from dengue since the new strategy was implemented. Martinez’s strategy has been adopted by neighboring cities like Catacamas, as well as the Yoro Department, and Tegucigalpa, the capital city of Honduras. “But when organized by sector, there were more people engaged with the current status of each area, and more community participation,” said Dr. Martinez. 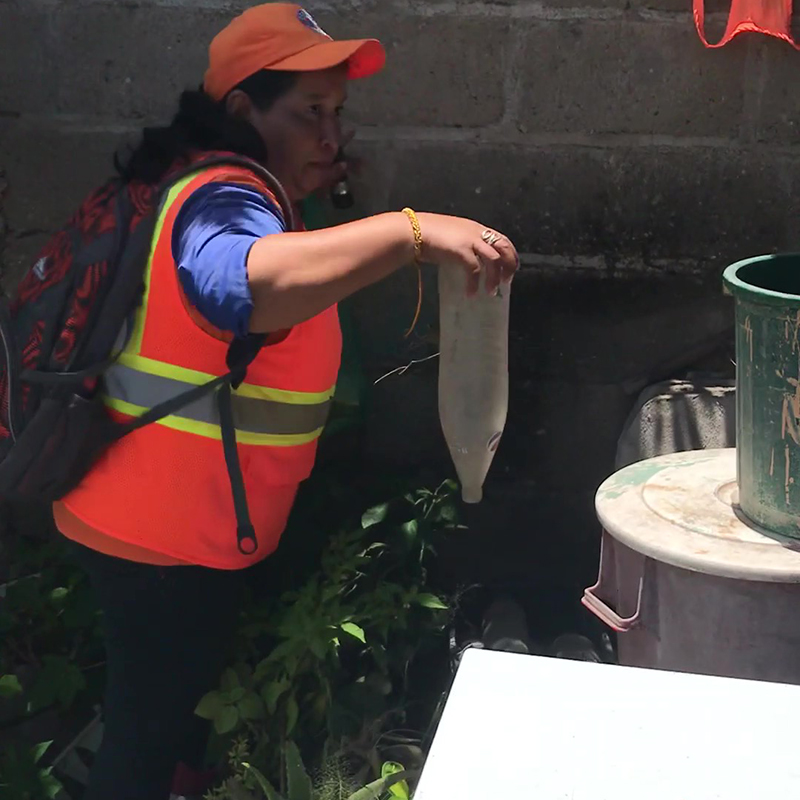 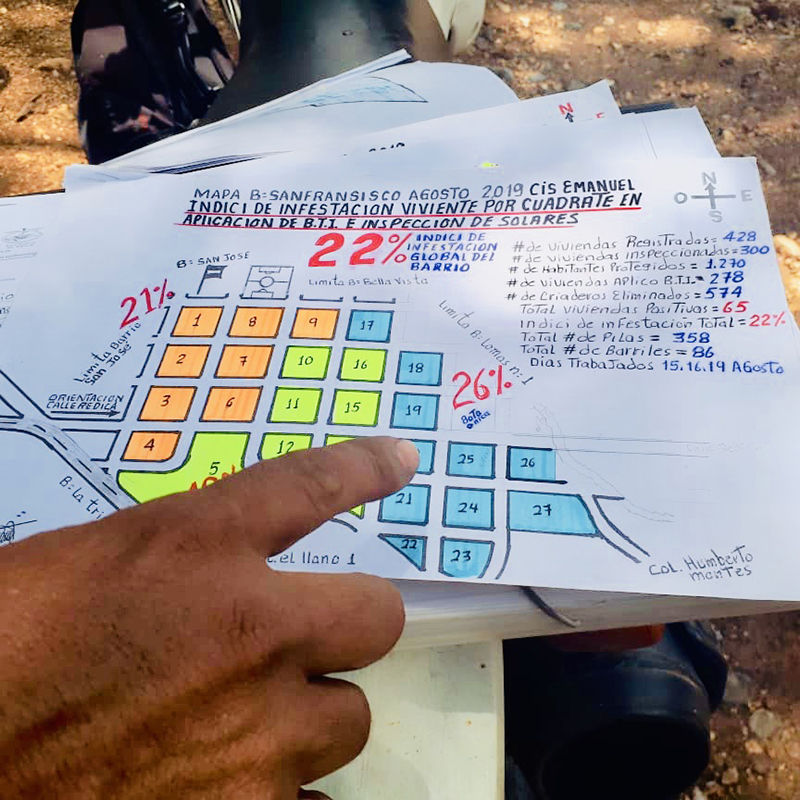 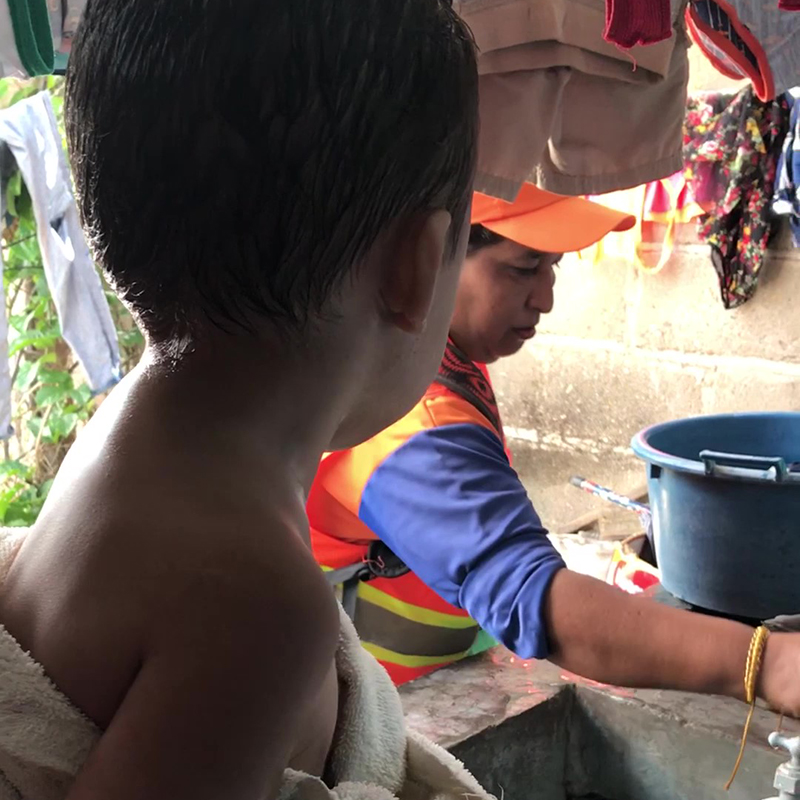 This was CDC’s biggest coordinated dengue response in the Central America region. CDC experts, including physicians and epidemiologists from CDC HQ, the Division of Vector-Borne Disease/Dengue Branch in Puerto Rico and CDC Central America Regional office, traveled to Honduras to work with local authorities to better understand the spread of dengue and identify areas for CDC support. At the request of the Government of Honduras, CDC provided assistance in entomology, epidemiology, communication, and clinical management.

In addition, CDC provided the following resources: lab reagents and supplies, entomological equipment including microscopes and field supplies, 60,000 copies of communications materials such as Spanish language dengue infographics, and medical supplies and equipment such as blood pressure pediatric cuffs.