Betty Sithole hurried to board the taxi so that she could reach the clinic before it closed. To finish earlier than usual, she had rushed through her day’s chores as a domestic worker in the suburb of Kloof in KwaZulu-Natal Province. Betty and her friends had often discussed the “Know your status” billboards, and with her husband’s agreement, she had decided, just as a precaution, to visit the clinic for HIV testing and counseling (HTC). She wondered if her friends would succeed in getting time off to avoid this last-minute rush for the same purpose.

Elsewhere in Kloof, the “Better Off Knowing” adverts had been worrying Mandla Buthelezi1 recently. Had he been careful enough all the time? Why was his cough so persistent? Could his endless job-hunting be so demoralizing that it was making him sick? He felt that he was forever standing in queues for application forms, attending occasional interviews, checking on the outcomes, or waiting hopefully at the casual workers’ pick-up points. With life being so tough that even earning enough for food was a challenge, it was not surprising that he was thin.

“The taxis usually fill up and leave so promptly when I travel,” Betty thought to herself. “I hope this one leaves in time. I wish the clinic would change its hours to accommodate us working people!”

The Nursing Services Manager at the Kloof Primary Health Care Clinic, Sister Bridglall, had long been concerned about having to turn away disappointed clients at closing time. In fact, with the support of Health Systems Trust’s SA SURE project staff, Sr Bridglall and her team had already explored the issue of adequately servicing the increasing numbers of clients responding to the “Know your status” campaign. So many of these clients worked full days and could not afford to take time off work to be tested for HIV – and there were many of them, as the clinic served some 6 800 people.

Early diagnosis of diseases, combined with increased understanding of the importance of preventative measures, made a valuable contribution to health systems strengthening in the area. Failure to diagnose and treat disease is likely to result in further transmission when infectious, or progression to advanced stages when not infectious.

Using the Challenge Model ‒ a technique designed to highlight obstacles to service delivery and their root causes ‒ the Kloof Clinic personnel selected and prioritized remedial actions. The staff members were coached and mentored by the SA SURE Nurse Mentor in conducting a bottleneck analysis, through which they evaluated potential methods for increasing access to the clinic’s HTC services.

The clinic team decided to launch a community outreach intervention, focusing initially on two groups: domestic workers, who struggle to visit the clinic during opening hours, and the numerous job seekers in the area, who have to choose between job-hunting and seeing to their health issues. A quality improvement plan (QIP) was developed, designed around taking health services to a site that would be convenient for these clients without disturbing their schedules or having them wait in long queues in the clinic.

This intervention would thus also increase the clinic’s performance towards achieving the UNAIDS and the National Department of Health’s new 90-90-90 strategy targets, and so contribute to an overall improvement in the facility’s and the district’s efforts to improve their client population’s health.
A local church was secured as the clinic’s community outreach site, providing space for domestic workers and job seekers to access HTC services more easily, and allocating a room for confidential consultations. Once launched in August 2015, the community outreach program grew in popularity, with increasing attendance noted by the third week. An improvement in the related health indicators was seen in the second month of the initiative, and grew on a monthly basis thereafter. A comparison of the pre- and post-intervention monthly averages (July/August against September to December) of the 15‒49-year age group provided with HTC services rose by 44% from 225 to 404 clients, with a high of 499 in November. 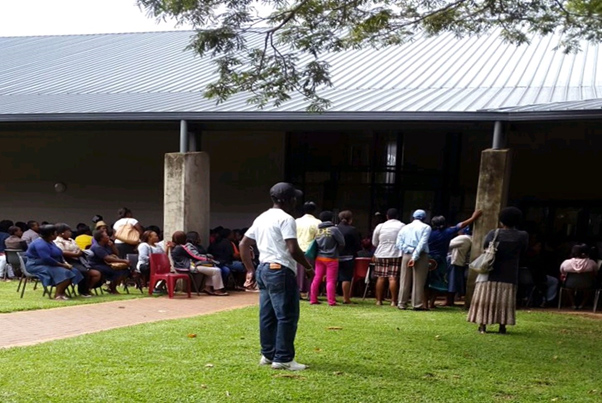 The outreach program proved so successful that it was later expanded beyond the HTC services to include cervical screening and condom distribution. Condom distribution more than doubled from a monthly average of 5 360 to 11 160, while the averages for cervical cancer screening rose from six to 16 clients per month during the intervention’s first three months. Close linkages with the community resulted in all of these screened clients receiving their results. Twenty-eight women were transported to the hospital for further treatment, as were other clients needing procedures that could not be conducted at the outreach site.

The facility staff took the initiative to make the project work: even when absenteeism led to a shortage of capacity, the clinic would still release staff for the outreach program to ensure that there was no break in service delivery. The health workers were prepared to walk to the outreach site when transport was a problem, and the Health Systems Trust vehicle often delivered medication and resources and transported staff.

The close involvement with the stakeholders, including the clients and community caregivers, and the clinic staff’s commitment to the program, led to strong local ownership, laying the foundations for a sustainable intervention. Recent figures show that visits to the outreach facility have risen to around 650 per month. In addition to the planned services, other health issues have been identified, including hypertension, diabetes, new pregnancies and clients needing further management after cervical screening.

This initiative also illustrates how building an effective relationship of mutual understanding and establishing a trusting dynamic between the mentor and staff mentees is a critical component in health system strengthening interventions.

Both Betty and Mandla were relieved when they learnt about the community outreach program as a new format for healthcare delivery that brought services to them. Enrolling in the program confirmed their health status, and the treatment and care they received supported their improved wellbeing.