Ending Stigma to Provide TB Treatment for All

In March 2020, a distressed woman called the TB HIV Care’s Sex Worker Program in uMgungundlovu District, KwaZulu-Natal Province. She was alone on the street outside the clinic, worried that she may have drug-resistant tuberculosis (DR-TB).

Before she could be referred to the district’s specialized DR-TB hospital, Doris Goodwins, she needed a positive culture TB test and a COVID-19 test. However, trouble arose when a clinic worker discovered she is a sex worker and may have DR-TB, both of which are stigmatized in South Africa. As a result, she was told to wait outside the clinic gate.

Stigma related to being a sex worker and having DR-TB is common in South Africa, and it contributes to people not seeking health services, which drives TB transmission. In a country with one of the highest incidence rates of TB globally (737 per 100,000, according to a TB prevalence survey) and where TB has been the leading cause of death for more than a decade, stigma has deadly consequences.

The TB HIV Care’s Sex Worker Program, which is supported by the U.S. Centers for Disease Control and Prevention (CDC), drove to the local clinic to get her. She took a TB culture test and a COVID-19 test and  was admitted to the Doris Goodwins TB Hospital the same day. 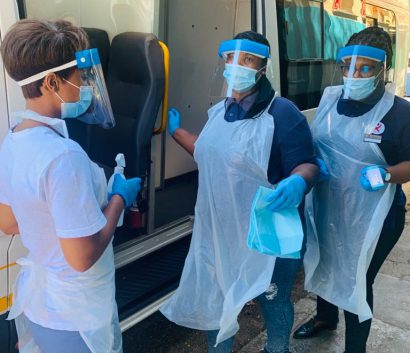 TB HIV Care Sex Worker Programme team from Umgungundlovu dressed in personal protective equipment about to go out on outreach. From the left is Thandiswa Booysen, in the middle is Thobisile Shezi and Sindisiwe Magubane.
Credit: Supplied by TB HIV Care

She received testing and care, but many others are not as lucky. The TB HIV Care team reported her initial bad experience to clinic management to ensure it doesn’t happen again.

“We were able to offer sensitization training to the staff involved in the incident to avoid future challenges. A direct referral pathway for sex workers seen by the TB HIV Care team was developed with Doris Goodwins TB Hospital so that vulnerable population groups, such as sex workers, do not have to visit the clinic before being referred,” said Ntombifuthi Luthuli, TB HIV Care Sex Worker Program site manager.

Katlego Motlhaoleng, CDC’s public health specialist responsible for the TB program, commended the TB HIV Care team for offering sensitization training to the clinic staff and ensuring that the patient is promptly linked to care. “We have the responsibility to advocate and promote the most appropriate care for people living with HIV and TB. I cannot stress the importance of ensuring that every person seeking TB/HIV services is treated with dignity and not discriminated against because of their health status,” said Mothaoleng.

A year later, the woman who was told to stand outside the clinic gate because she may have DR-TB, is on treatment, has maintained good adherence, and is recovering nicely, according to Luthuli. Proactive community collaborations, thoughtful training, and providing space for people to feel safe will not only reduce stigma but save the lives of those most vulnerable.

I cannot stress the importance of ensuring that every person seeking TB/HIV services is treated with dignity and not discriminated against because of their health status.