A Tale of Two Countries During COVID-19,
Part One: Vietnam

In this January 2020 photo, CDC Vietnam Country Director John Blandford mugs at a Hanoi bus stop that features the K=K (in English, U=U, or Undetectable=Untransmittable) public health campaign which advocates for access to HIV services and to reduce HIV-related stigma and discrimination.
Photo by Pham Thanh Hiep/CDC

Over the past year, John Blandford, PhD, has been in a unique position to witness and support the global COVID-19 pandemic response as country director in not one but two parts of the world: Vietnam and South Africa.

Blandford began his career at the agency as a post-doctoral fellow in the Division of STD Prevention two days before the terrorist attacks on September 11, 2001. Two years later, he moved over to the global AIDS program, now called the Division of Global HIV and Tuberculosis (DGHT). This was just as the U.S. President’s Emergency Plan for AIDS Relief (PEPFARexternal icon), which supports HIV/AIDS prevention, care and treatment programs in developing countries, was starting. He’s been involved in PEPFAR and the global HIV response nearly his entire career at CDC.

But like all colleagues who work overseas, Blandford also deals with other outbreaks along the way—like Ebola and Zika in recent years, and currently, COVID-19.

Given his firsthand experience in two countries with very different COVID-19 pandemic experiences, we asked Blandford to spend a few minutes with us and share some of his observations in a two-part series. Part 1 reflects his experience in Vietnam.

What was your role as country director for CDC Vietnam?

Blandford: I wore two hats during my time in Vietnam. I was the DGHT program director, in charge of the HIV and TB team in Vietnam, and CDC country director, too.

Vietnam has had remarkably few COVID-19 cases compared to most countries. How did you see the pandemic unfold in this country?

Blandford: When the pandemic began, Matt Moore, the head of the Global Health Protection program for CDC Vietnam, and I were on leave for the Tet holiday, which is the Vietnamese Lunar New Year. I was actually vacationing in Thailand at the time.

COVID-19 was all over the news. China had just announced the first COVID-19 death on 12 January 2020. It was truly concerning, but it had not yet surfaced in Vietnam. Then I got a call from Matt that the Vietnamese government was already starting to mobilize around COVID-19 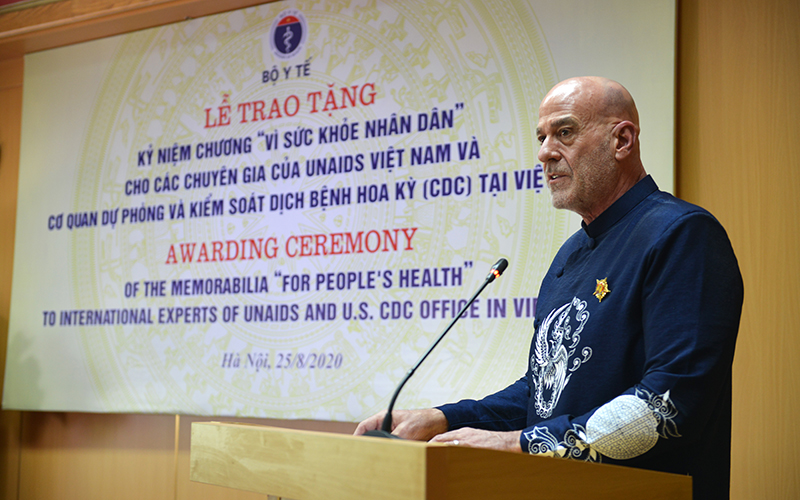 Why do you think the Vietnamese government reacted so quickly?

Blandford: It was clear that the Vietnamese government had strong memories of the SARS outbreak of 2003. When SARS spread from China throughout Asia, it hit Vietnam significantly. SARS had not only a health impact but also a substantial economic impact at the time.

Vietnam is a lower-middle income economy but growing very quickly. It shares an 800-mile border with China. Vietnam is a close trading partner and part of the manufacturing supply chain, making components that are shipped to China for final assembly. So, there’s all this trade going back and forth between the two countries.

The economic concerns were as much at the forefront as the health concerns. I think, to the credit of the government of Vietnam, they realized very quickly that COVID-19 was going to be an issue that could affect them profoundly.

How was CDC Vietnam positioned to help this country in their early response to the pandemic?

Blandford: CDC Vietnam has strong relationships with the epidemiologists at CDC in Atlanta and the epidemiologists at the Vietnam Ministry of Health (MOH). While the largest program CDC has in Vietnam is the HIV program, we also have a substantial Global Health Protection Program. We also have experts on tuberculosis and influenza. I think that really helped set up CDC well at the time, so that when COVID-19 hit Vietnam in the third week of January 2020, we were ready to assist.

What kind of technical support did your team provide?

Blandford: We assisted on multiple fronts. We made resources available from across CDC Vietnam to respond to this outbreak. The Global Health Protection program led CDC Vietnam’s response, but we drew widely from resources across all our programs there. Laboratory, epidemiology, infection prevention and control—those are all places where the HIV, TB, and influenza programs could put people toward the COVID-19 response. 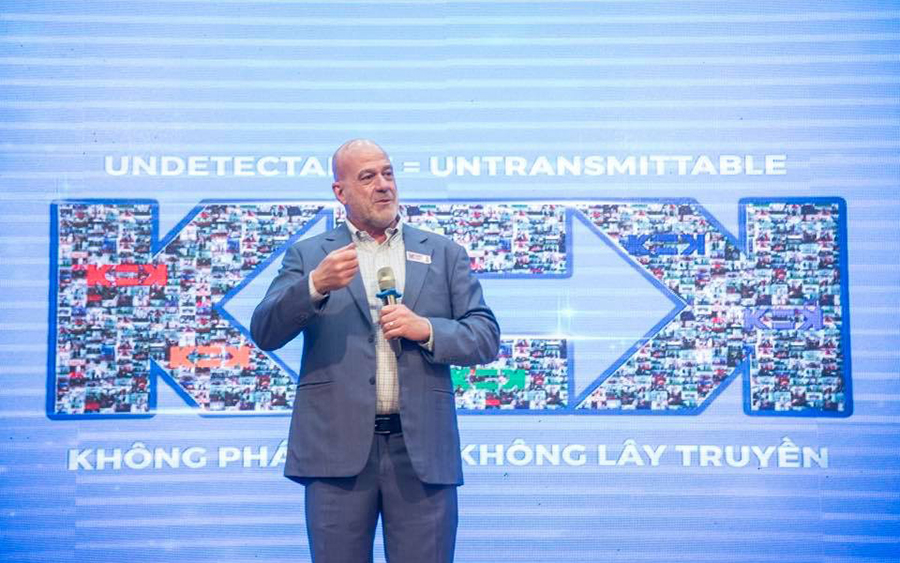 Blandford speaks at a gathering of community-based organizations supporting the K=K (in English, U=U, or Undetectable=Untransmittable) campaign in Vietnam in November 2018.
Photo by Pham Thanh Hiep/CDC

We could also move staff from the administration and management side as well to help coordinate the efforts. So it really showed the advantages of CDC having a robust global health security program with strong relationships already in place within key parts of the government of Vietnam.

Again, I give a lot of credit to the government of Vietnam. In many cases they incorporated our advice. In other cases, they made decisions that worked well for Vietnam which might not be easily accepted in other countries. I think a good example of action the government took was early in the pandemic when there was a cluster of cases north of Hanoi, in a rural municipality called a commune. The Ministry of Health decided to quarantine the entire commune, closing off and limiting access to and from this community. This would be very hard in to do many other countries, but the population there went along with it.

How did this help?

Blandford: They basically kept the infections from the cluster in that community, contained the virus there, and that basically snuffed out community transmission.

What I saw in Vietnam is that there was an overall understanding in society that we’re in this together and that our individual actions contribute to the community’s health.

Masks were readily worn too. In Asia, it’s common to put a mask on if you have a cold, and it’s impolite to not wear masks in public when you have a cold. It’s natural. It’s accepted that, by putting a mask on, I’m protecting folks around me – it protects others. Of course, the use of masks isn’t perfect, but you don’t need it to be perfect. Sometimes pretty good can be good enough from a public health perspective.

Wearing masks to protect others in the community was especially impactful in densely populated areas like the city of Hanoi, which has nearly 10 million people. So, it’s just a nice consideration and good etiquette to cover your face. It was so powerful to see how effective these public health measures were when exquisitely applied.

It also spoke to the importance of having the population on board and seeing this as a joint response and joint benefit. It really speaks to sort of a different approach to seeing community responsibility—community cohesion—that really works well in a public health response.

What impact did this approach have?

Blandford: I think the first time around there was no spread of COVID-19 for 99 days, and then some cases popped up. Then in the second round, there were nearly 90 days of no community transmission. So, with that, health officials knew they could shut it down and contain the spread of COVID-19. Importantly, Vietnam never gave up on containment of COVID-19, unlike other countries which moved away from containment and on to mitigation strategies like wearing masks, hand hygiene, travel restrictions, school closures, and social distancing.

What other approaches were taken?

Blandford: I will tell you even early in the first wave there were very few cases – I think about 17 cases at the outset. The Ministry of Health recognized early on that it made sense to train many contact tracers. The early cases also provided an opportunity to practice and strengthen procedures. You do it as a way to stretch your public health muscles and to get prepared for something bigger.

We also learned right away, in those first weeks of January, that Vietnam got prepared to be able to quarantine 30,000 people at a time at the borders. They did this within a month’s time. In border areas, they moved soldiers out of barracks and into tents. Then the barracks were converted into quarantine facilities, so that everybody who re-entered the country would automatically go there and go into two-week quarantine.

Vietnam’s government did that by the end of February 2020. They established similar isolation facilities starting in big central hospitals, but also creating isolation areas elsewhere. They worked to create isolation capacity at different levels in the medical system. This was not only at advanced facilities. They showed they could successfully isolate and treat people at district hospitals as well.

The MOH used the opportunity to show if you learned how to treat COVID-19 patients at a local facility, you can be prepared to do that later on a bigger scale if it becomes needed.

For someone who has been in public health for 20 years, it was extraordinary to watch just how effective the system was, how committed to disease containment the Vietnamese were, and how effective it could be with a whole-of-government response and whole-of-society cooperation.

Check out “A Tale of Two Countries During COVID-19, Part 2,” where Dr. Blandford describes moving from Vietnam to South Africa during the COVID-19 pandemic.

Vietnam Responds to COVID-19 with Technical Support from CDC