THE CHALLENGE: During the 2014 Ebola outbreak, Sierra Leone lacked an effective infectious disease reporting system. Such a system would have resulted in earlier notification of the disease, and may have helped prevent the epidemic.

2.8 million Children in Sierra Leone were vaccinated against measles during campaigns this year.

Time is of the essence to prevent clusters of illness from turning into disease outbreaks. Public health workers can take action to prevent the spread of disease, and thereby prevent illnesses and deaths, when authorities are alerted quickly about a disease occurrence. When Ebola struck in 2014, Sierra Leone lacked an effective infectious disease reporting system. Such a system would have resulted in earlier notification of the disease, and may have helped prevent the epidemic that claimed thousands of lives.

The situation in Sierra Leone has since changed. In just 10 months –between November 2015 and September 2016– Sierra Leone’s disease reporting increased from 35% to 96% of health facilities reporting weekly data.  Through Global Health Security Agenda resources, this West African country now has an effective Integrated Disease Surveillance and Response (IDSR) system. The IDSR system in Sierra Leone now monitors 44 diseases, conditions, and public health threats. A single case of epidemic-prone diseases, such as viral hemorrhagic fevers, yellow fever, and cholera are now reported within 24 hours by local and district public health facilities to the national office of the Ministry of Health and Sanitation. 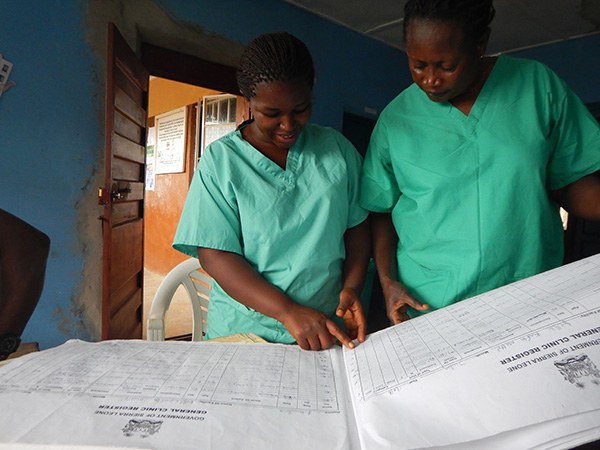 Benefits of Sierra Leone’s IDSR-based national surveillance system include helping prevent an Ebola flare-up from spreading. In January 2016, enhanced surveillance quickly detected and identified a new case of Ebola, leading to rapid and effective control efforts. Beyond Ebola, the IDSR system is helping identify suspected cases of other diseases, such as rabies and measles. The IDSR system also helped increase the reporting of measles cases, prompting the launch of nationwide measles vaccination campaigns.

To enhance IDSR activities, CDC provided further technical help to improve data quality and rolled out the electronic IDSR (eIDSR) platform across Sierra Leone. The electronic systems can capture IDSR data on any device, including desktops, laptops, tablets, and smartphones. Most systems also have the capability to be used off-line, which is especially helpful in areas with poor internet connectivity. Now all districts electronically report their IDSR data to the national level.

The electronic system has also reduced the number of data entry errors in half, and is capturing and verifying data 60% faster than the paper-based IDSR system. The eIDSR system builds on the existing District Health Information Software (DHIS2) currently used in 47 countries across four continents, which can also quickly produce maps and graphics to show disease trends.

The eIDSR enhances Sierra Leonne’s preparedness to identify and respond to outbreaks and prevent outbreaks from unnecessarily developing into epidemics as was the case with Ebola in 2014. By rapidly capturing health data that is easy to understand, health officials will know where to target resources that can slow the spread of a disease both within country and beyond the borders.

CDC is working with 31 priority countries to develop global health security capabilities, which protect Americans and people around the world from disease threats. This story illustrates Sierra Leone’s commitment to:

Sierra Leone will continue to work with CDC to strengthen its disease surveillance systems that detect events of public significance. This work ensures that Sierra Leonne, and therefore the world community, is safe from disease threats.