In South America, the Venezuelan people are experiencing a desperate humanitarian crisis. With the collapse of the country’s economy and healthcare systems, more than three million people (~10% of the population) have migrated out of the country since 2015. The United Nations projects that a total of 5.3 million Venezuelans will leave their homes by the end of 2019. The massive influx of refugees into Brazil, Colombia, Ecuador, Peru, Panama, and beyondhas elevated global health security risks and has led to the surge of preventable diseases in the region.

Experts from CDC are on the ground in Colombia and other countries, finding ways to help migrants and other vulnerable populations being served by overwhelmed healthcare and social systems. For example, CDC is providing public health and medical technical advice to United States Agency for International Development’s (USAID) Office of U.S. Foreign Disaster Assistance (OFDA) Venezuela Regional Crisis Response Team. “Our technical assistance to OFDA’s disaster assistance response team includes assessing current health trends along the Colombia-Venezuela border, supporting colleagues in the region to determine the health needs of those affected, as well as identifying opportunities to support the government of Colombia’s response,” said CDC’s Mark Anderson. 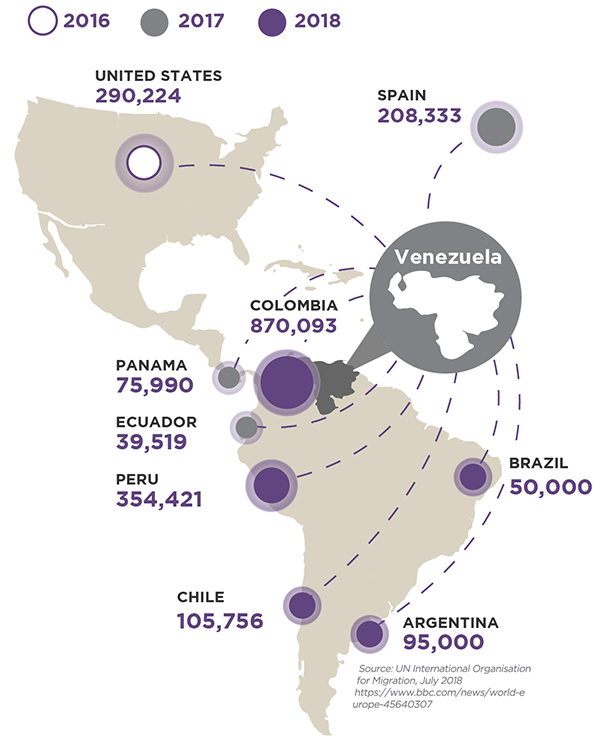 A resurgence of measles in South America began in July 2017, when a new case was reported in Venezuela. This was a huge setback, as the previous year the WHO Americas Region had celebrated its elimination of measles as an endemic disease. “This success was the result of more than 20 years of heroic effort at the local, national, and regional levels,” said CDC’s Robert Linkins. Since the reemergence of measles, Venezuela has recorded over 6,200 cases in 2018. Because the epidemic in Venezuela has lasted more than a year, measles is once again considered endemic in the country.

Linkins said that, among those 6,200 confirmed cases, at least 76 people have died. “This outbreak is now spreading throughout the Americas. Measles outbreaks have been reported in Brazil, Colombia, Ecuador, and Peru.” In 2018, Brazil recorded 10,000 cases and 12 deaths.

At the same time South America was contending with a measles outbreak, a major outbreak of diphtheria was also occurring on the continent. After nine years without any cases of diphtheria, a new outbreak began in Venezuela in 2016 and remains ongoing. The Pan American Health Organization (PAHO) has recorded more than 2,000 confirmed diphtheria cases and more than 200 deaths. In response to these outbreaks, CDC, in collaboration with USAID, PAHO, and other partners, funded the purchase and distribution of measles, rubella, and diphtheria vaccines for the region. From April 2018 to February 2019, more than 8.3 million children between six months and 15 years were vaccinated.

BUILDING A CULTURE OF COLLABORATION

Additionally, CDC staff are supporting the International Organization on Migration’s (IOM) disease surveillance activities in migrant populations in Colombia and Panama. These activities complement the national surveillance systems and prepare countries for potential outbreaks before they occur. CDC, in collaboration with the Colombia National Public Health Institute, facilitated a public health emergency response and cross-border surveillance training in October 2018. The training was part of CDC’s ongoing support to enhance Colombia’s capacity to respond to public health crises, including the current influx of Venezuelan refugees. A major benefit of the training was that it brought together a variety of Colombian ministries and NGOs who had never worked together previously.

As conditions deteriorate in Venezuela, CDC experts are also supporting PAHO and neighboring ministries of health with their responses. CDC has tested clinical specimens for a wide range of pathogens, including measles, rubella, polio, Zika, chikungunya, and dengue, in its role as World Health Organization/PAHO Collaborating Centre’s regional/global reference laboratory. CDC continues to work in the region to strengthen laboratory capacity for measles, diphtheria, and other vaccine-preventable diseases. Through PAHO, CDC also supports the Venezuela Polio Laboratory when needed.

The crisis in Venezuela is accelerating the reemergence of diseases, severely undermining regional disease elimination efforts of the past 20 years and placing millions of individuals at risk. Regional and global efforts, including from CDC, are required to address these worsening conditions inside Venezuela and meet the needs of this vulnerable population.