Study to determine effectiveness of HIV prevention and treatment launched

Epicentre, a CDC South Africa funded partner that specializes in public health interventions that prevent and manage health conditions and diseases through surveillance and the promotion of healthy behaviour – has launched a three year-long survey to determine whether or not HIV prevention and treatment programmes are working and whether they will reduce the number of new HIV infections going forward. 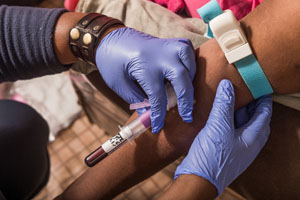 Cherie Cawood, CEO of Epicentre and one of the principal investigators of the study, said that the HIV Incidence Provincial Surveillance System Project (HIPSS), would ascertain whether HIV prevention and treatment programs that have been implemented and scaled-up over the last several years had benefitted individuals and communities and give some indication of whether or not these interventions were likely to reduce the number of new HIV infections.

The HIPSS project is being led by a team of researchers from Epicentre and CAPRISA – a multi-institutional AIDS research organization, with its headquarters at the University of KwaZulu-Natal in Durban, South Africa. Funded by the United States (U.S.) President’s Emergency Plan for AIDS Relief (PEPFAR) through the CDC South Africa – the study will be conducted in the KwaZulu-Natal Provinces’ Vulindlela, and Greater Edendale areas within the uMgungundlovu district which is one of the highest HIV burdened districts in South Africa – that has an estimated HIV prevalence of 40.7% among pregnant women (ANC survey 2012).

“There are critical questions to be answered when it comes to interventions and reducing HIV infections. The HIPPS study provides an important opportunity to study the effects of planned interventions on HIV incidence in a province that is markedly affected by the HIV epidemic. We hope that the study will successfully contribute to future policy for action,” said the CDC South Africa’s Country Director, Dr. Nancy Knight.

Cawood explained that fieldworkers would visit randomly selected households. With consent from the head of each household, they would gather data about the household as a whole, as well as individual family members, before collecting samples for analysis. All information would be treated in the strictest confidence.

“It is imperative that we have community support and that households agree to participate and provide us with accurate and reliable information. This study will show which programs are working, which ones are not and, more importantly, will influence the design of future programmes. It is critical that we reliably measure the burden of HIV, the number of new HIV infections and assess those in need of follow-up care for HIV, TB and STIs,” she said.

Cawood added that each household head and participants would be referred to clinics to access health care.In addition they would have access to all their laboratory results and would be immediately linked to care and support.

South Africa has been ravaged by the effects of the HIV and AIDS. The total number of infected South Africans now stands at 6.4-million according to The South African National HIV Prevalence, Incidence, Behaviour and Communication Survey of 2012; 1.2-million more than in 2008.

Over the past few years, South Africa has scaled up its anti-retro viral (ARV) program to one of the largest HIV treatment programmes in the world. In addition, initiatives such as the National Health Insurance (NHI), Primary Health care re-engineering and school based health care programmes have been implemented to improve health care which directly or indirectly impacts on HIV acquisition.

Dr Ayesha Kharsany from CAPRISA, the research principal investigator in the study, pointed out that monitoring the impact of these scaled-up programmes on HIV acquisition would indicate whether or not all role players were achieving their combined goal of reducing the number of infections to the point where there was “zero new HIV infection”.

“Overall, if this study provides evidence of a decline in HIV infections over time against the background of investment in treatment and prevention, it will provide a model and tools for other districts, provinces and other sub-Saharan African countries to undertake HIV surveillance and measure the impact of programmes,” she said.