Study shows many children are sick from typhoid fever in densely populated urban slums. Treatment with commonly used antibiotics is not effective against many strains.

About 200,000 people live in Kibera, a slum on the outskirts of Nairobi, Kenya, and the largest informal settlement in East Africa. With an estimated one-pit latrine for every 200 people, residents use plastic bags for relief and then dispose of them anywhere. This practice, known as ‘flying toiletsExternal’, is more common at night among women and children concerned about the area’s lack of security. Without sanitation facilities to contain and dispose of human feces, those living nearby are at risk for enteric diseases (those that cause diarrhea, nausea, or vomiting), such as typhoid fever.

Typhoid fever is caused by Salmonella enterica serovar Typhi–a type of bacteria that causes more than 20 million illnesses and kills approximately 200,000 people each year. Infection generally occurs after consuming tainted food and water or from contact with feces containing the bacteria.

In industrialized nations, illness and death from once-rampant typhoid fever is now almost unheard of—thanks to improvements in drinking-water treatment, sanitation, hygiene, and food production. But, typhoid fever remains a major problem in less developed countries. Global estimates suggest that most typhoid fever occurs in Asia. However, no large studies from Africa were available to include in the estimates.

Between 2007 and 2009, CDC and the Kenya Medical Research InstituteExternal (KEMRI) collaborated on a large study to track typhoid fever in Kibera and in Lwak, a rural area in Western Kenya. Field workers visited participants in their homes twice a week and collected information about serious illness. Additionally, researchers at the Tabitha Clinic in Kibera and Lwak Mission Hospital in Western Kenya, tested blood samples from participants with fever or pneumonia. 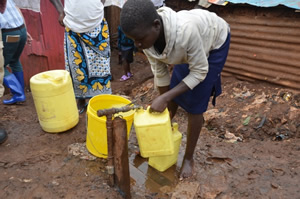 Water supply in the Kibera slums.

While the urban population in sub-Saharan Africa grows quickly from migration and new births, the lack of infrastructure produces huge new slums and a variety of public health challenges. This trend will lead to dramatic increases in diseases, like typhoid fever, linked to poor access to safe drinking water and sanitation facilities.

Even though it is an ongoing global effort, it will take years to provide piped, treated water and safe waste collection and disposal to urban slums. In the meantime, vaccinating high-risk populations against typhoid fever could keep many people from getting this deadly disease. Targeted vaccinations combined with education and products related to household water treatment, safe water storage, and sanitation and hygiene could help mothers have healthy children who do not suffer from typhoid fever and other preventable diseases.