One Year Later: Haiti Public Health System Rebounds with Help from US, Other Partners

On January 12, 2010, Haiti was hit by a magnitude—7.0 earthquake. More than half a million people died or were injured, and approximately 2 million people were displaced from their homes. Overcrowded and poor living conditions increased Haitians’ risk for communicable diseases. The earthquake destroyed most government buildings, schools, homes, hospitals, and transportation and communication infrastructure in the Western part of the country, including the capital Port-au-Prince and much of the Southeastern part of the country.

Immediately after the earthquake, the Ministry of Public Health and Population (MSPP) turned to the Centers for Disease Control and Prevention’s (CDC’s) Haiti Office in Port—au—Prince for help in strengthening the country’s public health workforce. Within 2 weeks, the ministry, the Pan—American Health Organization (PAHO), CDC, and other national and international agencies had launched the National Sentinel Site Surveillance (NSSS) System.

The NSSS has since enabled Haiti to monitor injury and disease trends and to detect outbreaks such as the cholera epidemic. It also has provided vital information about disaster-affected populations throughout Haiti so that relief efforts could be better targeted. The ministry is now maintaining the NSSS, with collaboration and support from CDC and other partners. The goal is for the system to be a long-term national surveillance system for Haiti, generating data that will help decision makers allocate resources and identify effective public health interventions.

“The NSSS could not have been launched so quickly if it weren’t for the surveillance sites that had already been established by hospitals and clinics affiliated with PEPFAR, the US President’s Emergency Plan for AIDS Relief,” noted Daphne B. Moffett, PhD, Captain in the US Public Health Service and Deputy Director for CDC′s Health Systems Reconstruction Office. In the months immediately following the earthquake, 51 PEPFAR sites provided the ministry and its public health partners with daily information via e-mail and phone, so they could target disaster relief resources where they were most needed.

In addition, Haiti’s nationwide cholera surveillance system allows hospitals and clinics to send daily cholera case counts to local ministry officials. Aggregate data are sent on to department-level officials and then to central government officials. The ministry posts daily and cumulative tallies of cholera reports on its public website (http://mspp.gouv.ht/newsite/External).

Over the past year, CDC also has worked closely with the ministry and other partners to expand the capacity of Haiti’s National Public Health Laboratory. One of the goals is to improve the quality of diagnostic testing for TB, HIV/AIDS, malaria, and rabies, which are major public health problems in Haiti.

In addition, CDC is launching a Field Epidemiology and Laboratory Training Program (FELTP) in Haiti. Working with the country′s Ministry of Health, FELTPs have a proven track record of strengthening a country′s capacity to respond to public health priorities and emergencies through mentoring and training of epidemiologists. Developing partnerships is an important element of establishing, supporting, and sustaining FELTPs, and CDC regularly collaborates with national and international organizations and other federal agencies, including the US Agency for International Development (USAID).

Because surveillance and laboratory system investments for outbreak-prone disease were established by the Haitian MSPP in collaboration with CDC last fall following the earthquake, health officials were able to rapidly identify cholera. Jordan W. Tappero, MD, MPH, recalls how quickly the events unfolded after an Epidemic Intelligence Service (EIS) officer called him one evening in October 2010 to give him a heads up about reports received by the MSPP of watery diarrhea among patients in the Artibonite Department of Haiti.

“Within 30 minutes, two EIS officers were in a car with laboratory media (collected from the National Public Health Laboratory) needed to identify cholera. The two EIS offers went immediately to the facility that had reported patients with rice water diarrhea,” said Tappero, Director for CDC’s Health Systems Reconstruction Office. Rapid tests of the first 11 specimens were positive for Vibrio cholerae. “They brought the specimens to Haiti’s National Public Health Laboratory. Within 36 hours, colonies were growing in culture media, confirming cholera,” he said.

Forty-eight hours after that phone call from the EIS officer, CDC’s resident laboratory advisor Georges Dahourou, PharmD, MSc, working side by side with ministry laboratorians at Haiti’s National Public Health Laboratory, was able to confirm the cholera outbreak for public health officials. CDC Director Tom Frieden advised the Haitian MSPP to report the findings to the World Health Organization. It was the first cholera outbreak in Haiti in at least a century.

“Having a public health infrastructure and partnerships in place was critical after the earthquake hit the Port—au—Prince area,” said Brian Wheeler, MPH, Deputy Director for the CDC Haiti Office in Port—au—Prince.

Partnerships and infrastructure will be critical to Haiti’s long-term reconstruction efforts and success in managing many longstanding health problems — such as HIV/AIDS, malaria, TB, and malnutrition — as well as new challenges such as cholera.For more information on CDC’s role in strengthening health systems in Haiti, see https://www.cdc.gov/globalhealth/hsr. 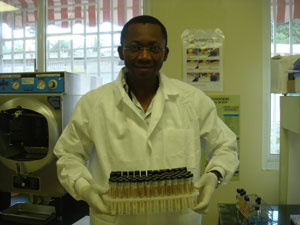 Photo credit: Nancy Strockbine, CDC
Georges Dahourou, PharmD, MS, Lab Advisor for CDC Haiti, carries the first 80 cholera isolates from Haiti′s National Public Health Laboratory. Working side by side with ministry laboratorians at the national laboratory, he was able to confirm the cholera outbreak for public health officials. It was Haiti′s first cholera outbreak in at least a century.

Haiti has the highest HIV prevalence rate in the Western Hemisphere (2.2%), with an estimated 120,000 persons living with HIV/AIDS. In 2002, the CDC Global AIDS Program (GAP) opened CDC′s first office in Haiti to assist the country in addressing the HIV/AIDS epidemic. In 2003, GAP resources were increased in Haiti under the President′s Emergency Plan for AIDS Relief (PEPFAR).

Less than 2 weeks after the quake hit, Haiti′s public health officials had launched a national surveillance system with assistance from CDC, PAHO, and other partners.