Rates of New Diagnosed Cases of Type 1 and Type 2 Diabetes Continue to Rise Among Children, Teens

The rate of new cases (or incidence) of diabetes in youths younger than 20 years increased in the United States between 2002 and 2015, with a 4.8% increase per year for type 2 diabetes and a 1.9% increase per year for type 1 diabetes, researchers reported in the February 14, 2020, issue of CDC’s Morbidity and Mortality Weekly Report. The rate of increase varied among racial/ethnic minority groups with type 1 diabetes but not type 2.

Data for this report were analyzed from the SEARCH for Diabetes in Youth Study (SEARCH), a population-based registry of diabetes in youths from five sites in the United States. SEARCH monitors how many US children and adolescents are affected by diabetes, how many are newly diagnosed, and whether diabetes is increasing over time. SEARCH is the first and only ongoing assessment of trends in type 1 and type 2 diabetes in US youths.

Between 2002 and 2015, the incidence of type 1 diabetes increased in all age, sex, and race/ethnicity groups, except for those younger than 5 years and American Indians primarily from one southwestern tribe. The steeper increases in incidence of type 1 diabetes were seen among non-Hispanic blacks (2.7% per year), Hispanics (4.0% per year), and Asians/Pacific Islanders (4.4% per year) while the increase among non-Hispanic whites was much lower (0.7% per year).

For type 2 diabetes, incidence during the period increased in all age, sex, and race/ethnicity groups, with the exception of non-Hispanic whites. The steepest increase was seen among Asians/Pacific Islanders (7.7% per year) followed by Hispanics (6.5% per year), non-Hispanic blacks (6.0% per year), and American Indians primarily from one southwestern tribe (3.7% per year). 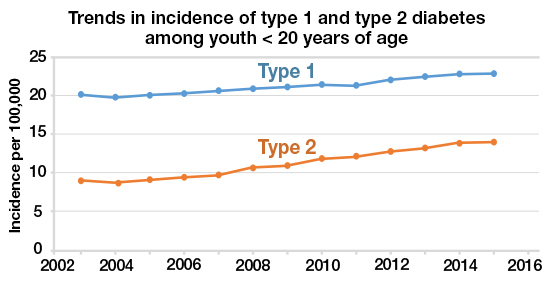 Youth-onset diabetes is associated with various complications such as kidney disease, eye disease, and nerve damage, and poses a substantial clinical and public health burden.

Learn more about resources to promote healthy eating and physical activity in youths.