By the Numbers: Diabetes in America 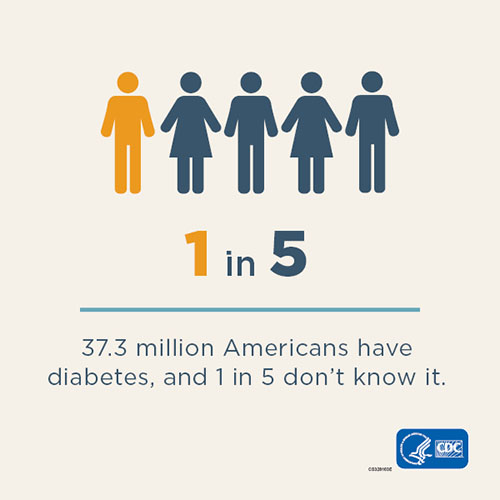 From 2001 to 2020, diabetes prevalence significantly increased among US adults 18 or older.

By Race and Ethnicity

Certain racial and ethnic groups are at a higher risk of developing diabetes than other groups.

Percentage of US Adults 18 or Older With Diagnosed Diabetes, by Race and Ethnicity, 2018–2019

Data sources: 2018–2019 National Health Interview Survey, except the American Indian and Alaska Native data, which are from the Indian Health Service National Data Warehouse (2019 data only).

Percentage of US Adults 18 or Older With Diagnosed Diabetes, by Education Level, 2018–2019

Adults with a family income below the federal poverty level (FPL) have the highest prevalence of diabetes.

Among Youth by Diabetes Type

Type 1 diabetes is most often diagnosed in children, teens, and young adults. Rates differ by racial and ethnic group.

Type 2 diabetes usually develops later in a person’s life. However, in recent decades, type 2 diabetes has increased among US children and adolescents aged 10 to 19. Rates differ by racial and ethnic group.

Trends in Incidence of Type 1 and Type 2 Diabetes in Children and Adolescents, Overall and by Race and Ethnicity, 2002–2015