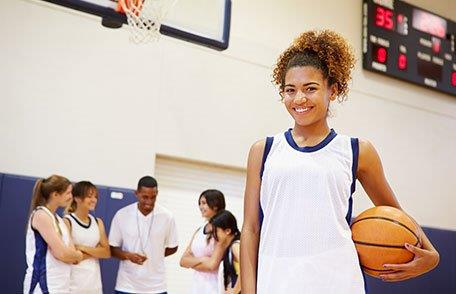 There’s a growing type 2 diabetes problem in our young people. But parents can help turn the tide with healthy changes that are good for the whole family.

Until recently, young children and teens almost never got type 2 diabetes, which is why it used to be called adult-onset diabetes. Now, about one-third of American youth are overweight, a problem closely related to the increase in kids with type 2 diabetes, some as young as 10 years old.

People who are overweight—especially if they have excess belly fat—are more likely to have insulin resistance, kids included. Insulin resistance is a major risk factor for type 2 diabetes.

Insulin is a hormone made by the pancreas that acts like a key to let blood sugar into cells for use as energy. Because of heredity (traits inherited from family members) or lifestyle (eating too much and moving too little), cells can stop responding normally to insulin. That causes the pancreas to make more insulin to try to get cells to respond and take in blood sugar.

As long as enough insulin is produced, blood sugar levels remain normal. This can go on for several years, but eventually the pancreas can’t keep up. Blood sugar starts to rise, first after meals and then all the time. Now the stage is set for type 2 diabetes.

Insulin resistance usually doesn’t have any symptoms, though some kids develop patches of thickened, dark, velvety skin called acanthosis nigricans, usually in body creases and folds such as the back of the neck or armpits. They may also have other conditions related to insulin resistance, including:

Being physically active lowers the risk for type 2 diabetes because it helps the body use insulin better, decreasing insulin resistance. Physical activity improves health in lots of other ways, too, from controlling blood pressure to boosting mental health.

Kids who get type 2 diabetes are usually diagnosed in their early teens. One reason is that hormones present during puberty make it harder for the body use insulin, especially for girls, who are more likely than boys to develop type 2 diabetes. That’s an important reason to help your kids take charge of their health while they’re young.

If your child is overweight and has any two of the risk factors listed above, talk to your doctor about getting his or her blood sugar tested. Testing typically begins at 10 years old or when puberty starts, whichever is first, and is repeated every 3 years.

Parents can do a lot to help their kids prevent type 2 diabetes. Set a new normal as a family—healthy changes become habits more easily when everyone does them together. Here are some tips to get started:

A recent study showed that when the amount of TV kids watched was limited, they lost weight—but not because they were more active when they weren’t watching. The difference was snacking: kids ate more when they were watching TV than when doing other activities, even sedentary (not physically active) ones. 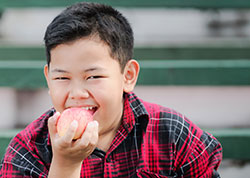 Encourage your kids to reach for fruit, the original fast food.

Young kids and teens are still growing, so if they’re overweight the goal is to slow down weight gain while allowing normal growth and development. Don’t put them on a weight loss diet without talking to their doctor.