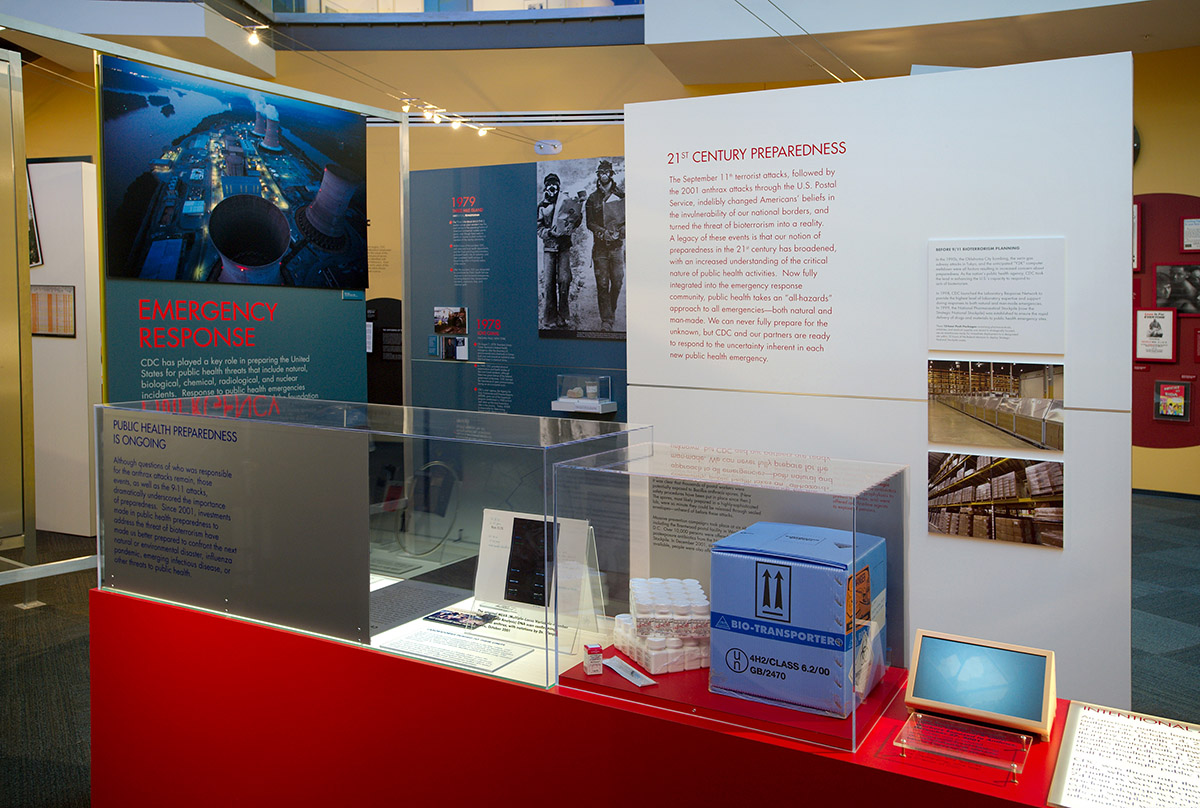 This section of The Story of CDC exhibit addresses emergency response. CDC has played a key role in preparing the United States for public health threats that include natural, biological, chemical, radiological, and nuclear incidents. Response to public health emergencies in the late 1970s and early 1980s laid the foundation for the agency’s preparedness activities and programs today. How we manage both natural and man-made risks before, during, and after emergencies is part of contemporary society, and is a critical component of CDC’s public health mission. The exhibit shows three examples of CDC’s emergency response work. 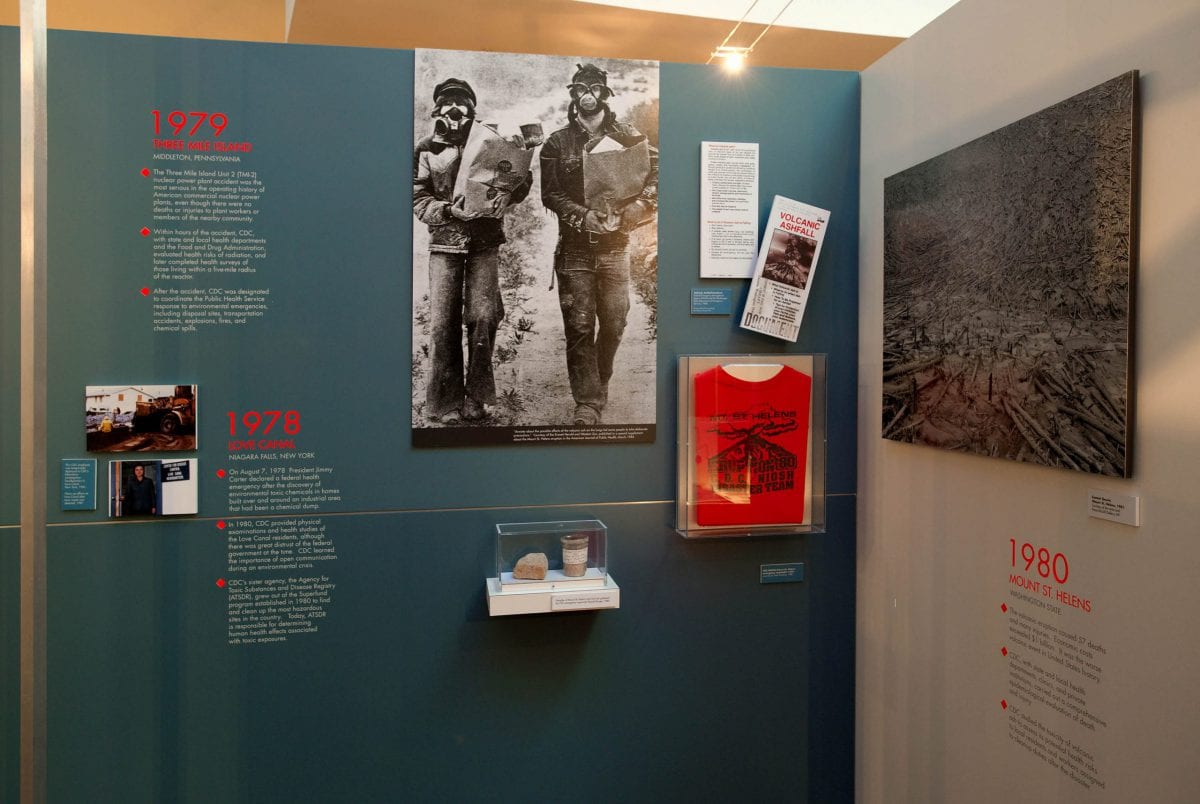 In August of 1978, then-President Jimmy Carter declared a federal health emergency after the discovery of environmental toxic chemicals in homes built over and around an industrial area that had been a chemical dump. CDC provided physical examinations and health studies of the Love Canal residents, although there was great distrust of the federal government at the time. CDC learned the importance of open communication during an environmental crisis. CDC’s sister agency, the Agency for Toxic Substances and Disease Registry (ATSDR), grew out of the Superfund program established in 1980 to find and clean up the most hazardous sites in the country. Today, ATSDR is responsible for determining human health effects associated with toxic exposures.

In 1979, a nuclear power plant accident occurred at the Three Mile Island Unit 2 in Middleton, Pennsylvania. Within hours of the accident, CDC, with state and local health departments and the Food and Drug Administration, evaluated health risks of radiation, and later completed health surveys of those living within a five-mile radius of the reactor. After the accident, CDC was designated to coordinate the Public Health Service response to environmental emergencies, including disposal sites, transportation accidents, explosions, fires, and chemical spills.

There was also the 1980 eruption of Mount St. Helens in Washington state. The volcano’s eruption was the worse volcanic event in United States history, causing 57 deaths and many injuries. CDC, with state and local health departments, clinics, and private institutions, carried out a comprehensive epidemiological evaluation of death and injury. CDC also studied the toxicity of volcanic ash to assess its potential health risks to residents and workers assigned to cleanup duties after the disaster. CDC continues to be ready to assist in responses to natural disasters. 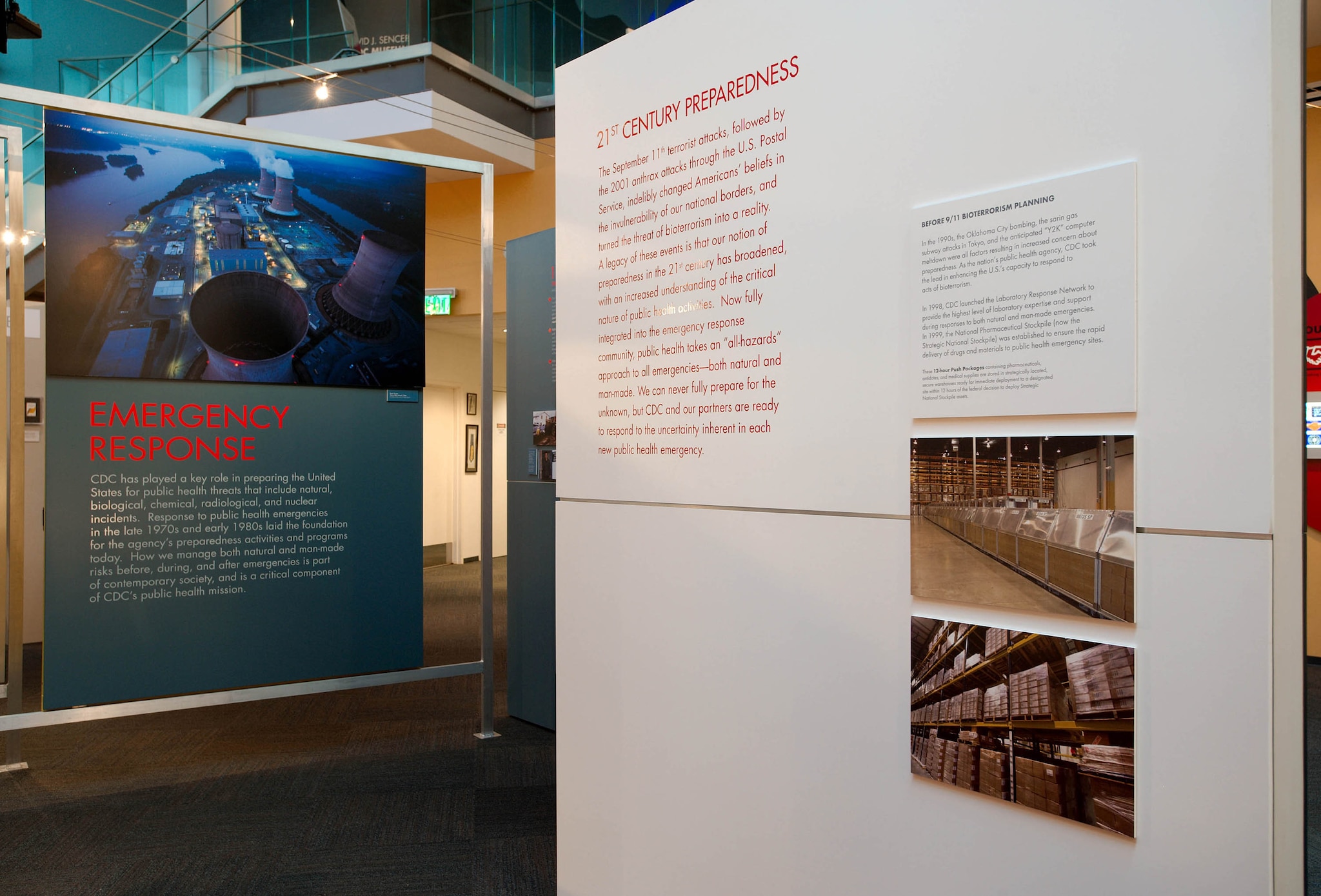 In the 1990s, the Oklahoma City bombing, the sarin gas subway attacks in Tokyo, and the anticipated “Y2K” computer meltdown were all factors leading to increased concern about U.S. preparedness. As the nation’s federal public health agency, CDC took the lead to enhance the U.S. capacity to respond to acts of bioterrorism.

In 1998, CDC launched the Laboratory Response Network to provide the highest level of laboratory expertise and support during responses to both natural and man-made emergencies. In 1999, the National Pharmaceutical Stockpile (now the Strategic National Stockpileexternal icon) was established to ensure the rapid delivery of drugs and materials to public health emergency sites.

There are two photographs of the 12-hour Push Packages in the Strategic National Stockpile. These are pharmaceuticals, antidotes and medical supplies stored in secure warehouses around the country. They can be sent to any emergency site within 12 hours of the decision to send them. 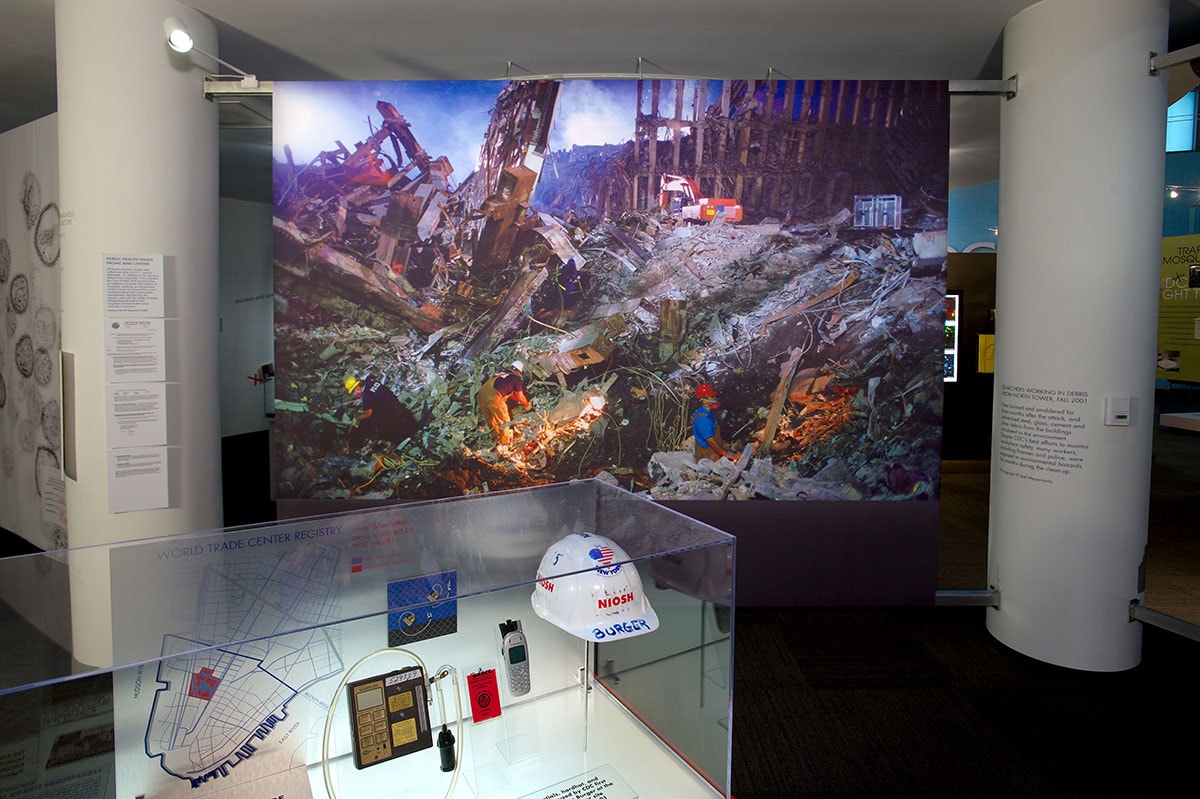 CDC’s intense preparedness efforts were tested on September 11, 2001, when two commercial airplanes were intentionally crashed into the World Trade Center towers, destroying them and the surrounding areas of lower Manhattan. The New York City Department of Health immediately began to assess the public health and medical impact of the attacks. In response to these events and the related attack on the Pentagon, the Federal Response Plan was activated. Within hours, the first CDC emergency responders were en route to New York City, and CDC delivered a shipment of medical supplies—the first emergency mobilization of the National Pharmaceutical Stockpile.

The September 11th terrorist attacks exposed tens of thousands of rescue, recovery, and clean-up workers to unprecedented levels of risk for job-related injury, illness, and death. In the days following the attacks, rescue workers, volunteers, and others from across the country descended on Ground Zero to search for potential survivors, and then clean-up and restore the site. CDC quickly sent dozens of staff who applied their technical expertise to help meet worker protection needs throughout the ten-month ordeal of rescue, recovery, and sifting and removing rubble. A big part of their job was to monitor personal protection equipment (PPE) such as respirators, and air quality.

In addition to responders and workers, survivors of the collapsed or damaged buildings, school children, and residents of the area were also exposed to smoke, dust, and airborne contaminants from the WTC site—200,000 people are estimated to have had high exposure. In 2002, CDC worked with the New York City Health Department to design the voluntary World Trade Center Registry. The Registry is tracking the physical and mental health status of a large group of highly exposed persons for up to 20 years through regular health surveys, in-depth studies, and matching cancer registries and vital records. Nearly 50,000 people are enrolled. Among the findings are that post-traumatic stress symptoms and new asthma are major health effects of the WTC attacks. 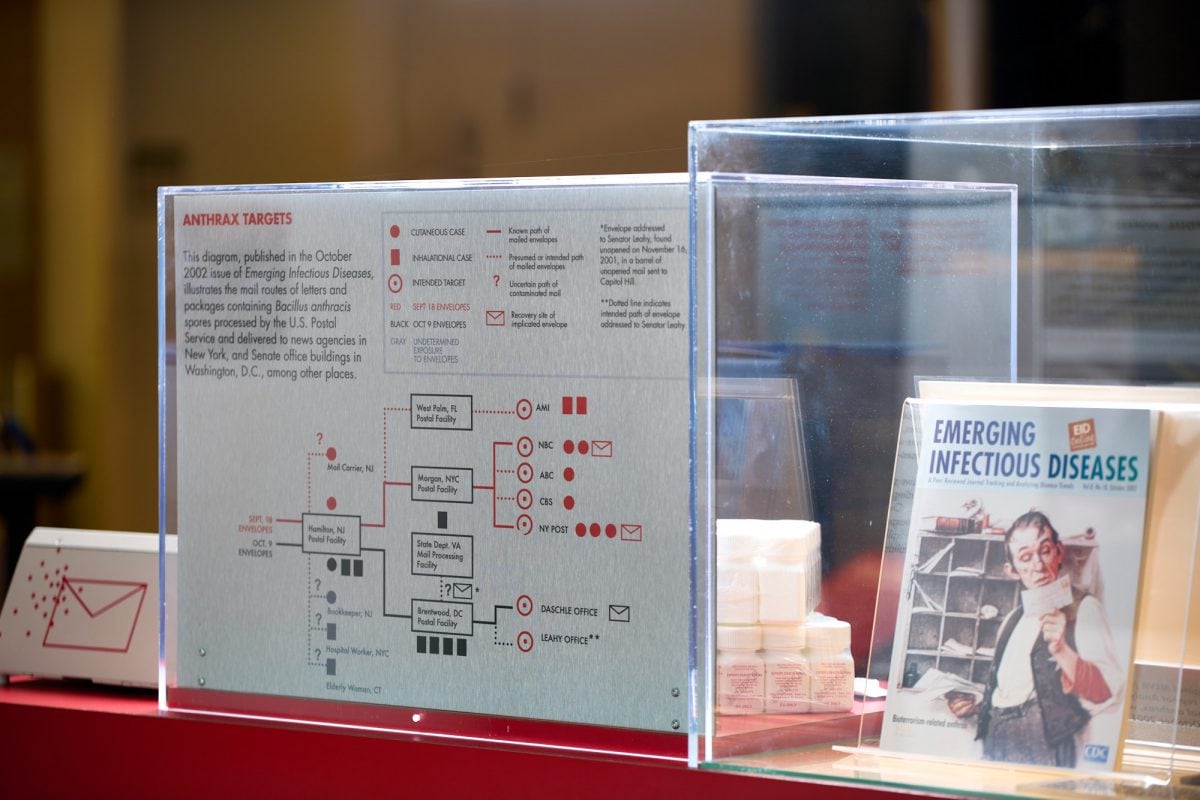 On display is a diagram from the October 2002 issue of Emerging Infectious Diseases. The diagram illustrates the mail routes of letters and packages containing Bacillus anthracis spores processed by the U.S. Postal Service and delivered to news agencies in New York and Senate office buildings in Washington, D.C., among other places. Also on display is an envelope addressed to Senator Leahy, found unopened on November 16, 2001, in a barrel of unopened mail sent to Capitol Hill. 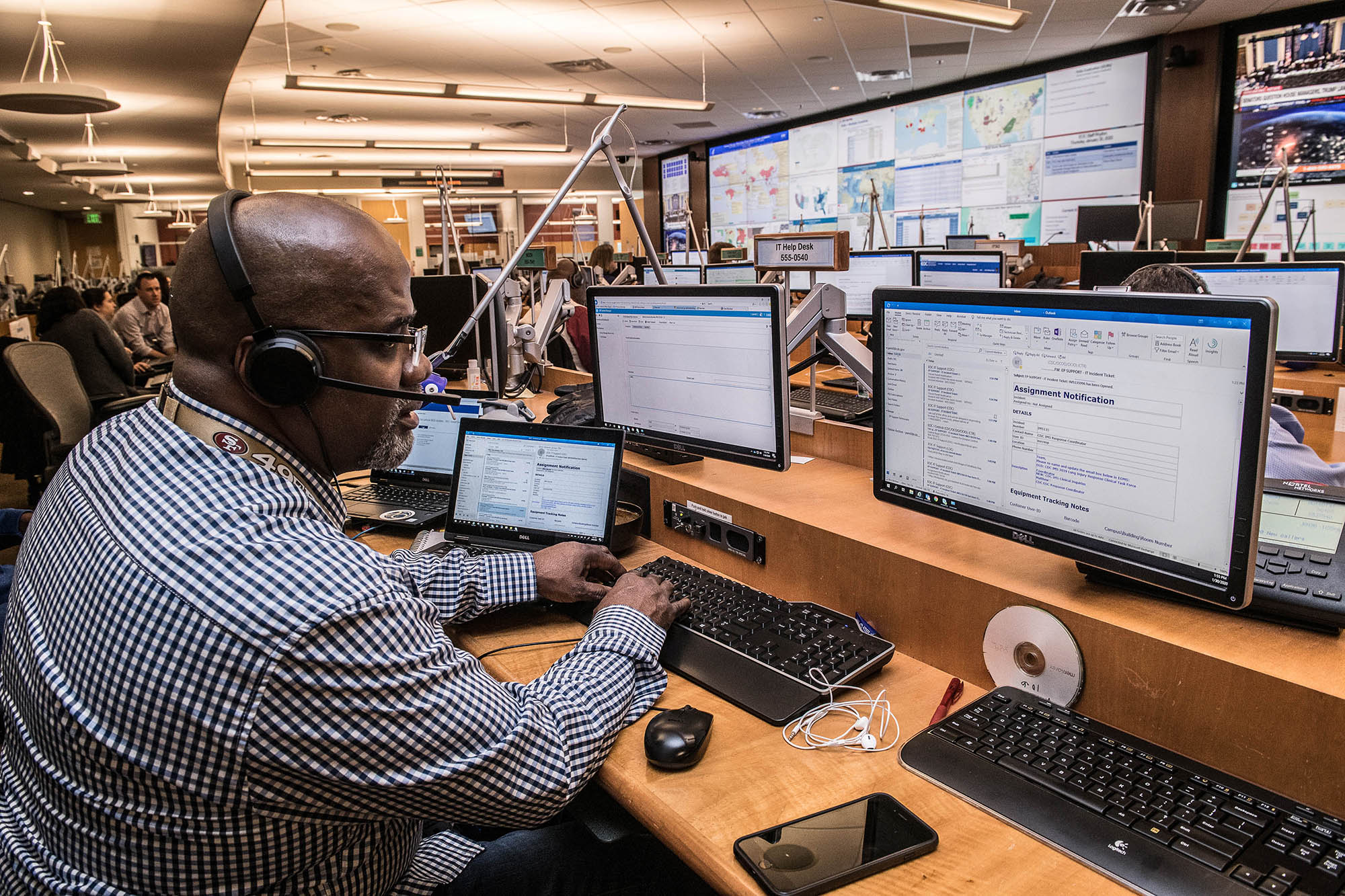 The use of CDC’s old auditorium as a center of operations during the anthrax investigations highlighted the need for a state-of-the-art permanent emergency operation center (EOC).  CDC’s first EOC, serving as a central control and coordination hub for epidemic outbreaks and other public health emergencies, opened in 2003 with the support of private donors. In 2005, a new, larger EOC was opened in CDC’s new headquarters building, where responses to emergencies from Hurricane Katrina to the H1N1 pandemic have been coordinated. The image above features the EOC activated in response to COVID-19 in early 2020.