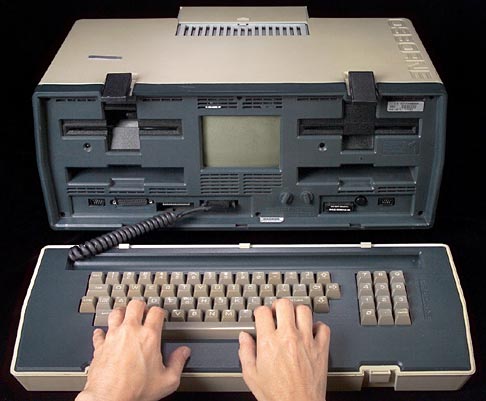 Osborne 1 in the CDCM collection

Remember your first laptop? It probably weighed less than 24.5 pounds, the weight of this substantial Osborne 1. While the first successful luggable computer was used at CDC beginning in 1982, this 64K RAM model was considered to be the first truly portable computer. It has an optional battery pack, and connections for a printer and a modem. The monochromatic screen is a massive 5 inches diagonal in size, and displays no more than 50 characters per line of text. To compensate, you could scroll the screen display back and forth with the cursor keys to show lines of text up to 128 characters wide.

To the left and right of the screen are two floppy disk drives used for storing files. The two pockets beneath the floppy drives are handy floppy disk storage or could be used for the Osborne modem. While the Osborne 1 was a good deal at $1,795, it was also the first computer to be sold with bundled software packages.

Designed with transportation in mind, it had to be rugged and able to survive being jostled about. That is one reason the screen is so small – a larger screen would be more susceptible to damage. This self-contained unit was considered to be airline carry-on luggage as it was the size of a suitcase and would fit under the passenger seat of any commercial airliner.

To some Epidemic Intelligence Service (EIS) officers, this computer was a dream come true. It meant they didn’t have to wait for analysis from the monstrous mainframes of the time. The “luggables” gave the disease detectives answers in the field before they returned to Atlanta, changing epidemic investigation practices forever.