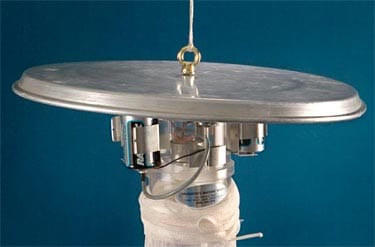 Is it an invasion from outer space? That’s what local police in Ecuador thought when they first saw this light trap in 1969, during a Venezuelan encephalitis (VE) epidemic. There is a long history of light trap use in measuring the effectiveness of mosquito control in populated areas. The standard for years was the New Jersey light trap, developed in 1932, but its weight of 15 lbs. and dependence on a 110-volt battery limited its usefulness in the wild. Researchers conducting arbovirus studies in remote areas needed a reliable, portable trap to effectively capture a variety of live mosquitoes.

Dr. W. Daniel Sudia joined the CDC Virus Vector Laboratory located in Montgomery, Alabama, in 1954. As he tells the story (in the September 14, 1981 edition of Current Contents), “Roy Chamberlain suddenly realized this need after he slipped on a trestle and bruised his rib while carrying out of the Manchac Swamp in Louisiana two 35-lb. lead-acid car batteries used to operate the New Jersey light traps. During a discussion of basic trap requirements with Chamberlain, I suggested a totally new design of a motor mount, lid assembly and collection bag. One person could carry a dozen of the 1-pound traps and easily repair them in the field. In 1960, our laboratory moved to Atlanta where we had access to the equipment development shop. Robert Osgood, James Moore, Charles Smith and James Weaver assisted in further refining the trap and produced the great number we needed for field studies. Verne Newhouse and other of our staff reported on the use of dry ice as a supplement to the light trap; mosquito catches increased by four to ten-fold and variety of species increased as well.” 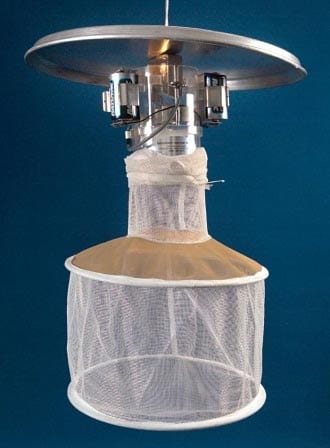 “The virus field research conducted by CDC entomologists generated many scientific reports on Eastern, Western, St. Louis, California, and Venezuelan encephalitis. A Florida Everglades study resulted in the discovery of Everglades-VE, Mahogany Hammock, Gumbo Limbo, Shark River, and Pahayokee viruses, all new to science. In California, we used 40 CDC light traps to collect mosquitoes for arbovirus studies over a 400-mile stretch of the central valley; this study was aided by the conversion to flashlight-battery operation of the trap by J. Gibson Johnston, Jr., of our staff. The traps served particularly well during the VE epidemic. When VE reached Texas and Northern Mexico in 1971, about 215,000 mosquitoes were collected; they yielded nearly 1,000 virus isolates. These findings permitted positive definition for the epidemic vectors of VE in the U.S. Without the CDC light trap, these highly mobile studies could not have been done.”

In 1972, Dr. Sudia was awarded the USPHS Meritorious Service Medal for developing and applying standard methods for large-scale investigation of arbovirus outbreaks in the US; the CDC light trap played a vital part in those investigations.