“Antigens” are molecular structures on the surface of viruses that are recognized by the immune system and are capable of triggering one kind of immune response known as antibody production. Two proteins (hemagglutinin and neuraminidase) on the surface of influenza viruses contain the major antigens targeted by antibodies (see Figure 1).

When someone is exposed to an influenza virus (either through infection or vaccination) their immune system makes specific antibodies against the antigens (surface proteins) on that particular influenza virus. The term “antigenic properties” is used to describe the antibody or immune response triggered by the antigens on a particular virus. “Antigenic characterization” refers to the analysis of a virus’ antigenic properties to help assess how related it is to another virus.

CDC antigenically characterizes about 2,000 influenza viruses during a typical flu season to monitor for changes in circulating viruses and to compare how similar these viruses are to those included in vaccines. Antigenic characterization can give an indication of the flu vaccine’s ability to produce an immune response against the influenza viruses circulating in people. This information also helps experts decide what viruses should be included in the upcoming season’s influenza vaccine. 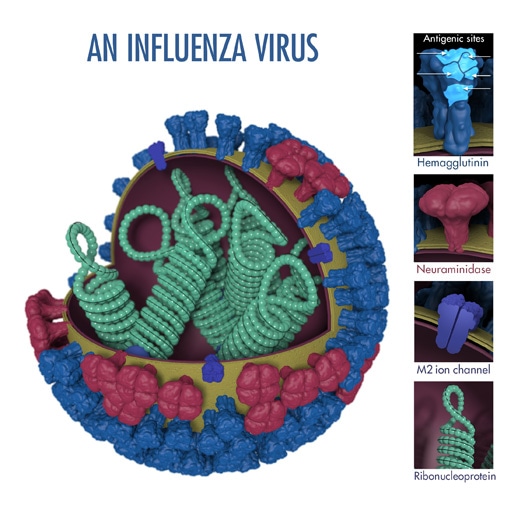 The HI test involves three main components: antibodies, influenza virus, and red blood cells that are mixed together in the wells (i.e., cups) of a microtiter plate. (See Image 1.) 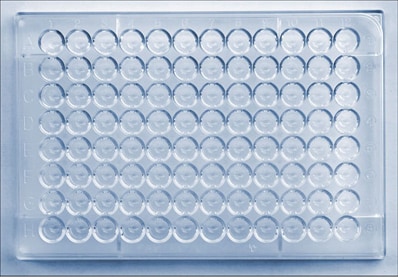 A microtiter plate is used to perform the HI test. The plate contains wells (i.e., cup-like depressions that can hold a small amount of liquid) where the solution of antibodies, influenza virus and red blood cells are inserted and allowed to interact. These wells are arranged according to rows and columns (which are identified on the microtiter plate by letters and numbers, respectively). The rows of the plate can be used to test different influenza viruses against the same set of antibodies. The columns can be used to differentiate between greater dilutions of antibodies, like a scale from low to high going from left to right (see Figures 3 and 4 for an example).

The antibodies used in the HI test are obtained by infecting an animal (usually a ferret) that is immunologically naïve (i.e., it has not been exposed to any influenza virus or vaccine previously in its lifetime). The animal’s immune system creates antibodies in response to the antigens on the surface of the specific flu virus that was used to infect that animal. To study these antibodies, a sample of blood is drawn from the animal, from which serum is obtained. The HI test measures how well these antibodies recognize and bind to other influenza viruses (such as, influenza viruses isolated from flu patients). If the ferret antibodies that resulted from exposure to the vaccine virus recognize and bind well to the influenza virus from a sick patient, this indicates that the vaccine virus is antigenically similar to the influenza virus obtained from the sick patient. This finding has implications for how well the vaccine might work in people. See Flu Vaccine Effectiveness: Questions and Answers for Health Professionals for more information.

For the HI test, red blood cells (RBCs) are taken from animals (usually turkeys or guinea pigs). They are used in the HI test because influenza viruses bind to them. Normally, RBCs in a solution will sink to the bottom of the assay well and form a red dot at the bottom (Figure 2A). However, when an influenza virus is added to the RBC solution, the virus’ hemagglutinin (HA) surface proteins will bind to multiple RBCs. When influenza viruses bind to the RBCs, the red cells form a lattice structure (Figure 2B). This keeps the RBCs suspended in solution instead of sinking to the bottom and forming the red dot. The process of the influenza virus binding to RBCs to form the lattice structure is called “hemagglutination.”

Figure 2. Components of the HI Assay 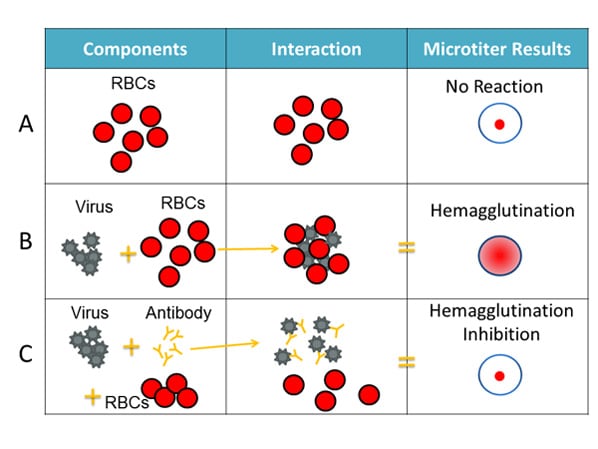 The HI test involves the interaction of red blood cells (RBCs), antibody and influenza virus. Row A shows that in the absence of virus, RBCs in a solution will sink to the bottom of a microtiter plate well and look like a red dot. Row B shows that influenza viruses will bind to RBCs when placed in the same solution. This is called hemagglutination and is represented by the formation of the lattice structure, depicted in the far-right column under “Microtiter Results.” Row C shows that the antibody binds well to the virus and prevents the virus from gluing RBCs together and forming a lattice structure, therefore, hemagglutination does not occur (i.e., hemagglutination inhibition occurs instead).

When a circulating influenza virus is antigenically different from a vaccine, the antibodies developed in response to the vaccine virus may not recognize and bind this virus. In the HI test, this will cause hemagglutination to occur (see Figure 2B). Circulating influenza viruses tested via the HI test are typically obtained from respiratory samples collected from sick patients.

The HI test assesses the degree of antigenic similarity between two viruses using a scale based on antibody dilution. As previously mentioned, the HI test is performed using a microtiter plate. The microtiter plate contains rows and columns of wells (i.e., cups) where RBCs, influenza virus and antibodies (developed against a comparison virus, such as a vaccine virus) are mixed. Dilutions are marked across the top of the microtiter plate. These dilutions function as a scale for assessing antigenic similarity and immune response. By testing the ability of greater dilutions of antibody to prevent hemagglutination, scientists measure how well those antibodies recognize and bind to an influenza virus. The higher the dilution, the fewer antibodies are needed to block hemagglutination and the more antigenically similar the two viruses being compared are to each other. The highest dilution of antibody that results in hemagglutination inhibition of the test virus is considered an HI titer (Figure 3).

This virus has an HI titer of 1280, which means that the greatest dilution of antibody that still blocked hemagglutination from occurring was at 1280 dilution. At this dilution, the antibodies were still capable of recognizing and binding to the antigens on the virus.

When CDC antigenically characterizes influenza viruses to inform decisions on the formulation of the seasonal flu vaccine, the HI test is used to compare currently circulating viruses (rows B and C) with vaccine viruses (row A). This allows scientists to quickly determine if a virus used in the seasonal flu vaccine is antigenically similar to circulating influenza viruses and therefore capable of producing an immune response against them.

Does not work with recent Flu A(H3N2) viruses

An important limitation of the HI test is that the majority of circulating influenza A(H3N2) viruses do not bind to RBCs, and therefore, cannot be tested using the HI test. As a result, CDC has developed a different virus neutralization assay called the “high-content imaging-based neutralization test” (HINT) to measure how circulating A(H3N2) flu viruses are evolving to evade human immunity. More information about HINT is available in a CDC spotlight article.

Right now, most flu vaccines are made using viruses grown in chicken eggs. As human influenza viruses adapt to grow in eggs, genetic changes can occur in the viruses. These are called “egg-adapted” changes. Some egg-adapted changes may change the virus’ antigenic (or immunogenic) properties while others may not. Egg-adapted changes have become a particular problem for selection of candidate vaccine viruses (CVVs) for the influenza A(H3N2) virus component of flu vaccine made using egg-based production technology. Influenza A(H3N2) viruses tend to grow less well in chicken eggs than other influenza viruses (e.g. A(H1N1)pdm09), and they also are more prone to egg-adapted changes. Such changes can reduce the immune protection provided by the flu vaccine against circulating A(H3N2) viruses.

Time from Vaccine Virus Selection to Delivery of Vaccine

Using current egg-based vaccine production technology, it takes about six months from the time that a vaccine virus is chosen (i.e., February for the Northern Hemisphere flu vaccine) to the time when influenza vaccines become widely available. Because influenza viruses are constantly changing, circulating influenza viruses may change during this six month period. If these genetic changes cause antigenic changes, it could mean that antibodies created through vaccination may not recognize and inactivate circulating influenza viruses. New technologies that shorten the manufacturing time could reduce the chances of significant antigenic changes occurring in circulating viruses before influenza vaccines become available each year: for example, cell-based and recombinant flu vaccines.

Use of the HI test to assess the similarity of circulating influenza viruses to vaccine viruses involves obtaining antibodies from animals (particularly ferrets). Ferrets are often used as an animal model for influenza infection because they can be easily infected with human influenza viruses and experience similar signs and symptoms (e.g., fever, sneezing, loss of appetite, etc.). Prior to infection, ferret serum is pre-screened to determine that it does not contain antibodies to circulating influenza viruses. When ferrets are infected with a live influenza virus, they typically produce strong antibody responses against that particular virus.  Therefore, ferret antisera are commonly used to detect antigenic differences between influenza viruses. However, there are differences between the immune responses of ferrets and humans which need to be considered when assessing the antigenic properties of influenza viruses. More information on use of human sera is available at human serology and flu.