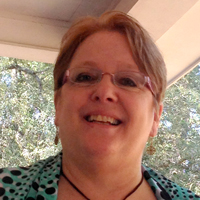 “Listen to your body—it does tell you things.” There is a lot of cancer in my family. My dad and uncle both had it twice. My first cousin is having a second bout of throat cancer. Three cousins had breast cancer, and my aunt had uterine cancer. So because of my family history, I was watching for something.

In the summer of 1997, I had the worst pain of my life, in my stomach. I thought it was appendicitis. I was on my way to the emergency room when it passed, so I didn’t go. At the end of that summer, I moved from Fort Lauderdale, FL, to northern Florida for a new teaching job. I felt nauseous, but I thought it was just the stress of changing jobs. Then my periods went from being just one day to three. I had always been regular, like clockwork.

I remember I was going on a date and had been feeling crampy all day. I was supposed to see the doctor the following week; I was just waiting for my new insurance to kick in. On my date, I started bleeding – really bleeding. My date worked in emergency response, so he was very calm and took me home. When the bleeding wouldn’t stop, he took me to the emergency room. Fortunately, it turned out that the doctor I was supposed to see the following week was there at the hospital delivering a baby, so he was able to help me and get the bleeding stopped. I went to see him the next week. He did a D and C. (Editor’s note: D and C is a procedure to scrape and collect tissue from inside the uterus. Dilation [“D”] is a widening of the cervix to allow instruments into the uterus. Curettage [“C”] is the scraping of the walls of the uterus.) It turned out that I had uterine cancer. So my doctor sent me to an oncologist.

The oncologist decided to operate first, and then later decide whether to proceed with chemo or radiation. We found out it was a very rare kind of uterine cancer, called clear cell sarcoma. (Editor’s note: this type of cancer forms in the muscle of the uterus and usually occurs after menopause. Cancers that form in the lining of the uterine wall, called adenocarcinomas, are the most common type of uterine cancer.)

After the surgery, the doctor told me that he knew he didn’t get it all and I would need more treatment. I went back to work teaching. For the first 30 days, I drove about 70 miles each day to go to school, and radiation, and then back. I learned to write down all my questions in a notebook and take that with me—and to take someone else with me to hear it. I learned to write things down so I’d remember them.

Then, in April of 1999, I had a cold and was losing weight. I was running—I had just done a 5k two weeks before – so I was supposed to be losing weight. But I also had some swelling in my lymph nodes. So I had a CT. (Editor’s note: a CT scan also called a CAT scan, it takes detailed pictures of areas inside the body from different angles, using a computer linked to an X-ray machine.) The CT showed there were two spots on my lungs—the cancer had recurred. I had chemo, and more surgery, to take out the bottom right lobe of my lung.

Since then, I’ve been cancer-free. It’s been 17 years since my uterine cancer diagnosis and 15 since the recurrence in my lung. I would tell other women, “Listen to your body—it does tell you things. Don’t pooh pooh something. It’s really just about listening to your body. It’s about knowing yourself.” Once you know, you can fight it.