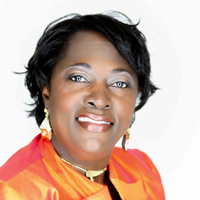 “I want people to know that there is hope—healing is available—there is life after cancer.”

In January 2010, my husband and I had just returned from our vacation. It has been an annual retreat for us that prepares us for the New Year. We had no idea that our lives were about to take a turn and we would need that extra support—time would become pre- and post-cancer.

Not long after, I found myself standing in my bathroom looking in my mirror, when I felt something was different in my lower right abdomen. I asked my husband to feel it—he did not feel anything. I thought I was imagining things. I thought, maybe it’s a muscle, given that I had started to work out. A week or so later, while lying on my bed I again felt what seemed to be a hard mass in my lower right abdomen. Again, I asked my husband if he felt it—again he could not. I decided to go to my gynecologist. It was there that I was greeted with the news no woman ever wants to hear—she suspected that I had ovarian cancer.

The next few months were a blur. In March 2012, I underwent a surgery where both my ovaries and both fallopian tubes were removed. Then the pathology report confirmed that I had cancer—dysgerminoma, a kind of ovarian cancer typically affecting women in their 20s.

I’ll never forget that day when my doctor came in to tell me that I had cancer. But she said, “We can beat this.” Similarly, I’ll never forget what my husband said when I was diagnosed, “Come on, you’re going to be alright, we’ve fought bigger devils than this.” Although I didn’t think that we had, I did not cancel out his faith-filled words. These words and so many other faith-filled words of family and friends would be the hope that I needed in the weeks to come.

At the end of March, I began four three-week cycles of chemotherapy. This was a frightening time. I can remember many days and nights confessing that God had not given me the spirit of fear, but of love, power, and a sound mind. I am a high-energy person and it was difficult not to have energy to do the things that I was accustomed to doing. I’ll never forget the words of a close friend, “You’ll need to let others take care of you.” This offered me hope that there would be others to help me, just as I had given my help and support to others before. During treatment, I experienced such a flood of family and friends supporting me, especially in prayer.

Months later, I was forced to stop chemotherapy due to some complications. But, soon after that, an MRI showed I was cancer-free!

Today I am on the committee for a 5K race (Athena’s Run) in the Winston-Salem, North Carolina area. We celebrate those who survived, honor those who passed, and encourage those who are fighting against gynecological cancers. As a survivor, I have to be involved. I have been given the opportunity for life. I want to encourage all women to be sensitive to their bodies and sensitive to the voice of God. I have no doubt that it was God who promoted me to find the mass in my lower right abdomen. My life is changed forever. It is fuller, and I am even more assured of the healing power and presence of God.

When you hear the word “cancer,” there can be an immediate kind of depression that occurs that can take us to a place where there is no hope. I want people to know that there is hope—healing is available—there is life after cancer.

I want women to know their bodies, to really know what is right for them. Listen to your body. If there is something that doesn’t feel right, dig a little deeper. You know your body.

Stay strong. Stay connected to your faith, family, good friends, people who will support you and be there for you.