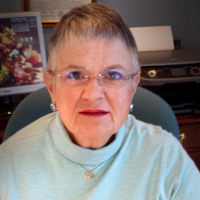 “Almost no one thought I would survive the initial cancer for six months, but here I am 31 years later.”

My husband and I married when we were in our 30s, and it took us a few years to decide whether we wanted children. Golf, sewing, reading, my Scottish terrier, and college sports occupied what free time I had. Because I was trying to get pregnant, I skipped my annual gynecological exam in May of 1983. I was certain I would be pregnant within a few months and would see the doctor then. Unfortunately, that was not what happened.

I had gained about five pounds and began walking several miles a day and exercising at the gym to try losing the weight, all to no avail. I attributed the occasional ache in my abdomen to the exercise routine. On the very last day of my teaching contract for the academic year, I developed a fever and chills. I drank lots of fluids, took two aspirins and went to bed early. I awoke the next morning with a slightly lower temperature and abdominal pain. Thinking I had appendicitis, I immediately contacted my family physician, who saw me that afternoon. He diagnosed the problem as an intestinal virus, recommended fluids and medication for the fever, and said I should be fine to leave for the vacation my husband and I had scheduled. I felt better as the week progressed and left for our vacation as planned.

During the vacation, I had occasional bouts of nausea and began having night sweats. Upon returning home, I called the doctor immediately. He did blood work and ordered an abdominal scan to evaluate my gallbladder for gallstones. The results of that scan altered my life forever. There was a very large mass that appeared to be coming from my left ovary.

I had exploratory surgery the following week. The mass turned out to be a tumor the size of a honeydew melon, and there was about a quart of fluid in the abdominal cavity. The doctor had to remove both ovaries, both Fallopian tubes, the uterus, and some of the omentum (Editor’s note: the omentum is a layer of tissue that covers and supports the intestines and organs in the lower abdominal area.) The fever I had was caused by an abscess on the abdominal wall where the tumor was creating pressure. The doctor told me the words no one wants to hear: “I couldn’t get it all.” The next blow was the discovery that this was a very rare type of ovarian tumor.

I was fortunate that a nurse colleague did her research and was able to recommend a wonderful gynecologic oncologist at our local medical center. My case was reviewed by the hospital’s tumor board prior to my seeing the gynecologic oncologist, and he was ready with the protocol as soon as he had examined me. He saw me three weeks later, admitted me to the hospital immediately and began a chemotherapy program. Because many of today’s anti-nausea medicines didn’t exist in 1983, I simply had to suffer through days of unrelenting nausea and treatments that required hospitalization. At the end of nine months of treatment, a “second look” surgery confirmed that the chemotherapy had mostly worked. In 1986—three and a half years after my initial diagnosis—I had surgery to remove cysts that developed as a result of the original cancer, but checkups ever since have been negative.

Almost no one thought I would survive the initial cancer for six months, but here I am 31 years later.

I was fortunate to have a loving and supportive husband, family, colleagues, as well as a boss who was supportive of my working when I was able. Friends brought food, ran errands, and essentially tried to keep me occupied and involved in everyday life so that cancer and its treatment did not consume every waking moment. I will be eternally grateful for the many cards, letters, and telephone calls I received and the prayers that were lifted for my benefit.

There have been other challenges since I was treated for ovarian cancer. In 2005, I had ductal carcinoma in situ (DCIS) of the left breast and underwent a lumpectomy and radiation. (Editor’s note: DCIS is a very early breast cancer in which there are abnormal cells in the lining of a milk duct in the breast. It is considered non-invasive, meaning that it has not spread to other parts of the breast.)

And in 2011, I had a skin cancer on my nose that required a skin graft. I don’t know what the future holds, but I know that I’ll just keep living my life, trusting in my faith, and no matter what happens, I will never allow myself to feel like a victim.

I learned many valuable life lessons throughout that year of treatment for ovarian cancer. I now do the things I enjoy and want to do, not those things that other people think I should do. I value time with my husband—the ironing will always wait—but the day will come when we may not be able to do things together. I take the time to send birthday cards, get well cards, and personal notes because I realize what a powerful message of love and caring they convey. Most importantly, I try to live each day without worrying about the things I have no control over. If I don’t take care of me, I won’t have the ability to care for others very well.