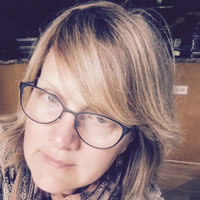 “Cancer has changed my entire life and how I appreciate and look at everything around me.”

I live in Minnesota with my husband, son, and dog, and we love doing all sorts of activities outdoors. I am blessed to have my sister and dad live within an hour’s drive. My mom, who I was very, very close to, passed away in February of 2012. That summer, I was diagnosed with cervical cancer.

Nothing cued me in that I had cancer. I have always gone for routine annual exams and Pap tests, so I went in and it was business as usual. The next day my phone rang and it was the doctor—you could hear in her voice that something was wrong. She asked if I ever had an abnormal Pap before. I hadn’t. She said, “Well, this one was very abnormal”—which is never something you want to hear.

I had originally gone to my general practitioner, so now my doctor referred me to an obstetrician (OB) who could see me the next day and would perform a colposcopy. [Editor’s note: During colposcopy, the doctor uses an instrument to magnify the cervix to see any abnormal cells. Often the doctor takes a small sample of tissue (biopsy) to be checked for cancer and other abnormalities.] I was nervous. The OB reassured me that it was probably nothing serious.

When the colposcopy was complete, they sent out my biopsy and told me I would hear the results in a few days. I was traveling for work when I got the phone call: it was cervical cancer. Before I even had time to process the diagnosis, they gave me the name of the oncologist I would see.

Everything happened very quickly. I learned I had cancer on June 20, and by July 23rd, I had a radical hysterectomy. This treatment was recommended based on the kind of cancer it was, my age, and the fact that I already had a 7-year-old child. I didn’t care what had to be done, I wanted it out. I did not get a second opinion; I trusted my doctor. To this day I would do it all again, exactly the same way.

They got everything with the surgery, so I did not have radiation treatments. I get checked every six months for follow-up care. Before being diagnosed with cancer, I had normal periods, no abnormal bleeding or pain. I was told that usually a Pap test wouldn’t pick up the kind of cervical cancer that I had. My doctor says it was a miracle that they even found it.

Only after everything was over did I start asking “How?”and “Why?” My cancer was caused by HPV. [Editor’s note: Human papillomavirus (HPV) is the main cause of cervical cancer. HPV is a common virus that is passed from one person to another during sex. At least half of sexually active people will have HPV at some point in their lives, but few women will get cervical cancer.]

Cancer is one of those things that no one chooses to get. And while I’m not glad that I got it, it has changed my entire life and how I appreciate and look at everything around me. I am now so aware of anything in the gynecologic area. If I’m bloated, if I’m bleeding—I’m so acutely aware of it. And I know my body. It’s important to be able to talk to someone about what’s happening.

My message to other women is one that you may have heard before, but it will always stand true: Get your Pap test. For the five minutes of discomfort, it’s worth it. Because if I hadn’t, I would not be here now.