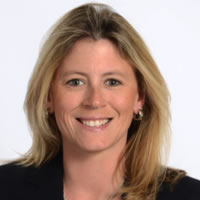 “Do not let fear, embarrassment, or shame prevent you from finding the help you need. You are not alone!”

I am a busy wife, mother of three, and college professor. When I’m not shuttling my kids to soccer and gymnastics, you can usually find me curled up reading a book, hiking in the woods with my Labradors, or kayaking the rivers and lakes of North Carolina. I grew up in an Air Force family, so the frequent moving around instilled a love of travel. I try to travel and explore as much as our pocketbooks will allow.

When I was 38, I began noticing spotting after intercourse. That wasn’t normal for me, and due to a prior hysterectomy, I no longer menstruated. At first, it was just a small amount, but became more noticeable after a few weeks. Eventually, I was spotting heavily throughout the day and needed sanitary pads.

Other than unusual bleeding, I didn’t experience any other symptoms, had no pain, and was otherwise completely healthy. However, the bleeding was getting worse and was so out of the ordinary that it terrified me. I knew something was wrong, and tried to get to the doctor as soon as possible.

I made an appointment with a gynecological oncologist for a colposcopy and exam. Unfortunately, I had to wait several weeks to get on the schedule. When the doctor started my exam, I noticed that it was taking longer than usual. She told me, “Well, I sure am glad you’re here today. You have a mass about the size of an egg that is causing your bleeding.” To say that shocked me is an understatement. From my previous experience, I thought I just had more dysplasia or a cyst. I never expected I would have a tumor, let alone one that large.

They scheduled me for a biopsy so they could collect and test the cells. While I waited for the biopsy results, I was living in limbo. I knew something was wrong, but had no clear answer as to what it was. In the back of my mind, I deeply worried it could be cancer. So when my doctor called to tell me that it was indeed cancer, I felt a mix of relief for having an answer, terror at my diagnosis, and resolution that now I had something to work with and move on. I will never forget that phone call for the rest of my life.

More tests followed. The cancer was localized, but had just started to impact my lymph nodes. Thankfully, it had not impacted other pelvic organs. The final diagnosis was stage 2B vaginal cancer. I started treatment, which included 25 external radiation sessions, six weekly chemotherapy infusions, and interstitial brachytherapy requiring a six-day stay in the hospital. (Editor’s note: During interstitial brachytherapy, devices containing radioactive material are inserted directly into body tissue.) My tumor was too large to remove surgically without damaging other pelvic organs, so the treatment was designed to shrink it and kill the surrounding cells to prevent further growth.

The treatment was intense and came with severe side effects. I lost my appetite, had terrible gastrointestinal symptoms, and was exhausted. I became severely anemic. Over the course of two months, I lost 20 pounds and all my strength. I’m so thankful to my husband and mom for picking up where I left off and managing the house so I could focus on getting well. I cannot imagine going through what I did without their support.

My last PET scan was three months after treatment ended and came back NED—no evidence of disease. Those were the some of the sweetest words I’d ever heard and such a beautiful moment to share with my husband. I go back every few months now for checkups, and will be followed closely for several years.

While I have fear of recurrence and anxiety leading up to my checkups, for the most part I am healthy and active again, and very thankful for it. Cancer has a way of helping you “zoom in” on your priorities. I tend to focus more on time with family and friends, having fun and finding joy, and having as much adventure as possible.

I also feel a strong responsibility to help advocate for and educate others. My disease was caused by a virus, HPV, which is preventable. The HPV vaccine wasn’t available for me, but it is available now. We have the power to eradicate HPV-associated cancers in a single generation with current technology. It is my mission to help spread the word so that others can make healthier decisions. Talking about my disease and HPV can be awkward and uncomfortable, but if it helps others, I consider it a success.

My message to other women is this: ask your doctor about Pap and HPV tests. Screenings are important to catch any problems early, when they are more treatable. Do not let fear, embarrassment, or shame prevent you from finding the help you need. You are not alone!