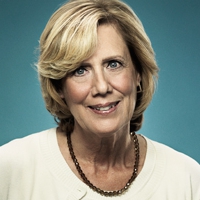 “The women in my family have a history of being healthy and living a long, long time. I was the last person I thought who would ever have to worry about a major health crisis.”

The women in my family have a history of being healthy and living a long, long time. I was the last person I thought who would ever have to worry about a major health crisis. I have a beautiful family—two sons, three stepdaughters, four grandchildren, and a supportive husband. I have always been active and enjoy outdoor sports and activities, and I guess you would say I’m a workaholic.

Before I was diagnosed with ovarian cancer, I rarely got sick. Then, a few years ago, I had some symptoms that were unusual for me—I felt bloated and gained weight for no reason I could explain. I also noticed other things that were unusual for me, like constipation, and I felt nauseous when I ate. My doctors told me I had hypothyroidism, put me on medication, and the symptoms went away temporarily. I’m still not sure if the hypothyroidism symptoms were related to what came next.

It was about a year later when the symptoms returned. And there was something new—I saw just one single spot of blood on my panti-liner. I was 57 and menopausal. I made an appointment to see my OB/GYN, something I had been religious about doing. The spot of blood reminded me it was time for a checkup.

Because of the spot of blood, my OB/GYN recommended an ultrasound and biopsy. I think the ultrasound may have saved my life because when the results were inconclusive, my OB/GYN referred me to a gynecologic oncologist, a doctor specially trained to diagnose and treat women who have cancers of the reproductive organs. The gynecologic oncologist performed laparoscopic surgery to find out whether a tumor they had discovered was cancerous. Well, I did have cancer, and I ended up having a full hysterectomy rather than just the planned laparoscopic surgery.

I was shocked and devastated to learn I had cancer and that I would need additional therapy. But about three weeks later, I began a chemotherapy regimen of six sessions, each three weeks apart. I couldn’t help thinking, “What happened to the life I was enjoying just three weeks ago?”

After an emotional roller coaster that lasted for about a year following my surgery, I now feel more like my old self. And I’ve come to accept that while some things in life are in my control; some are not. Because of what I went through, I would like to tell other women to pay attention to their bodies. Don’t get too wrapped up in your “phase of life”—like having menopause—and if you have troubling symptoms, don’t dismiss them.