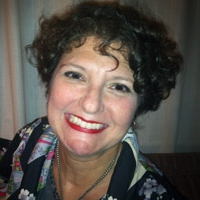 “I was extremely fortunate I caught this cancer early. Had I put it off and waited, the outcome could have been completely different.” I am 53 years young, married, and the fourth child of 13. My oldest sister and my mother are my best friends. And I have the best cat ever—Pierre. Overall, I have always been pretty healthy—I try to eat right and exercise. I like yoga, ballet, writing, reading, and cooking.

In the spring of 2013, I kept seeing a commercial for the Inside Knowledge campaign and kept thinking about it—‘I have those symptoms—spotting after menopause, a bloated feeling, having to go to the bathroom a lot, and this pressure/pain that was not like the cramps and pain I used to get with my period.’

One day in August of 2013, I just got sick of it, so I called my gynecologist, and she wanted to see me as soon as possible. She didn’t like the sound of my symptoms at all. She scheduled lots of tests. It was all a bit confusing because I felt fabulous and healthy.

The tests showed I was postmenopausal, my Pap was normal, and an ultrasound suggested my uterine walls were thicker than normal, which could have been caused by many things, such as endometriosis (a condition where tissue from the lining of the uterus grows elsewhere in the body), hyperplasia (a sign of abnormal or precancerous cell changes), or a gynecologic cancer, such as uterine cancer. I didn’t like hearing the “C” word…Who does?

The next step was a D and C and hysteroscopy. (Editor’s note: D and C is a procedure to scrape and collect tissue from inside the uterus. Dilation [“D”] is a widening of the cervix to allow instruments into the uterus. Curettage [“C”] is the scraping of the walls of the uterus. Hysteroscopy allows a doctor to look inside the uterus). Both procedures were scheduled for late September. I was very positive that my doctor would only find small non-cancerous fibroids and that after the D and C, they would be gone. I NEVER imagined her calling to tell me, “Your biopsy came back cancerous.”

After a second opinion confirmed it was cancer, the ball just started rolling. They moved quickly and with a real sense of urgency. My gynecologist referred me to a gynecologic oncologist. The day after my appointment with that doctor, I had a complete hysterectomy to remove my cervix, fallopian tubes, and ovaries.

A week after my surgery, the pathology report confirmed I had stage 1, grade 1 cancer localized to the uterus only, which meant I was cancer-free. No chemotherapy, radiation, or additional treatment was needed. We were so happy and relieved, we cried.

I was extremely fortunate I caught this cancer early. Had I put it off and waited, the outcome could have been completely different. From initial visit to receiving final pathology was about 10 weeks—10 long, draining, and stressful weeks. After the initial shock of being told I had cancer, I noticed a change in my attitude. I looked at life differently…perhaps more appreciatively, and I stopped getting annoyed at what I call little things.

I am very lucky and so grateful I saw the Inside Knowledge commercial and took action when I did. Those commercials saved my life.

Women, if you have symptoms, listen to your body, don’t be afraid. Make the call. The sooner the better.