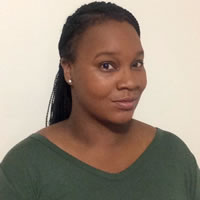 “You know your body better than anyone. If there are any changes, get it checked out.”

I am a captain in the United States Air Force and have been married to my high school sweetheart for 5 years. I am the happy pet parent to an Australian Shepherd and a Collie. My husband and I live in Montana, and I enjoy running, skiing, and reading in my free time.

In September 2015, I was completing Squadron Officer School (SOS) when I noticed a lump on my vulva one day when getting out of the shower. I didn’t pay much attention to it at first because I thought maybe I had pulled something during training. I was in great physical health, having just accomplished a Commanders Challenge, and besides the lump, I had no other symptoms.

After I graduated SOS, I noticed the lump on my vulva was still there, it was growing, and it was uncomfortable when I wore jeans. It was at this point that I decided to get it looked at by my doctor.

I was diagnosed in November 2015 with a Bartholin’s cyst and was scheduled to have a quick outpatient procedure to drain it. (Editor’s note: The Bartholin’s [BAHR-toe-linz] glands are located on each side of the vaginal opening. These glands secrete fluid that helps lubricate the vagina. Sometimes the openings of these glands become obstructed, causing fluid to back up into the gland. The result is relatively painless swelling called a Bartholin’s cyst.) However, when the doctors cut into the cyst, no liquid came out, and instead they found a solid mass. They decided to biopsy the tissue, and I feared the results would come back indicating I had cancer. A few days later, the biopsy results showed I had a ruptured polyp—no cancer!

Because the mass was about 6 cm, we decided to do outpatient surgery and send it to pathology. I had my surgery on February 2, 2016, and two weeks later I had a follow-up appointment to ensure I was healing properly. I had been skiing since the surgery and was looking forward to an upcoming vacation to the Caribbean. I was hoping to get good news, so I could go swimming. My doctor told me I was healing well, but that he wanted to talk about my pathology results. I was not worried because I had already been told it wasn’t cancer.

As it turned out, my margins tested positive for sarcoma of the vulva and I was referred to a specialist. (Editor’s note: Soft tissue sarcoma is a cancer that starts in soft tissues of the body, including muscle, tendons, fat, lymph vessels, blood vessels, nerves, and tissue around joints.) Less than a month later, I had a radical, partial vulvectomy. Part of my vulva was removed as well as some tissue around it. Luckily the cancer had not spread. Since the surgery, I have received good results during medical checkups.

I am still learning to deal with my vulvar cancer diagnosis every day. Not a day has gone by that I have not thought about what happened or researched it more to see if there’s any new information about it. While all women are at risk for vulvar cancer, very few will get it. I have had a hard time dealing with the why and how did it happen to me. Besides being a woman, I did not have any of the factors generally associated with a higher risk for vulvar cancer, nor have I ever had an abnormal Pap test.

Since my diagnosis, I have shared my story with others and have tried to advocate as much as possible to bring awareness to this cancer. I was lucky. I was able to return to work and strengthen my relationships with those closest to me. I will always have that fear this cancer could come back or that I get a different type of cancer, but I am living in the here and now.

When I tell my story, my message to other women is that you know your body better than anyone. If there are any changes that you cannot possibly connect the dots to how or why something happened, get it checked out. I am a strong believer that early diagnosis saved my life.