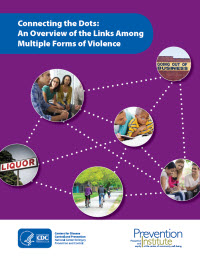 Understanding the overlapping causes of violence and the things that can protect people and communities can help us better prevent violence in all its forms. Connecting the Dots: An Overview of the Links Among Multiple Forms of Violence [3 MB, 16 Pages] shares research on the connections between different forms of violence and describes how these connections affect communities. This publication remains a critical foundation for how we approach our violence prevention work.

Why use a cross-cutting approach?

To learn more about how different types of violence are connected and hear how communities are using this approach to prevent violence, visit Connecting the Dots on DVP’s VetoViolence website.

To explore connections between different types of violence and their shared risk and protective factors visit the Connections Selector on DVP’s VetoViolence website.