Brett lives in New Mexico and started smoking menthol cigarettes at age 16 to impress a girl. He kept it up for 30 years, smoking about a pack of cigarettes a day. By his mid-30s, Brett had gum disease—a danger for all people who smoke. Because of his gum disease, the tissues and bones holding Brett’s teeth in place were breaking down. During each visit, his dentist asked, “Are you still smoking?”

By age 42, Brett had lost most of his teeth, including 16 during one surgery. With his mouth still swollen, Brett continued to smoke. “There I would be, standing outside having a cigarette,” he said. “I was still completely addicted and in denial.”

Brett has now been smokefree for 4 years. “Life is so much better without smoking,” he says. “You’re not constantly thinking about your next cigarette.”

Brett P.’s Tip Ad
Low Resolution Video
Brett started smoking cigarettes at age 16. By his mid-30s, Brett had gum disease—a danger for all people who smoke. By age 42, he had lost most of his teeth, including 16 during one surgery. In this TV ad, Brett says that your smile says a lot about you, and smoking can take that smile away.
Brett P.’s Story
Low Resolution Video
Brett started smoking when he was 16 to impress a girl. By his mid-thirties, he had gum disease and the tissues and bones holding his teeth in place were breaking down. In this video, Brett talks about his addiction. Even right after surgery to pull out 16 teeth, Brett was still smoking.
Brett P.: Tooth Loss Isn’t Pretty
Low Resolution Video
Brett smoked cigarettes and lost all of his front teeth—top and bottom—by the time he was 42. He had gum disease, which is a risk for people who smoke. In this video, Brett talks about trying to hide his tooth loss, even from his wife.
Felicita R. and Brett P.’s Ad
Low Resolution Video
Felicita started smoking at age 12 and Brett at age 16. Neither of them knew that smoking could harm their gums and teeth. In this bilingual TV ad, Brett and Felicita advise people not to smoke if they want to keep their teeth and their smiles.
On This Page
Free Quitting Resources
Web
Smartphone Apps/Text
Telephone
Free Quitting Resources
Web
Smartphone Apps/Text
Telephone

Brett lives in New Mexico and desperately wishes he had a better story about why he lost most of his teeth by age 42. The truth is that smoking cigarettes played a large part in ruining Brett’s natural smile. His mother was dentist, so he had good dental care as a child and saw a dentist regularly as an adult. 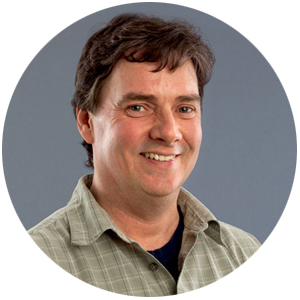 However, Brett started smoking menthol cigarettes at age 16 to impress a girl who worked as a waitress at a late-night diner. “I still remember smoking, but not the name of that waitress!” he said.

Brett switched to non-mentholated cigarettes and smoked about a pack a day. By his mid-30s, he had gum disease—a danger for all people who smoke. Because of his gum disease, the tissues and bones holding Brett’s teeth in place were breaking down. During each visit, his dentist asked, “Are you still smoking?”

Around age 40, Brett started losing teeth. Two years later, he learned that 16 more teeth needed to come out, including all of his front teeth—both top and bottom. After surgery, while his mouth and gums were still healing, Brett continued to smoke. “There I would be, standing outside having a cigarette. I was still completely addicted and in denial, even after I lost a bunch of teeth,” he said.

It took a while to learn how to talk correctly with partial dentures—and talking was Brett’s business as a radio personality. “It’s almost like having a really big wad of gum in your mouth, except it’s hard. And it’s plastic. And it’s not supposed to be there.”

Brett smoked cigarettes for more than 30 years. After trying to quit smoking several times, he finally quit for good with the help of nicotine patches. He now knows that he can’t smoke even one puff of a cigarette, or else he could relapse. “Life is so much better without smoking,” Brett says. “You’re not constantly thinking about your next cigarette.”

Since his surgery, it’s been hard for Brett to accept the way he looks, with only 12 real teeth left. Brett puts his false teeth in first thing in the morning—and he takes them out in the dark, just before going to bed. He doesn’t want his wife to see the empty spaces in his mouth where he used to have teeth.

Brett hopes that sharing his story will convince people who smoke to quit as soon as possible. “My wake-up call was losing most of my teeth,” he says. 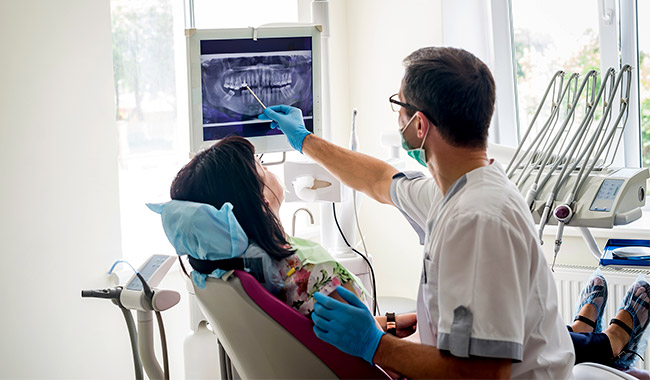 Gum (Periodontal) Disease
Get the Facts 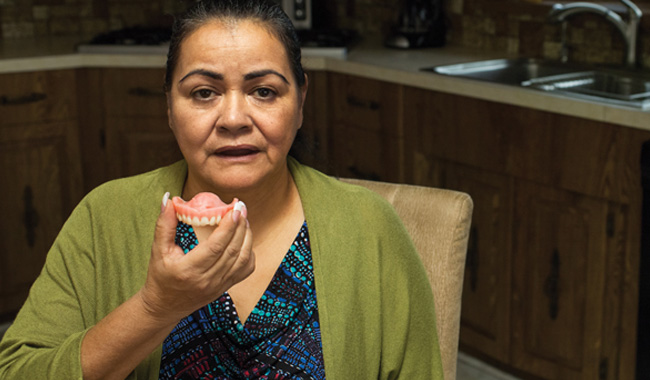