In late 2020, an otherwise healthy woman in her 40s returned home to Tennessee after a mission trip to a sub-Saharan African country. Following three days of fever, chills, sweats, and headache, she went to a local emergency room and was tested for COVID-19 and malaria. Her condition rapidly worsened. 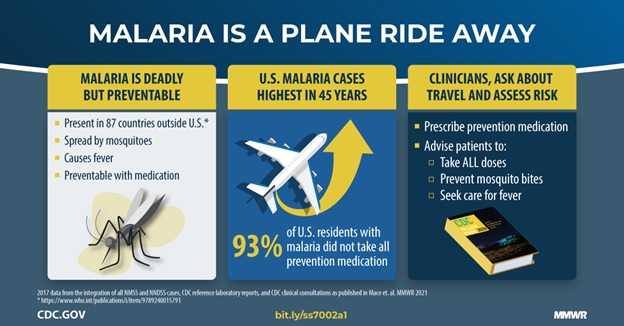 When her blood test came back positive for malaria six days later, her doctors contacted CDC’s expert 24-hour malaria hotline for guidance on treatment. After that call, her care team arranged for her to be air-lifted to another facility where she could start an urgent course of antimalarial medicines. Sadly, it was too late; she died a few days later.

Each year on April 25, CDC joins the global community to recognize World Malaria Day because malaria remains a leading cause of preventable illness and death around the world. Malaria was eliminated from the United States 70 years ago yet still infects 2,000 Americans each year.

Preventing, tracking, and treating malaria in the United States

CDC has a decades-long history fighting malaria. In fact, eliminating malaria was CDC’s founding purpose when it started in 1942 as the agency for Malaria Control in War Areas, designed to keep the southeastern states malaria-free during World War II. By the early 1950s, malaria was eliminated from the United States.

The devastating case of the woman from Tennessee is a reminder that our work is not done. Crucially, drawing the line against malaria also requires holding the line in the United States to sustain progress. 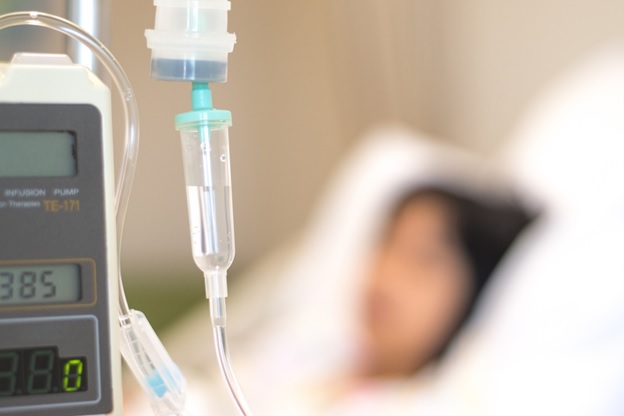 The number of malaria cases diagnosed domestically has been increasing since the mid-1970s corresponding to the increase in international travel, particularly to places with malaria. A new CDC publication shows that malaria cases in the United States rose to 2,161 in 2017, the highest number in 45 years. This is an unacceptably high number for a preventable and treatable disease.

For the last two years, in the absence of a commercially-available, FDA-approved antimalarial drug, CDC has delivered lifesaving injectable artesunate—the first line drug and global standard for treatment of severe malaria—to patients in need.

In May 2020, FDA approved artesunate for treatment of severe malaria in the United States. The commercial availability of Artesunate for Injection™ launched in March 2021external icon.

It may take some time between the commercial launch of Artesunate for Injection™ and adequate stocking in pharmacies and hospitals across the United States. In the meantime, CDC will continue releasing artesunate in situations where FDA-approved Artesunate for Injection™ is not available within 24 hours of a clinician requesting it. Once availability expands nationwide, CDC will discontinue its distribution.

Treatment is just one aspect of our domestic malaria strategy. We want to prevent travelers from getting malaria in the first place. CDC does this in three ways:

Reducing the burden of malaria around the world

Malaria kills more than 400,000 people around the world every year, mostly young children. However, with proven tools and methods such as insecticide-treated bed nets, better case management of malaria in children and pregnant women, expanded use of preventative medicine during high malaria transmission season, and insecticide resistance monitoring, these numbers should come way down.

With the massive scale-up of proven malaria prevention and treatment interventions, more than 7.5 million lives have been saved since 2000.

Over the last few decades, CDC and the global community have made progress in this fight. Fifteen years ago, malaria killed nearly 1.2 million people annually. Today, we have reduced that number by more than half.

CDC is an international leader in malaria research and innovation, providing scientific expertise to countries and partners to improve surveillance, lab systems, mosquito control, and management of cases. Our priorities include:

To read more about how CDC’s Division of Parasitic Diseases and Malaria fights malaria and other parasitic diseases in the United States and around the world, see the Division’s new Strategic Priorities 2021–2025pdf icon.

This month, CDC joins partners around the world in raising awareness about malaria.