Starting June 1, 2012, CDC began offering malaria species confirmation and malaria drug resistance testing services for cases of malaria diagnosed and treated in the United States. These tests will be provided free of charge. 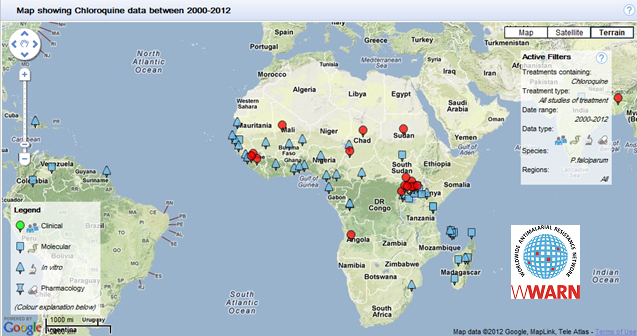 This map summarizes the available data from 2000 – 2012 describing chloroquine resistance in Africa. The map was generated by the WWARN Explorer, a product of the Worldwide Antimalarial Resistance Network, www.wwarn.orgexternal icon.

In many places throughout the world, the malaria parasite has become resistant to the antimalarial drugs used to treat cases of malaria illness. First, resistance to chloroquine began to appear. This pattern then repeated itself with sulfadoxine-pyrimethamine, and now in some places in the Mekong region in Asia, some malaria illnesses have not been cured by artemisinin-containing antimalarial drugs.

When resistance to a antimalarial drug reaches certain levels, the drug is no longer effective for prevention (in travelers) or treatment, and another must be used. Currently, only limited information is available about the emergence and spread of malaria drug resistance in many parts of the world.

To help address this gap, the CDC malaria and diagnostic laboratories will now offer expanded malaria testing services free of charge for all cases of malaria diagnosed in the United States—approximately 2,000 each year, virtually all of which were acquired in other countries. Services will include polymerase chain reaction (PCR)-confirmation of the species, identification of drug resistance mutations, and when possible, parasite culture for direct susceptibility testing.

CDC encourages all laboratories in the United States to make use of this service for all of the cases of malaria that they diagnose.

With information from drug resistance surveillance, CDC will be better able to formulate its prevention and treatment recommendations for those traveling from the United States to areas with malaria transmission.

Malaria is a notifiable disease, and reporting to state and local health departments is mandated. Please be sure that this case of malaria is reported according to state or local requirements at the time of diagnosis.

Drug resistance testing and parasite identification do not replace the initial diagnostic testing that must be performed immediately on site to diagnose a case of malaria. The gold standard for the diagnosis of malaria is microscopic visualization of Giemsa-stained parasites in a blood sample. The infecting species of malaria parasite is determined by the parasites’ morphological characteristics and the infected red blood cells. When microscopy services are not immediately available, an antigen detection test (also called rapid diagnostic test or RDT) may be used. Only after a diagnosis of malaria has been established should specimens be sent to CDC for assistance with determining the species or for drug resistance surveillance.

Likewise, treatment decisions and initiation of therapy should occur immediately after the malaria diagnosis is made based on the current treatment guidelinespdf icon. Clinicians should not wait for the results of the resistance testing to guide therapy. Resistance testing results will likely require several weeks to be completed.

Testing can be performed on multiple types of specimens including whole blood, dried blood spots on filter paper, as well as from fixed slides. Multiple types of specimens can be submitted if available, however the preferred specimen is whole blood (collected prior to receipt of antimalarial treatment medicines) in an EDTA blood tube. Specimens that arrive within 72 hours of collection are more likely to contain viable organisms for culture but older specimens can still be evaluated by PCR tests.

Specimens sent to CDC should be accompanied by the specimen submission form. Additional information can be found in the instructions for shipping specimens to CDC document.

Health-care providers are encouraged to use CDC resources for malaria diagnosis and management advice. These include a Malaria Hotline, which provides access to CDC malaria experts, web-based, continuously updated information for clinicians on diagnosis and treatment of malaria, and diagnostic assistance through DPDx.