Presumptive Treatment and Screening for Strongyloidiasis, Infections Caused by Other Soil-Transmitted Helminths, and Schistosomiasis among Newly Arrived Refugees

Strongyloides parasites, other soil-transmitted helminths (STH), and Schistosoma species are some of the most common infections among refugees [1, 2]. Among refugees resettled in North America, the prevalence of potentially pathogenic parasites ranges from 8% to 86% [1, 2]. This broad range may be explained by differences in geographic origin, age, previous living and environmental conditions, diet, occupational history, and education level. Although frequently asymptomatic or subclinical, some infections may cause significant morbidity and mortality. Parasites that infect humans represent a complex and broad category of organisms. This section of the guidelines will provide detailed information regarding the most commonly encountered parasitic infections.

A summary table of current recommendations is included in Table 1.  In addition, information on overseas pre-departure intervention programs can be accessed on the CDC Immigrant, Refugee, and Migrant Health website.

Below is a brief summary of salient points about Strongyloides infection in refugees, especially in context of the presumptive treatment with ivermectin. Detailed information about Strongyloides for healthcare providers can be found at the CDC Parasitic Diseases website.

*Several areas of Ethiopia currently have endemic Loa loa. However, resettling refugees are not from these areas. Ethiopian refugees are receiving presumptive treatment with ivermectin for Strongyloides infection.

‡ May be divided and given in two doses for better tolerance.

‖If Strongyloides, other STH, or schistosomiasis infection is identified in children below age or weight limitations, treatment should still be offered.

Contraindications to Presumptive Treatment with Albendazole, Ivermectin, and Praziquantel

*Cysticercosis (e.g., subcutaneous nodules) is a parasitic tissue infection caused by Taenia solium. Taenia brain cysts (neurocysticercosis) may cause seizures or other neurologic disorders. Presumptive treatment with albendazole and/or praziquantel is contraindicated in these cases, and expert consultation is strongly recommended.

The majority of resettling populations receive pre-departure albendazole, making stool testing or treatment for STH unnecessary for most refugees.

Nearly all refugees (regardless of country of origin) are at risk for Strongyloides and should be tested and treated with ivermectin, if not previously pretreated. However, refugees from areas of SSA endemic for Loa loa deserve special attention. These refugees should have serologic testing for Strongyloides parasites and if positive, high-burden Loa loa parasitemia should be ruled out before treatment is initiated. Ivermectin given in the setting of high-burden Loa loa infection may result in encephalopathy. Screening for high-burden Loa loa parasitemia may be achieved by collecting a daytime (10 a.m.–2 p.m.) thin and thick blood smear for Loa loa. If the thin and thick blood smear is negative, it is safe to treat the Strongyloides infection with ivermectin. If the daytime thin and thick blood smear is positive, contact CDC for further guidance regarding workup and management. Additional information on loiasis is available on the CDC Parasitic Diseases website.

There have been substantial challenges in providing the records of presumptive parasite treatment for individual refugees to US clinicians at the time of their post-arrival medical examination. Therefore, individual refugee presumptive treatment records are made available in electronic and hard copy formats, and general information is provided on the CDC Immigrant, Refugee, and Migrant Health website.

Resources and Summary Recommendations for Post-arrival Management of Strongyloidiasis, Other Soil-transmitted Helminths, and Schistosomiasis

Refugees in this category received all recommended overseas presumptive treatment for parasites before departure. These individuals require no further testing for these infections unless they have persistent eosinophilia or other signs or symptoms of infection 3 to 6 months after initial treatment (Figure 1). Persistent eosinophilia may indicate treatment failure or unidentified parasitic infection (Table 3), and follow-up is recommended (Figure 1). In these cases, please consult a tropical medicine specialist. 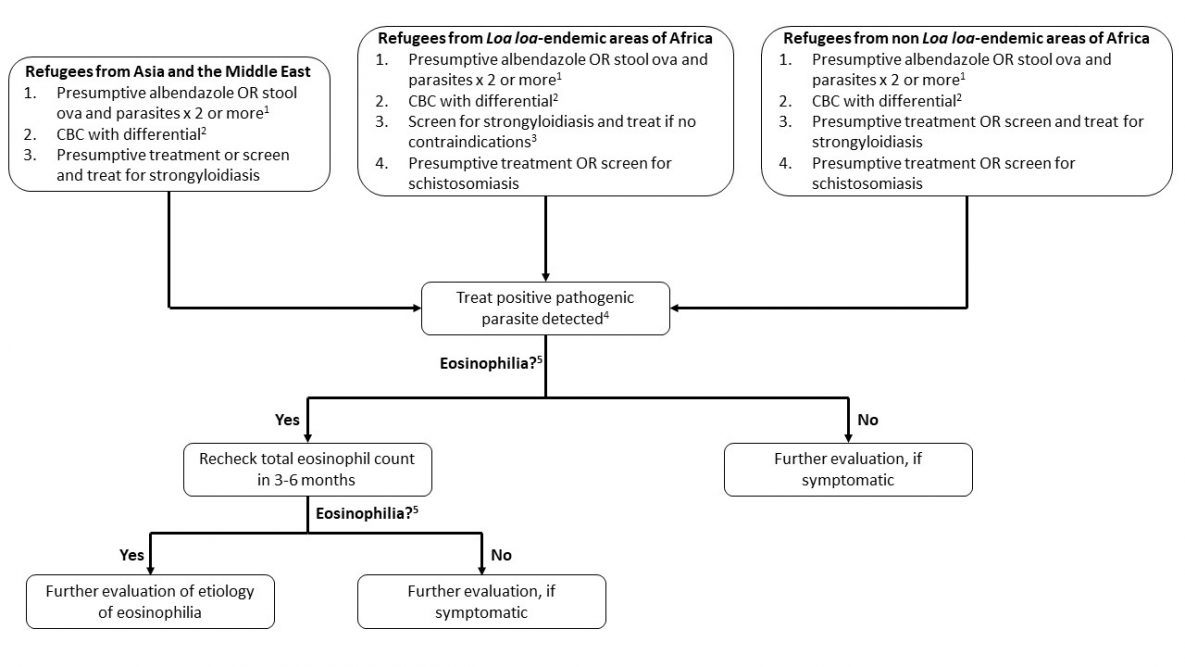 If the initial eosinophil count is normal, repeat testing for eosinophilia in an asymptomatic person is not indicated. If the initial absolute eosinophil count is 450 cells/μL or greater, clinical decision-making should be guided by the history of presumptive treatment. Although many parasites are associated with eosinophilia, others are not. In addition, eosinophilia may also be associated with noninfectious disorders, and the broader differential diagnosis should be kept in mind (Table 3). Persistent eosinophilia in a refugee is most likely due to parasitic infection, and the most commonly identified etiologies are failed treatments of strongyloidiasis, schistosomiasis, trichuriasis, and other commonly encountered parasites such as tapeworm (e.g., Hymenolepis nana, Taenia species [spp]). Persistent eosinophilia frequently requires expert consultation.

Parasitic and Non-parasitic Causes of Eosinophilia

* These parasites commonly cause eosinophilia, but stool examination alone is insufficient for diagnosis.  Special testing is frequently needed.

Other Parasitic Infections Common in Refugees

Many parasitic infections in refugees may be detected when stool exams are performed (Table 4). Some (pathogenic) require treatment, while others do not.

*The cysts of E. histolytica, E. dispar, and E. moshkovskii are morphologically identical by stool microscopy. When cysts are detected, stool antigen testing is recommended to distinguish the potentially pathogenic E. histolytica from the more common, nonpathogenic species.

Further information on these parasitic infections and assistance with diagnosis and treatment may be provided by the Centers for Disease Control and Prevention’s Division of Parasitic Diseases.