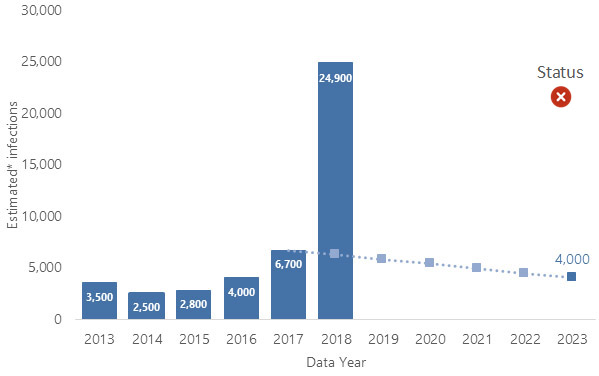 Source: CDC, National Notifiable Diseases Surveillance System
*The number of estimated viral hepatitis infections was determined by multiplying the number of reported cases by a factor that adjusted for under-ascertainment and under-reporting (1–2).

The number of estimated new hepatitis A virus (HAV) infections has increased since 2014 with a near 3-fold increase from 2017 to 2018 alone. As the number of infections in 2018 was estimated to be 24,900, the 2018 target of 6,250 was not met. The incidence of hepatitis A is subject to variation from year to year, in large part due to hepatitis A outbreaks. Since late 2016, there have been widespread outbreaks of hepatitis A across the United States, spread through person-to-person contact primarily among persons reporting drug use or homelessness.  Prior to that, in 2013, outbreaks occurred in several southwestern states and Hawaii among persons who consumed imported pomegranate seeds. In early 2016, two hepatitis A outbreaks occurred, both attributed to imported foods: one to frozen strawberries and one to raw scallops.

Numerator: Number of estimated HAV infections

Indicator Notes: (1) The NNDSS is a nationwide collaboration that enables all levels of public health to share notifiable-disease-related health information. Surveillance for viral hepatitis through NNDSS is based on case definitions developed and approved by the Council of State and Territorial Epidemiologists (CSTE) and CDC. Reported cases of acute viral hepatitis A are required to meet specific clinical and laboratory criteria. Estimated infections are based on laboratory-confirmed reports of acute viral hepatitis. Hepatitis A is reportable in all jurisdictions. Health-care providers, hospitals, and/or laboratories report cases to the local or state health department, and states voluntarily submit reports or notify CDC of newly diagnosed cases of hepatitis A that meet the surveillance case definition. To account for under-ascertainment and under-reporting, the number of reported cases is multiplied by 2.0. The methods for developing the multiplication factor are documented in Klevens, et al (2) with corrected multipliers developed by CDC (1).

Limitations: The number of estimated infections is based on a simple, probabilistic model for estimating the proportion of patients who were symptomatic, received testing, and were reported to health officials in each year (2). This constant multiplier may not account for variations over time in under-reporting and under-ascertainment due to public and provider awareness, changes in laboratory and diagnostic techniques, and changes in the definition of the condition.