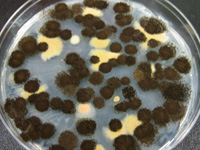 Another type of black mold, Aspergillus niger, is commonly found in homes.

There is always some mold everywhere – in the air and on many surfaces. Mold has been on the Earth for millions of years. Molds grow where there is moisture and they can flourish in damp, warm, and humid environments. Some people are sensitive to molds and can be prone to infections or allergic reactions depending upon their immune status. Individuals with asthma or those with weaker immune systems such as infants, elderly people, and those who are receiving immunosuppressive treatment (e.g., chemotherapy and bone marrow transplants) can be affected more by mold exposure. A link between other adverse health effects, such as pulmonary hemorrhage among infants, memory loss, or lethargy, and mold, including a black mold (e.g. Stachybotrys chartarum (S. chartarum)) which has been associated with heavy and constant water damage in buildings, has not been proven.

Although visible mold is easier to clean, hidden mold (e.g., mold behind walls and inside furnishings) can be hard to clean if you cannot find it. A simple method was needed for detecting hidden mold. Previously, the detection of mold such as S. chartarum relied on cultivation methods which were time and labor-intensive or needed to be performed in specialized laboratories. CDC scientists Drs. Detlef Schmechel and Daniel Lewis developed a rapid technique for detecting mold. They created monoclonal antibodies that specifically react with spores of S. chartarum. These antibodies were adapted into a simple test strip for rapid detection. CDC was granted U.S. patent number 7,368,256 for the technology and has partnered with two US companies, Advnt Biotechnologies and Alexeter Technologies, LLC. Both companies have developed Informant™ and IAQ Pro®, respectively, that rapidly and accurately test for the presence of many types of mold in the environment. These products are commercially available in Australia, Canada, Finland, France, Iceland, South Africa, South Korea, and the United States.