"We Were There" - Diacetyl and Popcorn Lung Disease

Not Everything Is Better with Butter-flavoring: Popcorn Lung Disease and the Dangers of Diacetyl On Wednesday, January 30th the “We Were There” lecture series presented “Not Everything Is Better with Butter-flavoring: Popcorn Lung Disease and the Dangers of Diacetyl,” at the Roybal Campus, Alexander D. Langmuir Auditorium.

Welcome to “We Were There,” a quarterly lecture series featuring past and present CDC researchers as they share their personal perspectives on historically important, epidemiologic and laboratory investigations. Each presentation provides insight into the rich past of CDC and gives the audience a chance to hear first-hand accounts from the responders.

In 2000, a physician reported that eight former microwave-popcorn factory workers had developed a rare and disabling lung disease, bronchiolitis obliterans. Four of the eight workers were ill and put on lung transplant waiting lists. After investigating numerous possible sources, researchers ultimately determined the cause of lung damage: a vapor from butter flavoring added to the popcorn. 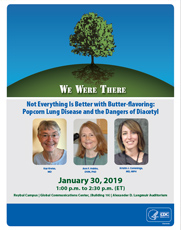