On Thursday September 5th the “We Were There” lecture series presented “Ebola in Zaire, 1976: The Past as Prologue,” at the Roybal Campus, Alexander D. Langmuir Auditorium.

Welcome to “We Were There,” a quarterly lecture series featuring past and present CDC researchers as they share their personal perspectives on historically important, CDC-led epidemiologic and laboratory investigations. This series will provide insight into the rich past of CDC and give the audience a chance to hear first-hand accounts from the responders.

In late summer of 1976, patients began presenting at a rural hospital in northwest Democratic Republic of Congo (then referred to as Zaire) with fever, headache, abdominal pain and severe bleeding. Malaria, severe typhoid, or yellow fever were initially suspected, but then ruled out. As case fatality rates rose to 80%, so did the uncertainty of the cause of this hemorrhagic disease.

Samples were first sent to Belgium, then to high-containment labs in England and Atlanta via Paris. Initially, the samples yielded alarming images of a filovirus resembling Marburg, but serology testing at the CDC showed a new virus, later named Ebola. By October, a strict quarantine resulted in the interruption of the disease and the outbreak subsided. Even more than four decades later, Ebola continues to reemerge – with devastating impact. 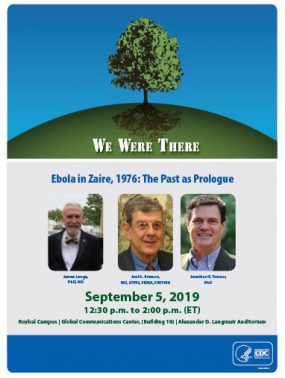