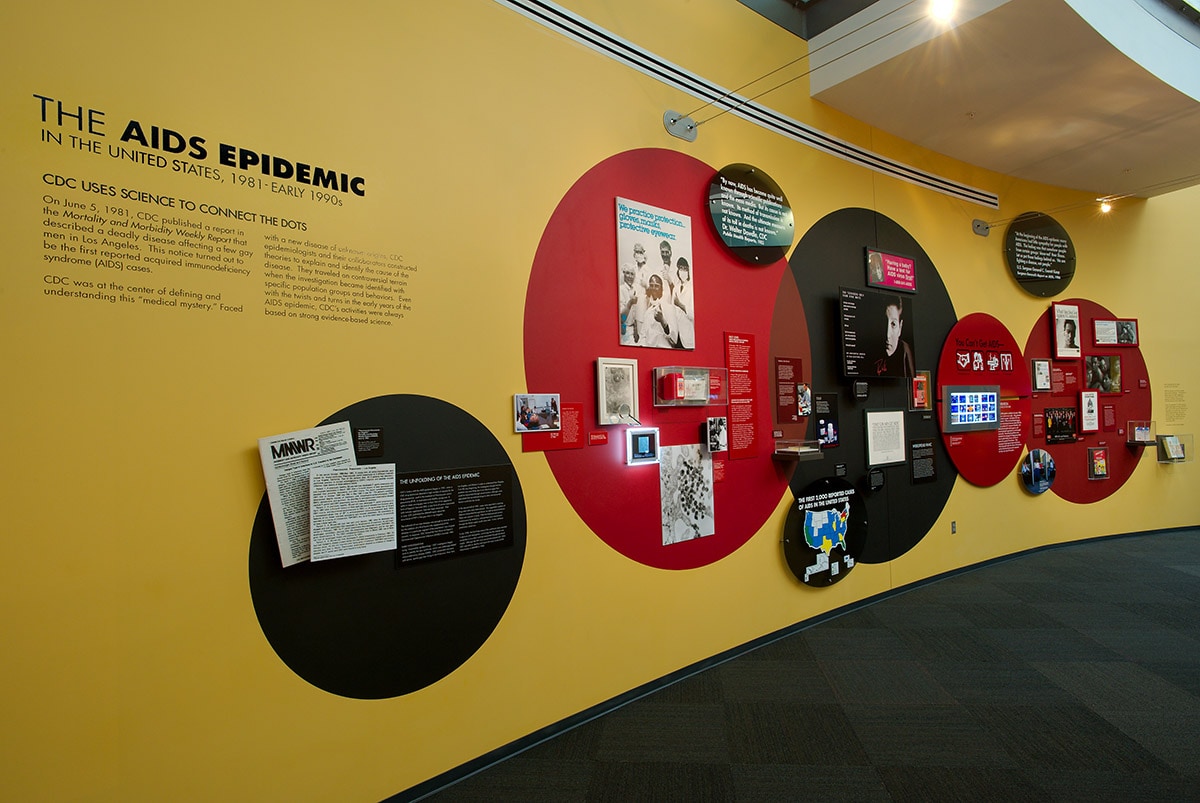 On June 5, 1981, CDC published a report in the MMWR describing requests for the drug pentamidine to treat a deadly disease called Pneumocystis carinii pneumonia (PCP) in five previously healthy young men in Los Angeles. After the report’s publication, health officials also noticed a spike in cases of Kaposi’s sarcoma (KS)external icon among gay men in New York. Health officials were alarmed that outbreaks of both PCP and KS, which were rare, deadly diseases associated with immune suppression, appeared in the same part of the population. 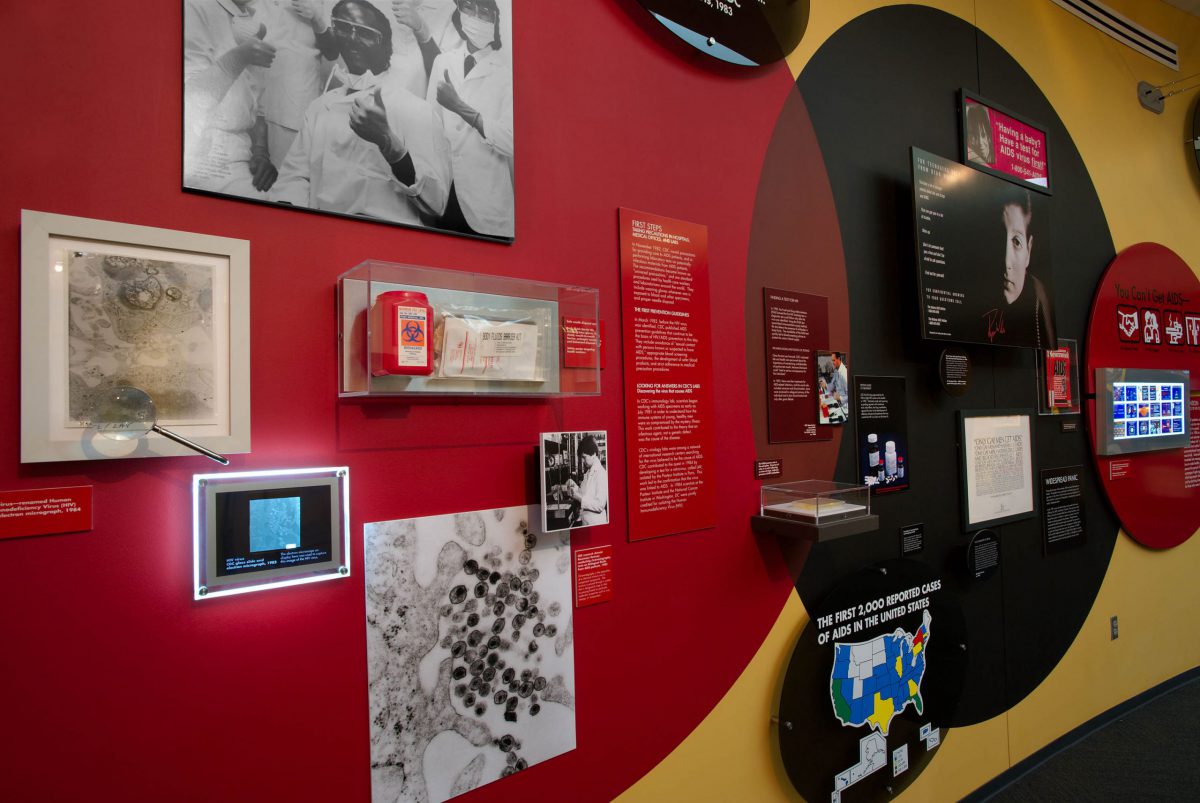 In response, CDC formed a Task Force on KS/OI in the summer of 1981. From the very beginning, investigators thought the problem was most likely due to an infectious agent that could be transmitted through sexual contact, although some speculated that recreational drugs or other environmental factors could also be causes. In late 1981, cases began to be seen in injection drug users who were heterosexual, suggesting a pattern of infection that could be transmitted through blood. By early 1982, health experts were concerned that transmission through heterosexual contact, transmission to newborns, or transmission through the blood supply could come next.  These predictions came true. Transmission through the blood supply was confirmed when immunosuppression was reported in three people with hemophilia. Representatives from CDC, other health organizations, other scientists, and representatives from blood banks, gay rights organizations, and hemophiliacs, met in Washington D.C. to determine ways to prevent the transmission and develop guidelines to screen the blood supply. 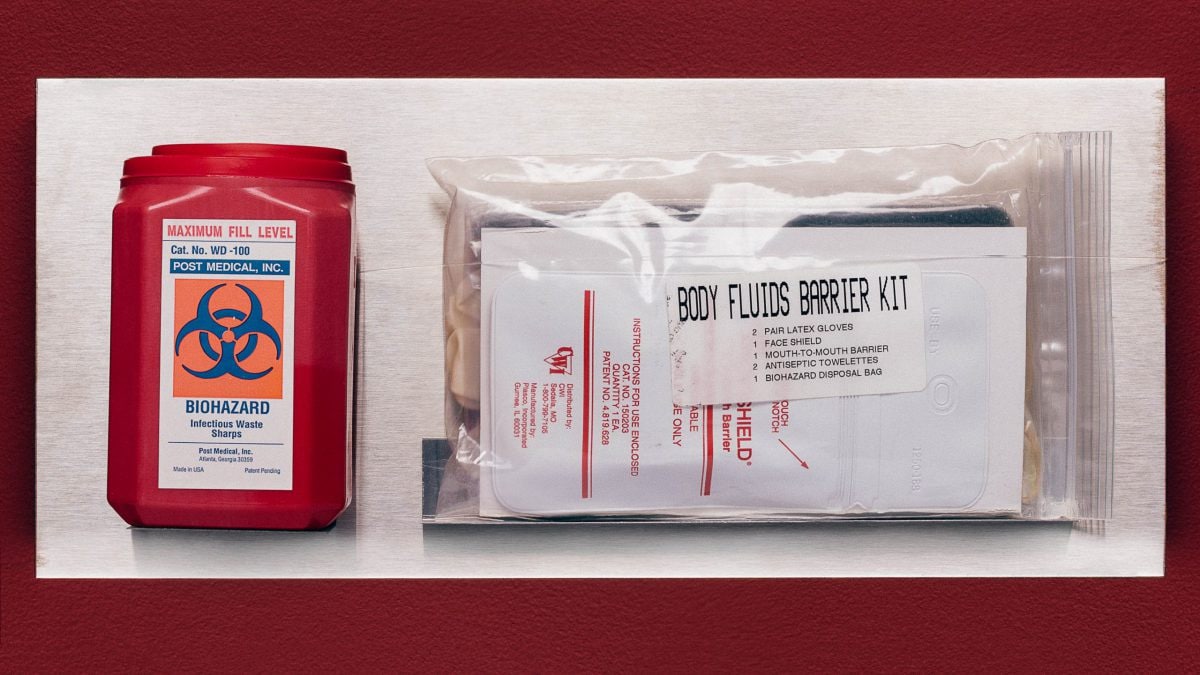 CDC issued guidelines for health workers providing care to AIDS patients and for laboratory technicians performing tests on potentially infectious materials from AIDS patients. The recommendations became known as “universal precautions,” and included wearing gloves when exposed to blood and other bodily fluids. In a poster promoting health workers using safety precautions, a group of five health workers are shown wearing gloves, masks, and goggles. Since the universal precautions also established using safe needle disposal cases, a needle disposal container is on display with the body fluids barrier kit. The disposal case is a red sealed plastic container with the biohazard symbol displayed prominently on all sides and an opening at the top into which used needles are disposed. 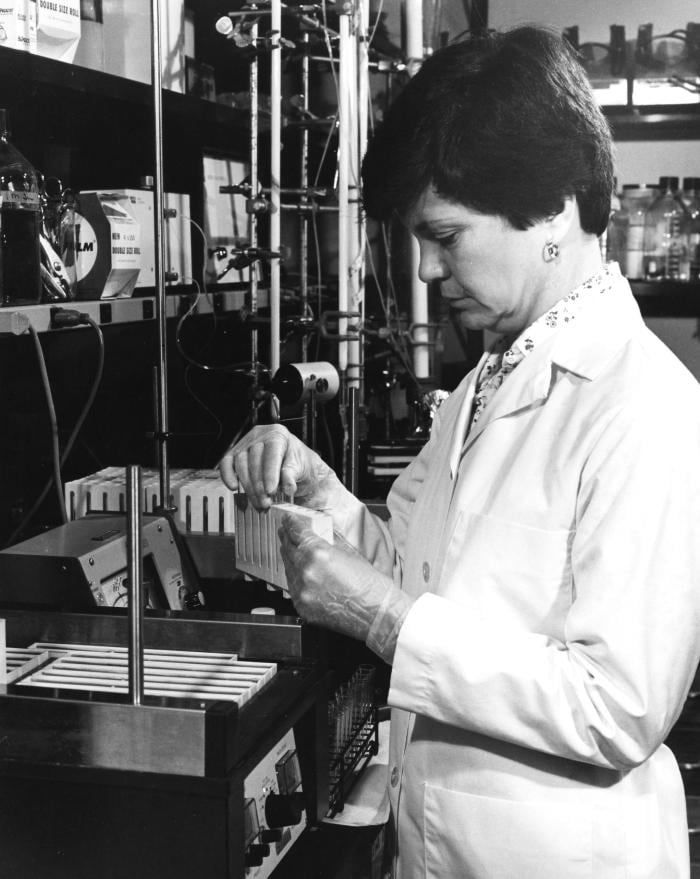 In CDC’s immunology lab, scientists began working with AIDS specimens as early as July 1981 to understand how the immune systems of young, healthy men were so compromised by the mystery illness. In a photograph from 1983 displayed here, a female CDC research chemist conducts tests on biological fluids from AIDS patients. This work contributed to the theory that an infectious agent, not a genetic defect, was the cause of the disease. CDC’s virology labs were among a network of international research centers searching for the virus believed to be the cause of AIDS. 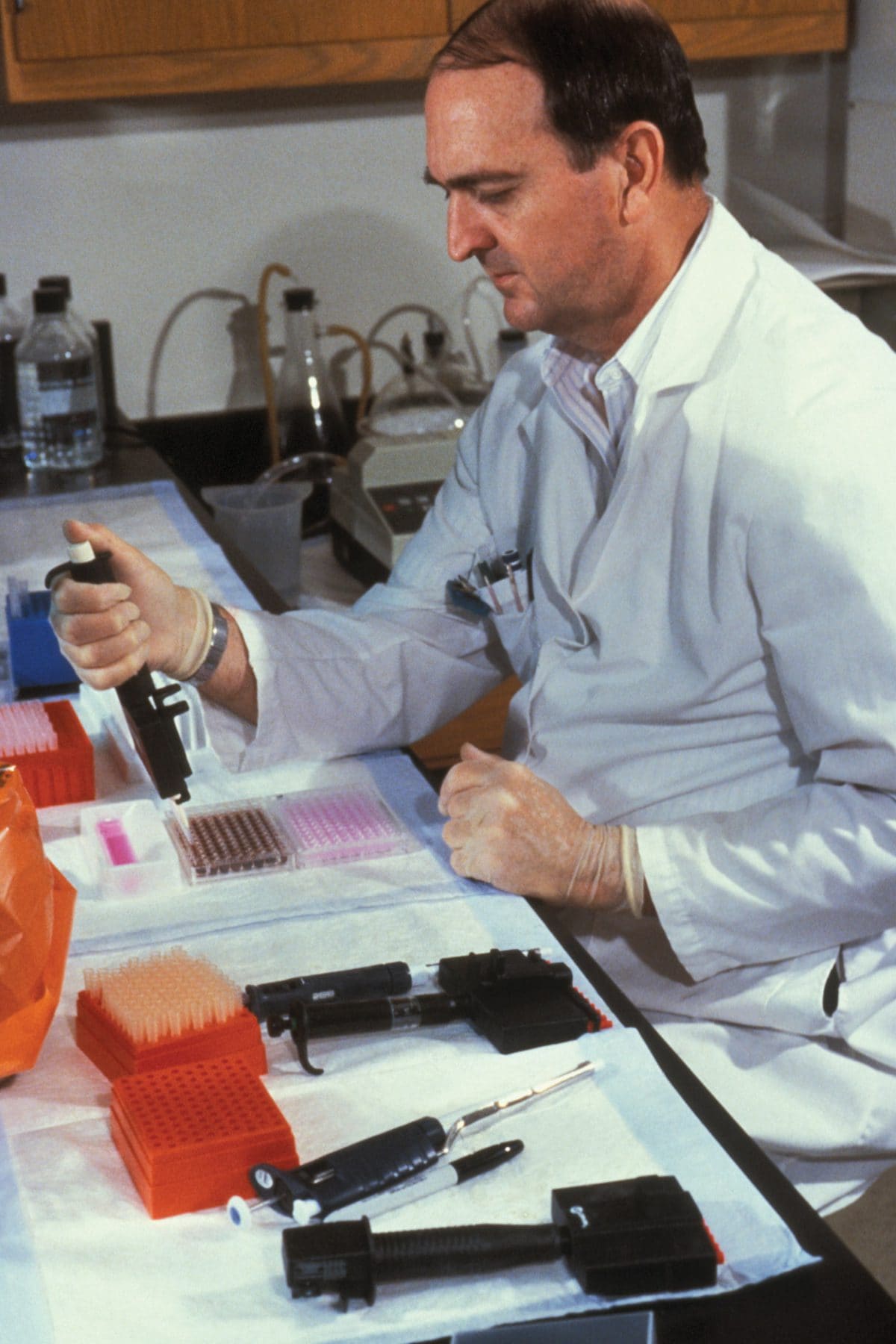 By the next year, the U.S Food and Drug Administration licensed the first commercial blood test, ELISA, to detect HIV. Blood banks begin screening the U.S. blood supply. In a photograph on display, a different CDC lab technician is performing the ELISA test. Using a plastic plate with 96 wells, the lab technician adds the patient’s blood to different enzymes. Certain reactions between the blood and the enzymes indicated the presence of HIV antibodies. 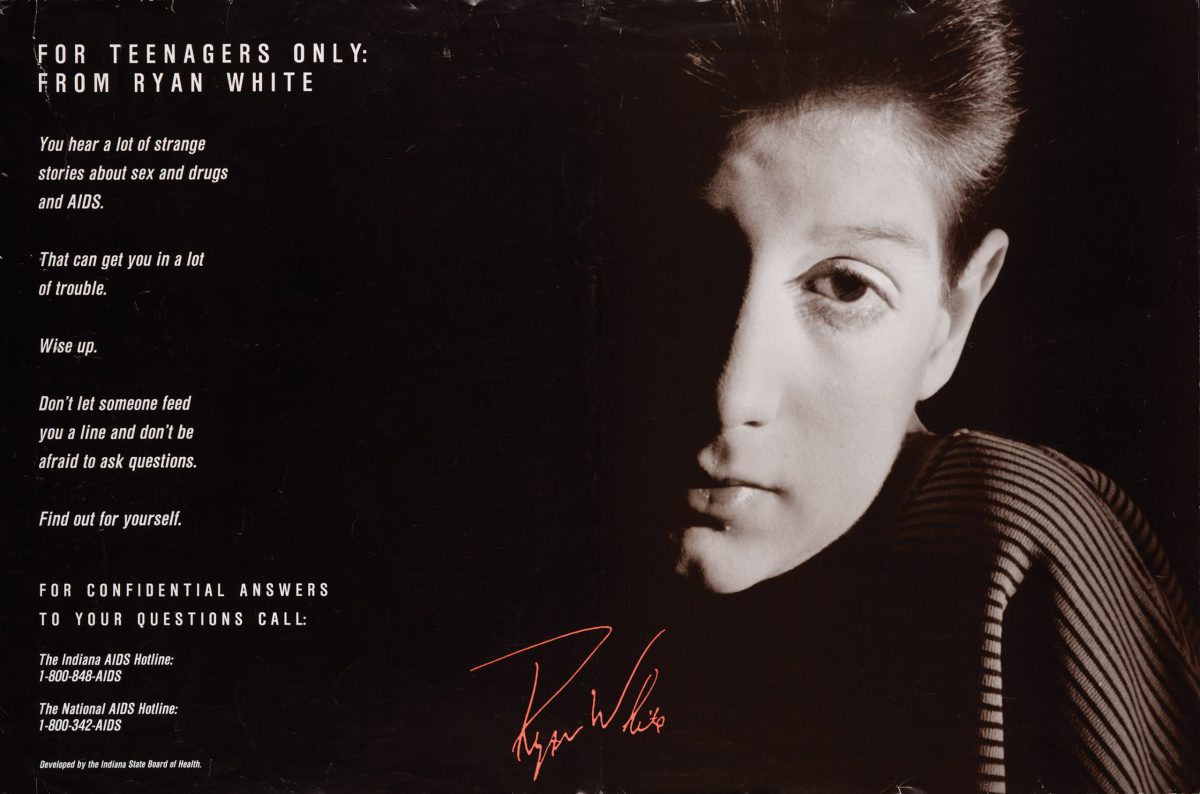 The first year of the AIDS epidemic seemed isolated to a few individuals in a few cities, so it received little media attention. When cases were reported in infants and people with hemophilia, widespread panic struck Americans. Those with AIDS were often stigmatized. In 1985, Ryan White, a teenage hemophiliac living in Indiana, contracted AIDS from a blood transfusion. Parents in his community feared he would expose their children to AIDS, resulting in Ryan being barred from attending school. 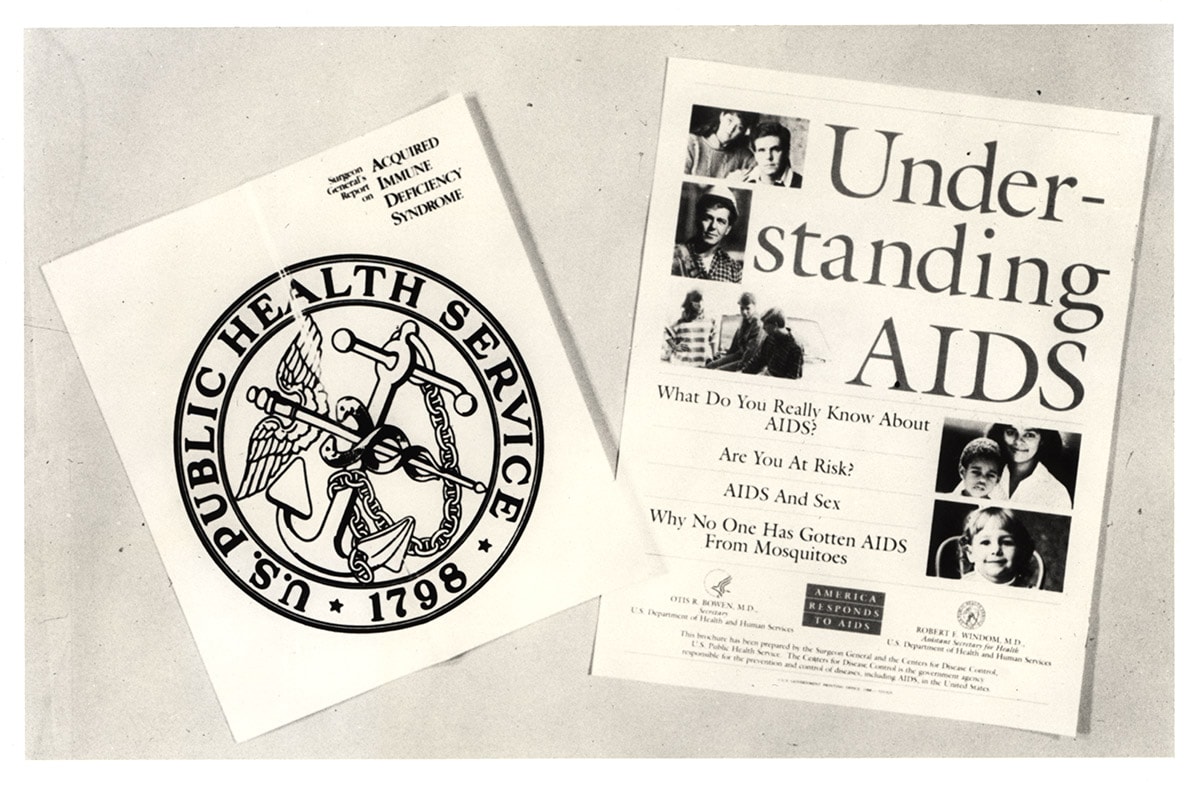 In 1986, U.S. Surgeon General C. Everett Koop issued the Surgeon General’s Report on AIDS. In it, he called for a comprehensive program of sex and AIDS education, urged the widespread use of condoms, and dispelled myths that HIV could be spread by mosquitoes. In 1987, CDC launched an unprecedented national campaign, America Responds to AIDS (ARTA). The goal of ARTA was to increase awareness and understanding of AIDS, to prevent HIV infection, and to encourage people to seek more information and counseling. CDC also began a program to support HIV prevention efforts with national minority organizations that provided HIV prevention expertise to community-based organizations, developed HIV prevention programs targeting minorities, especially African Americans and Hispanics, and supported groups that used culturally sensitive AIDS prevention programs to address their communities’ needs.

Even before CDC was designated in 1986 as the lead federal agency to inform and educate Americans about AIDS, the agency worked “with uncommon flexibility” with state and local public health agencies and community-based organizations to reach people most at risk. Science-based guidelines were translated into messages for target groups about how to make healthy choices, and how to prevent the spread of the disease. Other campaigns were designed to fight against stigma and fear by informing people about the nature of the disease, teaching tolerance and compassion for those who were HIV positive.

Displayed here are a set of slides from the HIV/AIDS Library and Narrative used by the Wisconsin Department of Health and Human Services in 1989 to train community-based AIDS service organizations. Furthermore, since testing became available in 1985, CDC began providing federal funds to establish an extensive system of alternate testing and counseling sites, leading to the first nationwide HIV- and AIDS-related prevention program. Today, testing—knowing one’s HIV status—is a key strategy in AIDS prevention.

In the 21st Century, AIDS has become one of our greatest public health challenges. The epidemic’s global impact has been staggering, claiming the lives of more than 39 million people worldwide, including 500,000 people in the United States. In the United States, an estimated 1.1 million people live with HIV/AIDS and every year, about 38,000 new HIV infections occur. While AIDS can be managed with antiretroviral drug treatments, there is still no cure or vaccine for AIDS. Prevention is still the best strategy.