The David J. Sencer CDC Museum Public Health Academy Teen Newsletter introduces teens to different public health topics that CDC studies. Each newsletter provides an Introduction, explains CDC’s Work, breaks down the topic using the Public Health Approach, gives you a behind the scenes look at historical items Out of the CDC Museum Collection, and offers a live Teen Talk where teens can learn from CDC experts.

This CDC program, established in 1951, is a unique combination of on-the-job-learning and service. Investigating outbreaks in the field is integral to the EIS experience. As CDC’s on-call disease detectives, EIS officers are among the agency’s first-line rapid responders. EIS officers help public health officials investigate and control infectious disease outbreaks and respond to natural disasters and other threats to the public’s health.

In the video below, EIS officers share their fellowship experiences, with the feature story focusing on how the EIS program has empowered one officer, a physician, to impact the health of populations as opposed to an individual alone.

What do EIS officers learn?
EIS officers learn to apply the science of epidemiology to solve public health problems. They learn surveillance methods and advanced epidemiologic techniques. They gain a broad knowledge in biostatistics, public health ethics and law, and other public health topics. They also receive communication and media training, as they frequently represent CDC in media interviews. In addition to being disease detectives, they also attend seminars and the annual EIS conference where they present findings from their investigations and studies.

The diagram below outlines the EIS curriculum. 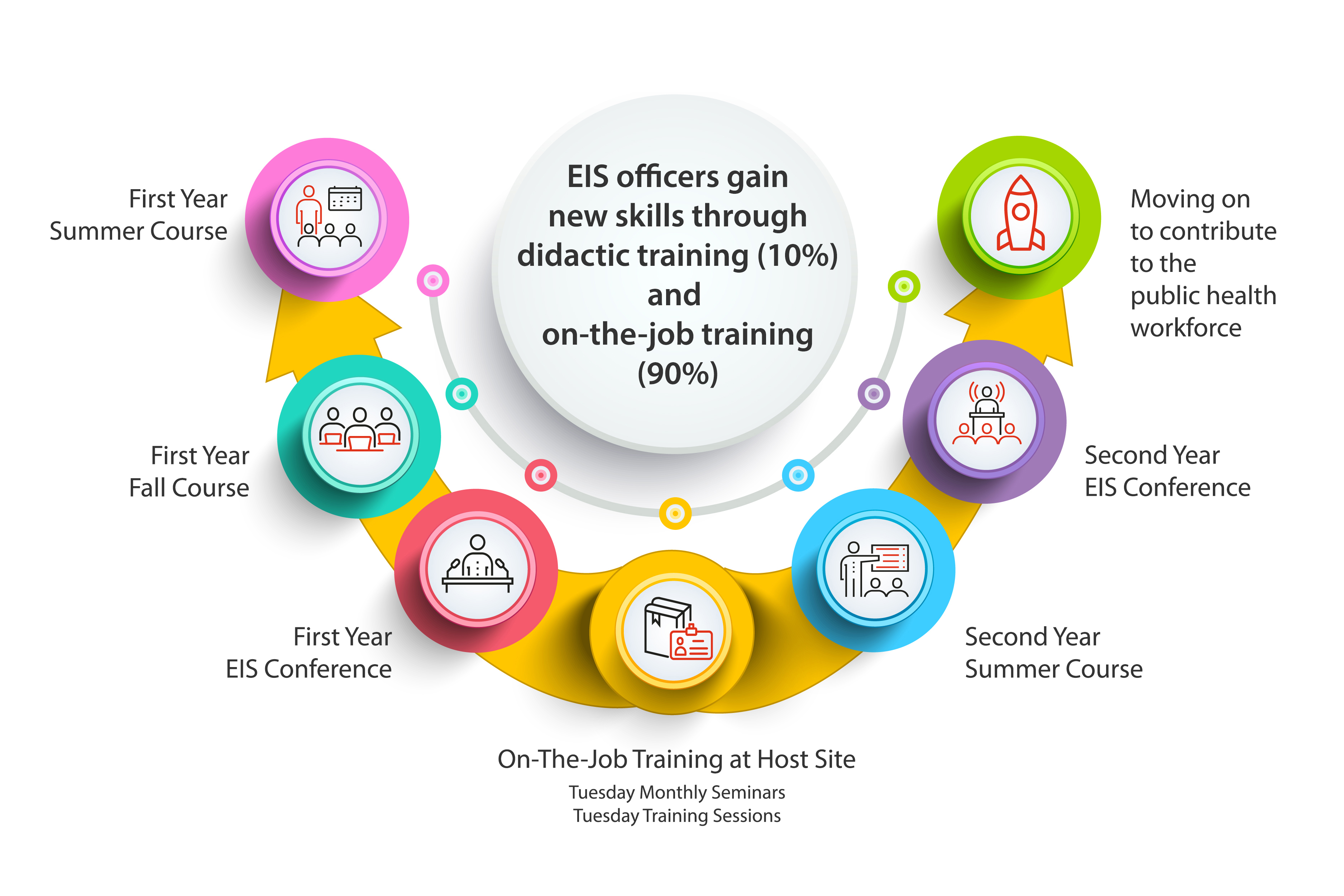 Who is eligible to apply?

EIS officers may be sent to another location on a temporary assignment. Although international work may be part of an EIS assignment, no EIS officers are based outside the United States.

What’s after EIS?
EIS provides a pathway for a wide range of careers. Many EIS graduates choose public health careers at the local, state, or federal level. EIS alumni who stay in public health ensure that CDC and other agencies have sustainable epidemiologic expertise. Alumni include:

The EIS program is hosted by the Center for Surveillance, Epidemiology, and Laboratory Services (CSELS).

EIS officers are ready to go anywhere in the world at a moment’s notice to:

The below is a timeline of key EIS investigations.

Each year, approximately 30% of EIS officers are assigned to state, local, or territorial health departments or other partner organizations or agencies. These EIS officers are referred to as “field assignees.” Similar to their counterparts assigned to CDC, EIS field assignees participate in and lead epidemiologic investigations, conduct surveillance studies, interact with the public and the media, and produce high-quality scientific presentations and publications.

The map below shows us where EIS officers are assigned across the nation. 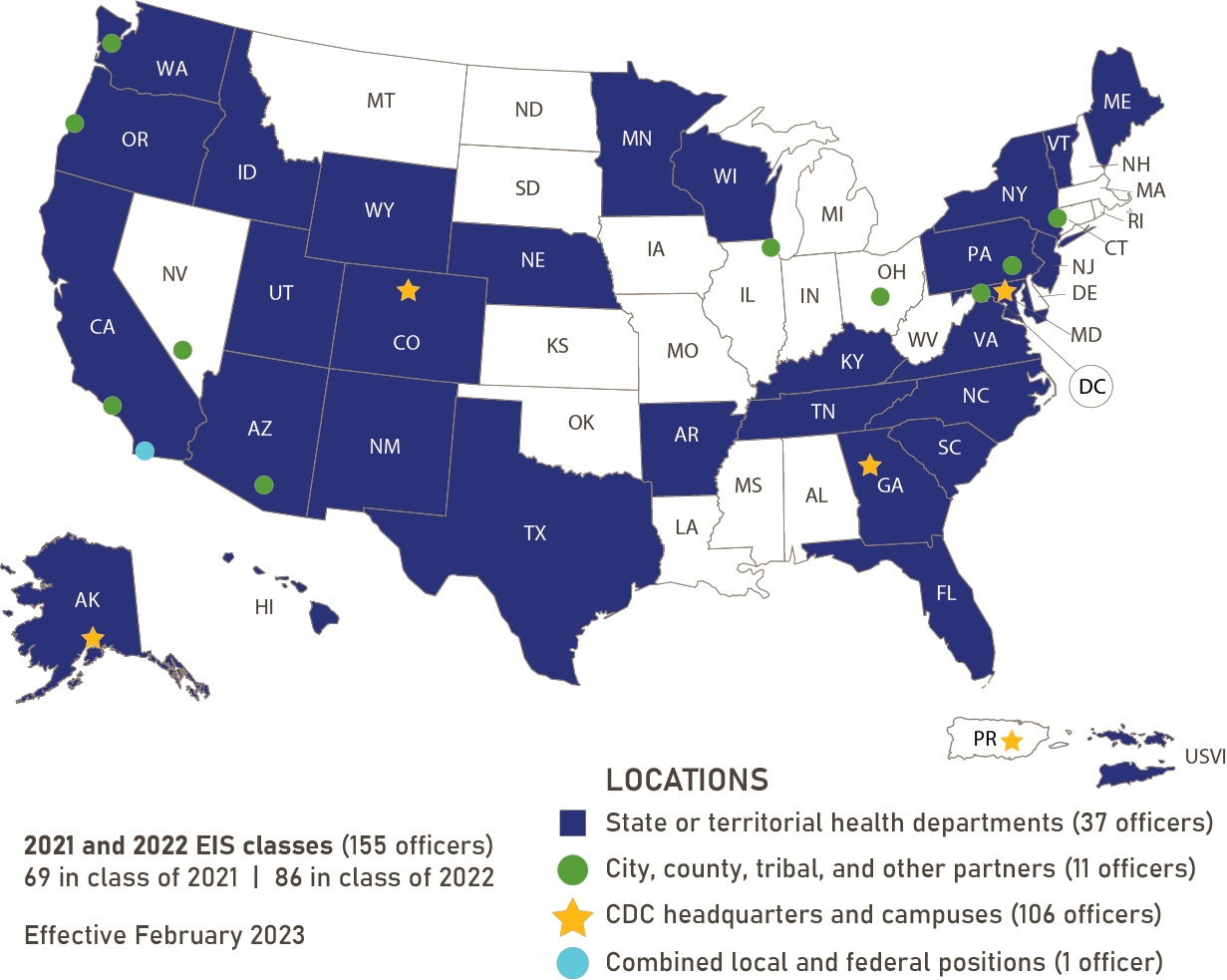 Check out EIS: A Snapshot of Public Health Achievements to learn more. It highlights milestone investigations that improved health, made a difference in thousands of lives, and effected change in communities and entire countries.

For ease of explaining and understanding the public health approach for the EIS program, let’s explore how an EIS officer might respond to an emergent outbreak.

1. Surveillance (What is the problem?). In public health, we identify the problem by using surveillance systems to monitor health events and behaviors occurring among a population.

One of the ways the EIS program supports the state and local health departments is through Epi-Aids. An Epi-Aid is a rapid (1-3 weeks) investigation of an urgent public health problem, such as infectious or non-communicable disease outbreaks, unexplained illnesses, or natural or human-made disasters. The focus of an Epi-Aid investigation is to assist partners in making rapid, practical decisions for actions to prevent and control the public health problem. In February 2009, when two fatal cases of Streptococcus pneumoniae meningitis occurred at an Army training center at Fort Leonard Wood, MO, it was time for disease detectives to get to work. Facts of the case include that both fatalities were in the Alpha Company (with 303 total trainees). Also, the number of cases of pneumonia increased during this time. 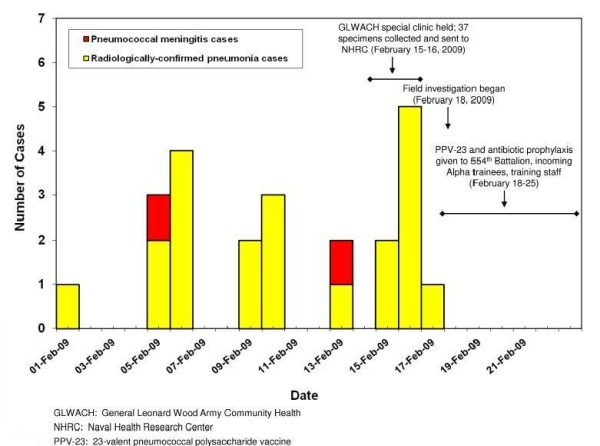 2. Risk Factor Identification (What is the cause?). After we’ve identified the problem, the next question is, “What is the cause of the problem?” For example, are there factors that might make certain populations more susceptible to diseases, such as something in the environment or certain behaviors that people are practicing?

Military trainees are at increased risk for respiratory infections compared to the general civilian population. Crowded living conditions and intense physical stress may contribute to an increased risk for infections with pneumonia, adenoviruses, and influenza viruses. Outbreaks of pneumococcal disease are relatively rare in the general civilian population, but sporadic outbreaks of pneumococcal pneumonia have been reported among military trainees in the past.

EIS officers collected data on symptoms, past medical history, laboratory testing, exam findings, and recent treatments that trainees and training staff had received. They reviewed medical records from the training camp and civilian hospitals, including a list of trainees who were too ill to participate in routine training and medical charts of patients with pneumonia in the troop companies.

3. Intervention Evaluation (What works?). Once we’ve identified the risk factors related to the problem, we ask, “What intervention works to address the problem?” We look at what has worked in the past in addressing this same problem and if a proposed intervention makes sense with our affected population.

EIS officers surveyed all trainees and training staff, along with trainees who came to the camp from their homes in the community. Nasal and throat swabs were collected from certain trainees and staff.

After the data were collected, the epidemiologists created a database with the information. Epidemiologists determined that the two fatal cases of meningitis were the only meningitis cases identified during the investigation period, and 72 cases of pneumonia were identified among all the trainees. They were able to rule out the following risk factors as not being associated with getting sick: taking antibiotics, living in a bay (more than four trainees per room), smoking, having one or more illness symptoms, and living on a particular floor of the barracks.

EIS officers gave the 23-valent pneumococcal polysaccharide vaccine (PPV23), which takes two weeks to take effect, along with prophylactic (preventive) treatment using antibiotics to halt new infections from occurring or being spread to others.

4. Implementation (How did we do it?). In the last step, we ask, “How can we implement the intervention? Given the resources we have and what we know about the affected population, will this work?”

The EIS officers were able to stop the outbreak after trainees and training staff received vaccinations and antibiotics, and after hand hygiene and cough etiquette were strengthened.

The epidemiologists used what they learned to prevent future outbreaks from occurring. The information gained from this investigation improved outbreak detection and timely response at military training installations, and new vaccines provided opportunities to reduce pneumonia among military trainees in the future.

Using The Public Health Approach helps public health professionals identify a problem, find out what is causing it, and determine what solutions/interventions work.

Out of the CDC Museum Collection – Epidemic Intelligence Service (EIS)

Dr. Alexander D. Langmuir created the EIS program in 1951 to aid the states in the control of communicable disease. At its inception, the EIS program was part of the U.S. government’s efforts to detect biological warfare during the Korean War, but its success in detecting outbreaks led to it continuing today. Learn more about the history of the EIS program. 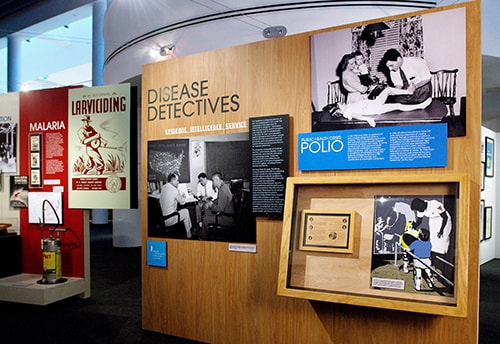 Our first stop in the exhibit is the Disease Detectives panel highlighting work done by EIS officers. The EIS program was instrumental in stopping a human-made polio epidemic in the mid-1950s.

Next, we are going to check out some EIS class gifts that are on display at the museum. The tradition of class gifts (also known as class plaques) began in 1953 with the first EIS class of 1951. The first class presented Dr. Alex Langmuir two well-worn leather shoes that had come to symbolize the shoe-leather epidemiology practiced by EIS Officers. This, along with the performance of a funny EIS skit, became a tradition for EIS classes that continues even today. In 2004, the collection of class gifts was donated to the CDC David J. Sencer Museum (formally known as the Global Health Odyssey Museum), located at CDC Headquarters. 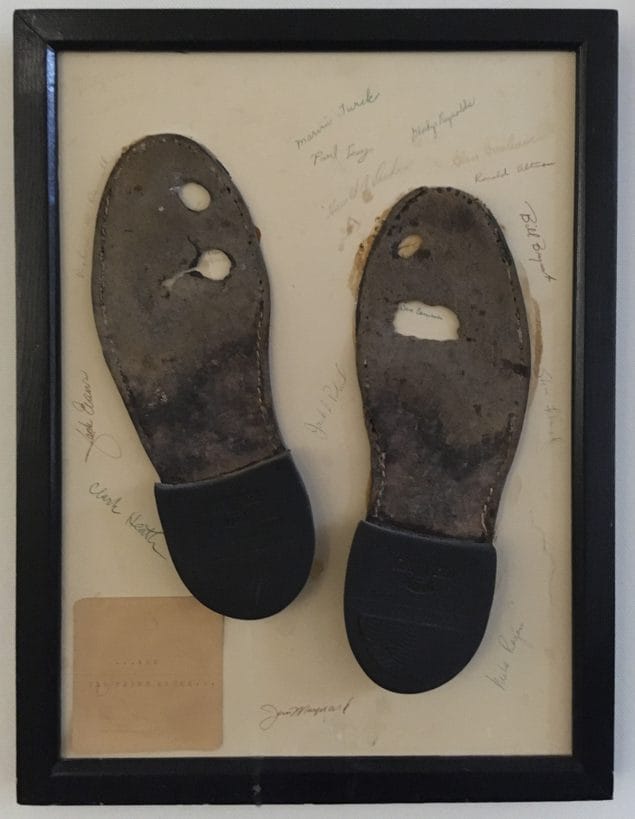 1960 EIS Class Gift Plaque, which shows the traditional symbol of the EIS program, a pair of worn shoes with holes. 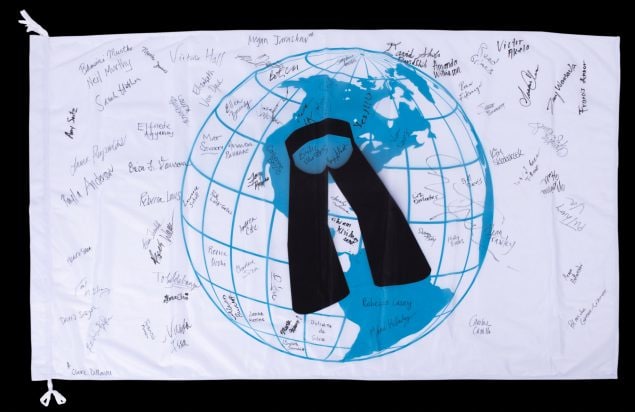 2016 EIS Class Gift Plaque, which is a nearly six feet tall cloth polyester flag featuring the class project. Sarah Luna designed the chaps flag and signed it along with her class of seventy-nine officers. Instead of the worn leather shoes, the class designed a flag that represented their “butt leather epidemiology” working at computers from desk due to deployment setbacks.

The EIS Class Gift online exhibit provides pictures and background stories from the donor class. The gifts and stories provide something of the lighter side of the EIS experience, an experience that benefits from humor and bonds these officers not only within each class but across decades.