Today’s CDC is known for assisting U.S. state health departments and other countries’ ministries of health during local outbreaks and emergency responses. While the malaria control program set precedent for this practice, the Epidemic Intelligence Service (EIS) improved CDC’s ability to support states. Dr. Alexander D. Langmuirexternal icon created the EIS program in 1951 to aid the states in the control of communicable disease.

At its inception, the EIS program was part of the U.S. government’s efforts to detect biological warfare during the Korean War, but its success in detecting outbreaks led to it continuing today. Now, it’s a 2-year training program for health professionals interested in the practice of applied epidemiology, or the study of diseases in populations. During their time at CDC, these professionals are called EIS officers. EIS Officers earned the nickname of “Disease Detectives” because they practice “shoe-leather” detective work, wearing down their shoes as they go door-to-door to investigate outbreaks.

This idea is reflected in the EIS symbol of a globe and a shoe with a hole in its sole. An exhibit photograph taken in 1955 shows Dr. Langmuir and two EIS officers discussing epidemiology strategies in his CDC office. Across the world, EIS officers conduct surveillance and respond to epidemics, chronic diseases, and injuries. Many of the nation’s medical and public health leaders, including CDC directors and deans of the country’s top schools of public health, are former EIS officers.

The EIS program was instrumental in stopping a man-made polio epidemic in the mid-1950s. Before digging into this incident, it is helpful to learn more about the disease itself. Polio is a crippling and potentially fatal infectious disease caused by the poliovirus. The virus enters the human body through the mouth and exits via the digestive system. For most, this virus passes through undetected, but for others, the virus can cause nerve damage, resulting in paralysis. Also seen in the image above is a photograph showing a little girl lying on a table with a male doctor standing beside her. The doctor is bending her leg at the knee to test if she may have the lower-limb paralysis associated with polio.

Polio was the great equalizer and fear swept through the U.S. for the first half of the 20th century. Little was known about how the disease spread, leading to closed pools in summer and empty playgrounds as parents tried to protect their children from falling ill. This widespread fear prompted President Franklin D. Roosevelt, in 1938, to ask his counsel Basil O’Connor to form and oversee the National Foundation for Infantile Paralysis. Today, this organization is known as the March of Dimes. This organization collected money for polio research, which made possible funding for the first polio vaccine.

The End of Polio 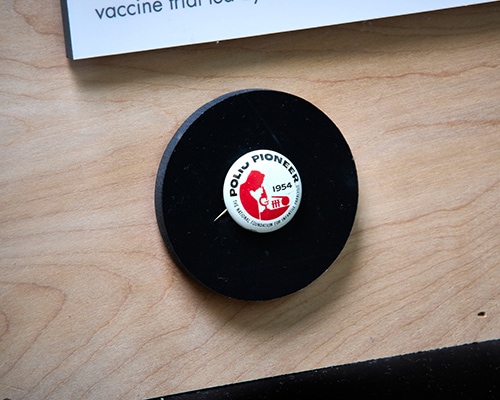 Dr. Jonas Salk created the first polio vaccine in the early 1950s. Children who participated in the first polio vaccine trials in 1954 received polio Pioneer Pins, like the one shown here. The pin is approximately one inch in diameter, has a white background with a red silhouette of a man looking into a microscope, and has the words “Polio Pioneer, 1954,” and “The National Foundation for Infantile Paralysis” printed on it.

In an interesting coincidence, one of CDC’s greatest Disease Detectives, the late Dr. Steve Thackerexternal icon, was part of the vaccine trial and remembered receiving his polio pioneer pin. The highly successful vaccine trial led to the vaccine’s implementation the following year. Since then, the number of new cases of polio in the U.S. dropped each year, until the final endemic case in 1979. Today, CDC is working with other agencies across the world to eradicate, or completely remove, polio. As of 2019, the disease is only endemic, or naturally occurring, in two countries: Pakistan and Afghanistan.

Now, back to the man-made polio outbreak mentioned earlier. Today, the U.S. Food and Drug Administration (FDA) oversees vaccine licensing, a process that requires significant funding and years to complete. But in 1955, no such agency existed. A small federal agency, the Laboratory of Biologics Control, had the power to approve vaccine production. Eager to meet public demand, the polio vaccine was licensed in just two hours, and state and local health departments began campaigns to vaccinate millions using vaccines produced by a handful of private pharmaceutical companies.

Shortly after the program was implemented in the U.S., 40,000 cases of paralytic polio in recently vaccinated children were detected by health departments that reported the numbers to CDC. In the subsequent weeks, 260 children were paralyzed, and ten children died. EIS officers at CDC used epidemiology to trace the outbreak to a few batches of vaccines from California’s Cutter Laboratories that were not properly produced. In the faulty vaccines, the poliovirus used in the vaccine wasn’t properly killed, and therefore caused polio instead of protecting against it. The investigation resulted in the establishment of rigid production controls to ensure the vaccine’s safety, and the public’s confidence in the vaccine was restored in a matter of weeks. The Cutter Incident, as it came to be called, also put CDC and the EIS Disease Detectives in the national spotlight as a valuable disease investigating program. 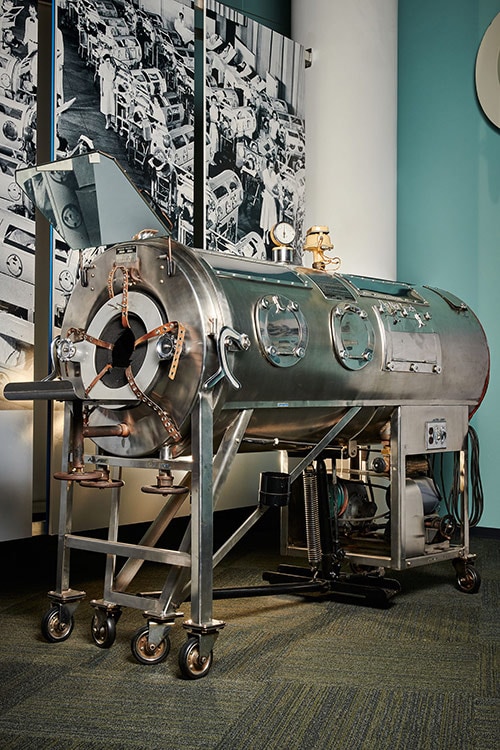 The large silver machine pictured here is called an iron lung. The machine gets the name “iron lung” because it is made of metal and helps people breathe. The iron lung is a 6-foot-long cylindrical unit that functions as a ventilator, or breathing machine, for people who were paralyzed in the upper body by polio. This iron lung is large enough to hold a grown adult — about six feet from end to end with a three-foot circumference — but two smaller sizes were also available for smaller patients. Six supports elevate the main compartment four feet from the ground. The main compartment has four long rectangular windows, five circular access ports, and one square access port, all along the sides of the device. The windows and access ports are used by healthcare workers to provide care and treatment to the patients. In addition, there are gauges and valves on top of the machine to monitor the interior pressure of the main compartment.

The Man in the Iron Lung

Behind the iron lung is a photograph taken of a 1950s iron lung ward with dozens of children in iron lungs. Because it was an expensive machine, families often could not afford to have a machine at their house and had to send sick children to hospitals far away.

Barton Hebert, Jr. was a polio patient who owned and used this iron lung from the late 1950s until he passed away in 2003. While he eventually was able to use a portable respirator for portions of the day, Barton describes how he always slept in his iron lung because it was comfortable.

When Barton passed away, his family donated his iron lung to the CDC Museum. Barton wanted the machine to go a place where people could learn about the trials faced by polio patients and understand the importance of vaccinating against it and other diseases. We are honored to have been chosen as the place to house Barton’s iron lung.