Enhanced Comprehensive HIV Prevention Planning (ECHPP) addresses the principles, goals, and objectives articulated by the National HIV/AIDS Strategyexternal icon (NHAS) as well as the Division of HIV/AIDS’ DHAP Strategic Plan which reflects High-Impact Prevention (HIP). In September 2010, 12 local and state health departments, which represent jurisdictions with the highest burden of AIDS cases, began enhanced planning and implementation of HIP. These planning and implementation activities reached beyond CDC-funded prevention efforts and included other funding sources. The experiences of, and progress to date made by these 12 health departments provide other communities with valuable lessons about how to use policy and planning activities to address national HIV prevention goals.

The promising practices summarized here are based on the grantees’ experiences and activities during the initial phase of ECHPP, which covered the planning phase as well as initial implementation activities. Five categories of promising practices are listed and described below. Each description is followed by examples from the ECHPP jurisdictions. Neither the list of practices nor the ECHPP examples is exhaustive; they are only illustrative and serve as a complement to the more in-depth jurisdiction-specific descriptions found on the Grantee Profile Pages. 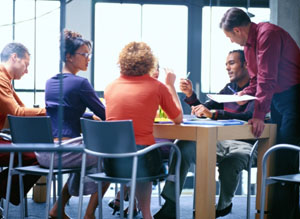 Between October 2010 and March 2011, ECHPP communities engaged in rapid assessment (i.e., less than 6 months) and strategic review of existing local HIV prevention programming. Gathering relevant current local information on the status of prevention programs and service gaps that needed to be addressed often proved difficult and time-consuming, but was vital to the process. Deciding how to reallocate resources required consideration of factors and information from a variety of data sources, including local epidemiologic data, cost-effectiveness data, evidence of local partners’ capacity and engagement in service delivery, etc. Below are examples of approaches that ECHPP grantees used to navigate challenges related to data collection, synthesis and use for reallocating resources to increase the effect of their HIV prevention portfolios.

Conducting a thorough and broad review of local HIV prevention service resources helped health departments identify important gaps in prevention and opportunities for strengthening and improving coordination of services. Although many health departments have a needs assessment on file, conducting the situational analysis for ECHPP highlighted new or emerging prevention program or data needs and service gaps.

In order to conduct planning in support of HIP, it was necessary to draw on a wide variety of relevant data sources. Considering programmatic and resource allocation decisions within the context of local epidemiology was essential, but not sufficient. It was also important to consider current effectiveness data about intervention strategies, information about local capacity to scale up specific interventions, and cost data. Indeed, applying return on investment or cost-effectiveness analytic tools or frameworks to the assembled data was particularly helpful to decision makers, many of whom continue to grapple with reductions in the resources available to support HIV prevention.

Mathematical modeling can aid planning efforts by synthesizing program cost, efficacy and other data to identify the most cost-effective approaches to HIV prevention, clarify priorities, and guide resource allocation decisions. However, mathematical models cannot incorporate all aspects of decision making and rarely provide the final word on the best use of resources. Modeling results should not, therefore, be viewed as formulas for prevention; rather, they provide additional sources of input for planners charged with making critical program decisions.

Several jurisdictions collaborated with academic and private partners to develop and apply mathematical models that could help health departments decide how to allocate their available HIV prevention resources. Each jurisdiction used a slightly different approach, but in every case, the options and additional information the models produced were considered when making final decisions about aligning resources. The Maryland Department of Health and Mental Hygiene, for example, utilized mathematical modeling to analyze the cost effectiveness of various HIV testing approaches, develop a resource optimization model to inform the allocation of current resources, and quantify the additional resources that would be needed to reach the prevention goals of the NHAS. The New York City Department of Health and Mental Hygiene used a mathematical model to examine optimal combinations of HIV prevention strategies that could maximize the number of new infections averted given current and expected future funding constraints. The Los Angeles County Department of Public Health Division of HIV and STD Programs utilized a Robust Decision Making modeling approach to examine options for distributing existing resources to have the greatest effect in HIV prevention as well as to quantify the risks and benefits of outcomes associated with each option.

Strong and productive partnerships are critical to the successful implementation of jurisdictional HIV prevention plans. ECHPP has both strengthened existing relationships between health departments and community partners and provided a focal point for new partnerships that support a more coordinated response to local HIV epidemics.

The local communities most affected by HIV are essential allies and partners in prevention. Engaging these communities’ support for and input into the bold shifts needed to increase the effect of HIV prevention efforts is critical to reaching the goals of the NHAS.

Engaging community, stakeholder, and prevention partners The local communities most affected by HIV are essential allies and partners in prevention. Engaging these communities’ support for and input into the bold shifts needed to increase the effect of HIV prevention efforts is critical to reaching the goals of the NHAS.

Many ECHPP plans included activities that increased collaboration internally within the health department as well as externally among HIV service organizations. Making major shifts in HIV prevention included creating new and strengthening existing partnerships with a variety of important stakeholders. Partnered organizations must function in a more coordinated fashion to successfully implement these combinations of public health strategies. Broadening partnerships with providers and other entities has also been an important aspect of the ECHPP plans. ECHPP grantees have been able to build on existing partnerships and create new ones to improve coordination and expand reach of programmatic activities.

Internally, collaborations among HIV prevention, care and treatment units within the health department have been and continue to be important for jurisdictions developing a comprehensive HIV prevention plan. Various structural factors (e.g., separate funding streams and planning efforts) have created and sustained long-standing HIV prevention and care silos within many ECHPP-funded health departments. By successfully bridging these silos, ECHPP grantees have better positioned themselves to execute the ambitious shifts in comprehensive HIV prevention planning required for ECHPP and for implementing the NHAS. Growing and sustaining these collaborations will also help to support long-term improvements in community and public health operations.

Local and institutional policies and regulations can support or impede better HIV prevention and care. To be sustained, shifts in HIV prevention efforts as suggested by NHAS should be reinforced rather than undermined by existing policies and regulations. Although health departments often do not have sufficient staff resources to devote significant time to advance policy activities, there are often some that can be accomplished with less commitment of time and resources. ECHPP health departments benefited from a careful review of potential actions in this category, often resulting in manageable objectives that supported HIV prevention efforts.

Use of Data to Improve Service Delivery

Improving the coordinated and strategic use of programmatic, clinical, and surveillance data can greatly support improved quality and timeliness of client services for HIV prevention. One such improvement is the creation of secure mechanisms by which databases can to talk to one another. Many of the ECHPP health departments made great progress in this effort, as described below.

Implementing combination prevention is key to achieving the NHAS; therefore, the role of care and treatment is increasingly integrated with HIV prevention interventions and strategies. This raises issues around coordination and management of program activities across these domains.

A practical way to support better coordination is to improve communication and relationships between planning bodies for both HIV care and prevention. The relationships between these critical planning bodies vary across jurisdictions. Many ECHPP health departments made efforts to improve the level of cross-communication and coordination between them in the first year of implementation.

Additionally, every organization must discover its own best way to manage the large and diverse portfolio of activities inherent within the NHAS and its vision of collaborative, coordinated efforts across a diverse array of stakeholders who together pursue change across a broad front. Such a complex tangle of relationships, investments, and activities require adjustments to a health department’s operations, structure, priorities and resource allocations. ECHPP grantees implemented a variety of approaches to address these issues in a way that supported improved coordination.