Tests to check HIV viral loads, CD4 cell counts, and HIV resistance (“HIV molecular data”) are frequently conducted for clinical purposes on samples from people with HIV. Data collected from these tests can also be used to provide information about the effectiveness of and need for prevention and treatment programs.

HIV viral load measurements indicate the number of copies of the HIV that are in a milliliter of a person’s blood. HIV medicine, when taken as prescribed, reduces the amount of HIV in the body (viral load) to a very low level, which keeps the immune system working and prevents illness. This is called viral suppression. HIV viral loads are routinely monitored; a high viral load may indicate presence of drug resistant virus or potential issues with treatment adherence. A person with HIV who takes HIV medicine as prescribed and gets and stays virally suppressed will not transmit HIV to their sex partners.

CD4 is a protein found on the surface of some white blood cells. Measuring white blood cells with CD4 (CD4 cell or “T-cell” counts) provides a measure of a person’s immune function. HIV infection when untreated reduces CD4 cell counts. Among people with HIV, CD4 counts are often used to monitor disease progression, need for additional prophylaxis for opportunistic diseases, and determine the stage of HIV infection.

HIV resistance tests are used when a person enters care or re-enters care to select an appropriate treatment regimen. Most commonly, these resistance tests ascertain the sequence of genes in the virus that produce proteins targeted by antiretrovirals to treat HIV. These HIV viral sequence data are used by clinicians to determine if virologic failure is due to drug resistance and to select an appropriate change in treatment. These HIV viral sequence data can also be used for public health applications to identify drug-resistance trends on the population level and to identify rapid transmission of HIV in people, including those living in areas with gaps in treatment and prevention. When viral load, CD4 counts and molecular data are reported, public health agencies can more effectively allocate resources for HIV prevention and care, monitor trends, identify gaps in HIV treatment and prevention, and ensure that people with HIV are and remain in care.

While all states, the District of Columbia, Puerto Rico, and the U.S. Virgin Islands have enacted laws or regulations (laws) requiring laboratory reporting, not all laws require reporting of all viral load, CD4 count, and molecular data. As of 2021, 48 states, the District of Columbia, and Puerto Rico meet the criteria for requiring all CD4 and viral load data reported. Of these, 28 states and Puerto Rico, also required molecular data reporting. Two states and one U.S. territory do not meet the criteria for reporting all viral load, and CD4 counts: Idaho, New Jersey,  and the Virgin Islands. 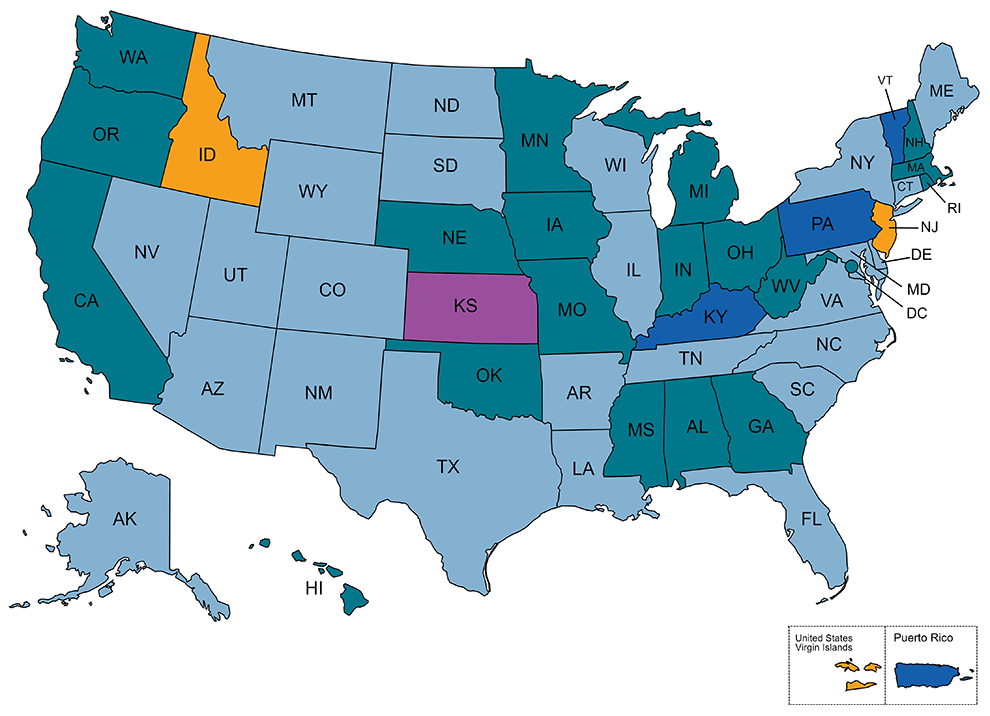 Require the Reporting of All CD4 Counts, Viral Loads, and Molecular Data (n=25)

Require the Reporting of All CD4 Counts, and Viral Loads (n=20)

Do Not Require the Reporting of All CD4 Counts, Viral Loads, or Molecular Data (n=3)

Require the Reporting of All CD4 Counts, Viral Loads, and Molecular Data, but Do Not Have Complete Reporting of Laboratory Data to CDC (n=4)

The information presented here does not constitute legal advice and does not represent the legal views of the Centers for Disease Control and Prevention or the Department of Health and Human Services, nor is it a comprehensive analysis of all legal provisions relevant to HIV. This information is subject to change and does not contain measures implemented by counties, cities, or other localities. Use of any provision herein should be contemplated only in conjunction with advice from legal counsel.