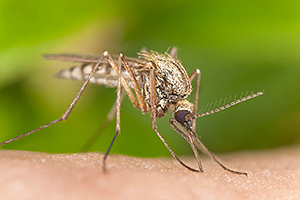 Climate is one of the factors that influence the distribution of diseases borne by vectors (such as fleas, ticks, and mosquitoes, which spread pathogens that cause illness). The geographic and seasonal distribution of vector populations, and the diseases they can carry, depends not only on climate but also on land use, socioeconomic and cultural factors, pest control, access to health care, and human responses to disease risk, among other factors. Daily, seasonal, or year-to-year climate variability can sometimes result in vector/pathogen adaptation and shifts or expansions in their geographic ranges. Such shifts can alter disease incidence depending on vector-host interaction, host immunity, and pathogen evolution. North Americans are currently at risk from numerous vector-borne diseases, including Lyme, dengue fever, West Nile virus disease, Rocky Mountain spotted fever, plague, and tularemia. Vector-borne pathogens not currently found in the United States, such as chikungunya, Chagas disease, and Rift Valley fever viruses, are also threats.

A changing climate’s impact on the geographical distribution and incidence of vector-borne diseases in other countries where these diseases are already found can also impact North Americans, especially as a result of increasing trade with, and travel to, tropical and subtropical areas. Whether a changing climate in the U.S. will increase the chances of domestically acquiring diseases such as dengue fever is uncertain due to vector-control efforts and lifestyle factors, such as time spent indoors, that reduce human-insect contact.

Infectious disease transmission is sensitive to local, small-scale differences in weather, human modification of the landscape, the diversity of animal hosts, and human behavior that affects vector-human contact, among other factors. Finer-scale, long-term studies are needed to help quantify the relationships among weather variables, vector range, and vector-borne pathogen occurrence; the consequences of shifting distributions of vectors and pathogens; and the impacts on human behavior. Enhanced vector surveillance and human disease tracking are needed to address these concerns.

Watch a short video about disease vectors, and how communities can defend against them.