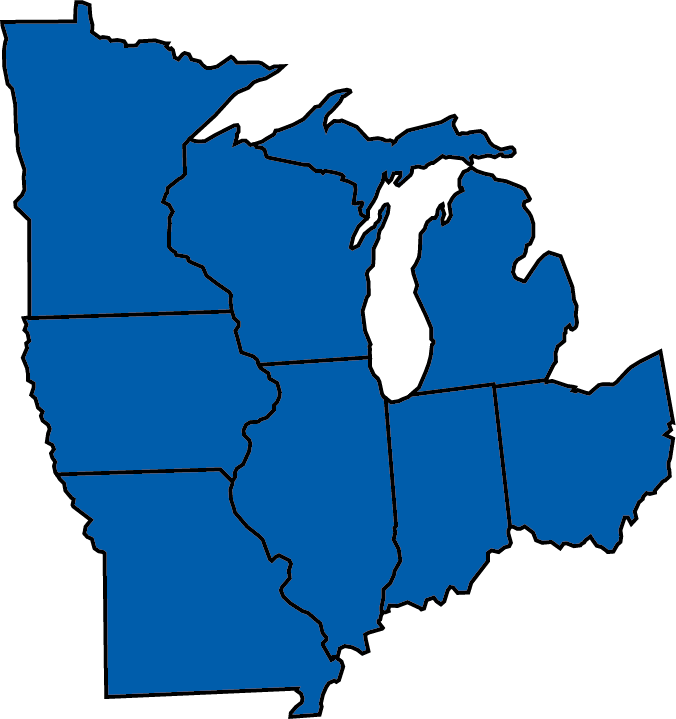 Increased daytime and nighttime temperatures are associated with heat-related diseases (for example, dehydration and heatstroke) and death in the Midwest. High rates of heat-related illness also have been observed in rural populations, where occupational exposure to heat and access to care is a concern. Compared to other regions where worsening heat is also expected to occur, the Midwest is projected to have the largest increase in extreme temperature-related premature deaths under the higher scenario (RCP8.5). Northern midwestern communities and vulnerable populations that historically have not experienced high temperatures may be at risk for heat-related disease and death. Risk of death from extremely cold temperatures will decrease under most climate projection scenarios.

Increases in ground-level ozone and particulate matter are associated with the prevalence of various lung and cardiovascular diseases, which can lead to missed school days, hospitalization, and premature death. In the absence of mitigation, ground-level ozone concentrations are projected to increase across most of the Midwest, resulting in an additional 200 to 550 premature deaths in the region per year by 2050. People, particularly children, with asthma and other respiratory diseases are especially vulnerable to aeroallergens. Aeroallergens can cause allergic rhinitis and exacerbate asthma and sinusitis. Additionally, flooded buildings can experience mold growth that can also trigger asthma attacks and allergies during cleanup efforts.

River flooding in large rivers like the Mississippi, Ohio, and Missouri Rivers and their tributaries can flood surface streets and low-lying areas, resulting in drinking water contamination, evacuations, damage to buildings, injury, and death. Projected increases in the number of extreme precipitation events have been linked to an increased risk of traffic crashes.

Climate-related changes in habitats for disease-carrying insects like the mosquito found in the Midwest (Culex pipiens and Culex tarsalis) that transmits West Nile virus (WNV) and the blacklegged, or deer tick (Ixodes scapularis) that transmits Lyme disease have been associated with higher rates of infection. Overall warmer temperatures are linked to increased numbers of deer ticks in the upper Midwest which has led to earlier seasonal exposure and longer season of risk. Northern expansion of the Culex species in the Midwest is expected to result in upwards of 450 additional WNV cases above the 1995 baseline by 2090 absent greenhouse gas mitigation.

Precipitation events can transport pathogens that cause gastrointestinal illnesses, putting populations who rely on untreated groundwater (such as wells) at an increased risk of disease, particularly following large rainfall events. Contact with and consumption of water contaminated with cyanobacteria (from harmful algal blooms, for example) have been associated with skin and eye irritation, respiratory illness, gastrointestinal illness, and liver and kidney damage. In metropolitan areas with older sewer systems that combine sanitary sewage with storm water, extreme rain can result in the release of raw sewage into rivers and streams, posing both health risks and challenges to major sources of drinking water including the Mississippi River and the Great Lakes.

Mental stress following flooding events can cause substantial health impacts, including sleeplessness, anxiety, depression, and post-traumatic stress disorder. Similarly, drought has been identified as a slow-moving stressor that contributes to acute and chronic mental health impacts such as anxiety and depression.

The health risks of climate change are especially high for people who are less able to cope because characteristics like age, income, or social connectivity make them more vulnerable. For those who are chronically ill or reliant on electronic medical devices, the increased cost of electricity, which contributes to energy insecurity, may introduce financial and health burdens. Tribes in the Midwest have been among the first to feel the effects of climate change as it impacts their culture, sovereignty, health, economies, and ways of life.

In addition to collaborating with the CDC-funded Michigan Climate and Health Adaptation Program (MICHAP), Marquette County also received a mini-grant from CDC and the National Association of County and City Health Officials (NACCHO) in 2019 to support local adaptation efforts. The Marquette County Health Department developed a “Public Health Response to Flooding Disasters” plan to protect their population from increasing extreme rain events. Local decision makers are using the resource to assess climate impacts on their communities’ health and using built environment design concepts to incorporate health adaptations into community planning.

The Minnesota Climate and Health Program protects public health by engaging, informing, and guiding health and climate champions throughout the state to create healthy, equitable, and resilient communities. The program works with partners and stakeholders to educate about the health impacts of a changing climate through trainings and communication materials. For example, the program released a seven-part training and companion materials to educate on climate and health in Minnesota, including agriculture and food security, air quality, extreme heat, water changes, well-being, and vector-borne diseases. To help planners and decision-makers in emergency management understand regional climate trends, the program co-developed climate and health data profiles in 2019. The profiles are tailored to each of the six Homeland Security and Emergency Management (HSEM) regions across the state, acting as a framework for discussing projected local risks related to our changing climate and supporting the development of climate adaptation strategies that protect community health and safety.

Minnesota also received a mini-grant in 2019 from CDC and the National Environmental Health Association (NEHA) to develop an online climate and health vulnerability assessment tool to allow communities across the state to visualize and analyze health, climate, and environmental data to aid planning and adaptation.

The Michigan Climate and Health Adaptation Program (MICHAP) primarily addresses extreme heat, air quality and respiratory illnesses, flooding, vector-borne diseases, water-borne diseases, extreme weather events, and power outages from such events. Some of MICHAP’s adaptation activities include integrating climate health adaptation in community planning and the built environment, building adaptive capacity in urban and rural communities based on their specific vulnerabilities, and working with other local and state level public health partners to collect, assess, and share climate and health information and data. Addressing these hazards serves and benefits all the Michigan residents, and especially the vulnerable populations in each locale where work is being done. An important climate driver of negative health outcomes in Michigan is extreme precipitation. Major health impact pathways identified through the BRACE framework include exposure to waterborne diseases from combined sewer overflows, harmful algal blooms due to increased runoff, impacts on drinking water sources from flooding and drought, and injury or stress from flooding-related damage to homes and infrastructure. MICHAP partners across sectors to address many of these issues.

The BRACE-Illinois Program is preparing for the impacts of a changing climate by focusing on extreme heat, air quality and respiratory illnesses, flooding, vectorborne diseases, water-borne diseases, and mental health. The program’s main activities to address these hazards are education, capacity building in the local health departments, and use of planning tools. Through a competitive selection process, local health departments have the opportunity to receive training and support in the areas of climate science, public health effects linked to climate sensitive events, public health hazard vulnerability assessment, strategic planning to address prioritized climate sensitive health effects, and incorporating climate change into current programs and planning processes. The program also provides educational opportunities by providing continuing medical education credits to a variety of audiences through multiple modalities with an emphasis on the medical community (an identified key stakeholder). BRACE-Illinois also develops toolkits designed to help guide public health and emergency preparedness professionals in their efforts to prepare their communities for the new normal of extreme weather events.

The Wisconsin Climate and Health Program addresses health effects related to extreme heat, extreme cold, flooding, and vector-borne diseases. The program is advised by a health equity advisory team so that implementation and evaluation efforts can be focused on those most at-risk. One of the adaptation activities has been a prospective extreme heat-related community assessment of public health emergency response (CASPER) in Milwaukee, which a previous heat vulnerability index project identified as extremely vulnerable during an extreme heat event. This tool is being evaluated for use during extreme weather events. The data being collected will be used to inform future extreme heat plans in Milwaukee. The program has also worked on a flood vulnerability and a risk map. An interactive ArcGIS online web platform was created to assess vulnerability to and risk for flooding based on a variety of variables including a social vulnerability index, flood plains, and critical health care infrastructure. Additionally, a flood resilience scorecard is being produced through the program. This scorecard is a comprehensive checklist that assesses social, institutional, and environmental variables so that local municipalities can better assess their vulnerabilities to flooding events. It also allows local municipalities to better plan for future flooding events by using the tool’s recommendations based on their individual scores.