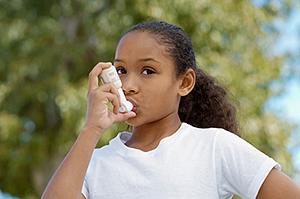 Climate change is projected to harm human health by increasing ground-level ozone and/or particulate matter air pollution in some locations. Ground-level ozone (a key component of smog) is associated with many health problems, such as diminished lung function, increased hospital admissions and emergency room visits for asthma, and increases in premature deaths.

Factors that affect ozone formation include heat, concentrations of precursor chemicals, and methane emissions. Particulate matter concentrations are affected by wildfire emissions and air stagnation episodes, among other factors. By increasing these different factors, climate change is projected to lead to increased concentrations of ozone and particulate matter in some regions. Increases in global temperatures could cause associated increases in premature deaths related to worsened ozone and particle pollution.

Estimates that assume no change in regulatory controls or population characteristics have ranged from 1,000 to 4,300 additional premature deaths nationally per year by 2050 from combined ozone and particle health effects. Less certainty exists about the responses of airborne particles to climate change than the response of ozone. Health-related costs of the current effects of ozone air pollution exceeding national standards have been estimated at $6.5 billion (in 2008 U.S. dollars) nationwide, based on a U.S. assessment of health impacts from ozone levels during 2000–2002.

Watch a short video about air quality changes, and learn what communities can do to prepare.