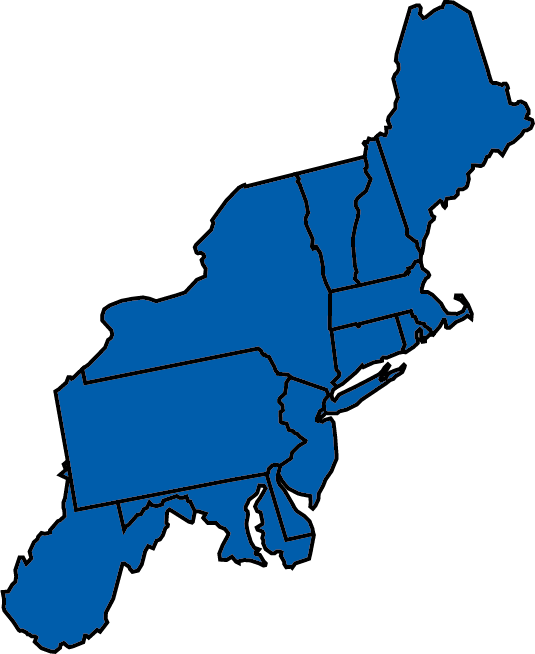 During extreme heat events, nighttime temperatures in the region’s big cities are generally several degrees higher than surrounding regions, leading to higher risk of heat-related death. In urban areas, the hottest days in the Northeast are also often associated with high concentrations of urban air pollutants including ground-level ozone.

Much of the historical development of industry and commerce in New England occurred along rivers, canals, coasts, and other bodies of water, these areas often have a higher density of contaminated sites, waste management facilities, and petroleum storage facilities that are potentially vulnerable to flooding. As a result, increases in flood frequency or severity could increase the spread of contaminants into soils and waterways, resulting in increased risks to human health. When coupled with storm surges, sea level rise can pose severe risks of flooding, with consequent physical and mental health impacts on coastal populations.

Increased soil erosion and agricultural runoff—including manure, fertilizer, and pesticides—are linked to excess nutrient loading of water bodies as well as possible food safety or public health issues from food and waterborne infections. Warmer winters are expected to increase pressure from weeds and pests, demand for pesticides, and therefore the risk of human health effects from increased chemical exposures.

Increased soil erosion and agricultural runoff—including manure, fertilizer, and pesticides—are linked to excess nutrient loading of water bodies as well as possible food safety or public health issues from food and waterborne infections. Warmer winters are expected to increase pressure from weeds and pests, demand for pesticides, and therefore the risk of human health effects from increased chemical exposures. Increasing prevalence of shell disease in lobsters and several pathogens in oysters have been associated with rising water temperatures; other pathogens that infect shellfish pose risks to human health.

Older or sicker individuals and those persons who are without access to air conditioning, living in older homes, socially isolated, or working outdoors are considered particularly vulnerable to the effects of heat. The combination of heat stress and poor urban air quality can pose a major health risk to vulnerable groups: young children, elderly, socially or linguistically isolated, economically disadvantaged, and those with preexisting health conditions, including asthma. Similarly, poor, elderly, historically marginalized, recent immigrants, and linguistically or socially isolated individuals as well as those populations with existing health disparities are more vulnerable to precipitation events and flooding due to a limited ability to prepare for and cope with such events.

Extreme heat, extreme cold, and vector-borne diseases are the primary hazards addressed through Maine’s program. The program has developed school and community-based educational interventions, as well as extreme-weather response plans for state and local agencies. Maine’s program has developed a real-time data dashboard to track cases of tick borne disease, such as Lyme disease, and tick-related emergency department visits, which helps health officials understand the spread of ticks and how a changing climate affects the tick’s lifecycle. The program is also working with the University of Maine Climate Change Institute to develop fine-scale climate models specific to Maine that inform local response planning.

The New York City Climate and Health Program (NYC CHP) focuses on the health impacts of current and future climate-related hazards, primarily, extreme heat, extreme cold, and power outages. The program relies on several approaches to analyze the magnitude of these impacts and which populations and communities are most at risk to these impacts, develop, promote, or evaluate climate resilient policies and interventions, and communicate climate-health risk messages. In addition, the program works to ensure that health is a consideration in larger, multi-sectoral planning or resiliency initiatives by helping to prioritize local communities for climate mitigation and adaptation investments. To achieve program success, the program relies heavily on partnerships with internal sister agency programs.

New York State (NYS) has primarily focused on the health impacts of heat, flooding, and heavy precipitation events. These climate hazards are being addressed through the development and implementation of adaptation activities in coordination with program partners. These adaptations include development of Heat and Health county profile reports, working with the National Weather Service to revise the thresholds for issuing heat advisories, providing air conditioners to vulnerable populations, creating a mapping application to display cooling center locations, tracking heat stress hospitalization and emergency department visits annually, publishing lessons learned from the response to Hurricane Sandy, and helping local governments take action to reduce greenhouse gas emissions and adapt to a changing climate.

The New Hampshire Climate and Health Program works to build community resilience to threats such as extreme heat and injury, flooding and injury, tick habitat, and vector-borne disease, with a focus on the elderly, lower-income communities, and individuals spending time outdoors. The program has funded interventions addressing home emergency preparedness among older adults and tick-safe practices among outdoor counselor and campers. The program has also created a heatsafety flyer for the elderly population, provides updates to the state-level extreme heat response plan, and funds the testing of shellfish in warming waters to reduce the risk of food-borne disease.

The Seneca Nation of Indians (located in what is now called New York) is working to address impacts from flooding and storm water, including prevention of vector-borne disease, by incorporating health into existing collaborative climate work. The mini-grant project focuses on health communication.