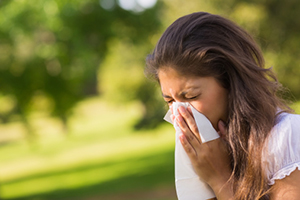 Pollen is an airborne allergen that can affect our health. Pollen grains are tiny “seeds” dispersed from flowering plants, trees, grass, and weeds. The amount and type of pollen in the air depends on the season and geographic region. Though pollen counts are typically higher during the warmer seasons, some plants pollinate year-round.

People with respiratory illnesses like asthma may be more sensitive to pollen. Exposure to pollen has been linked to asthma attacks and increases in hospital admissions for respiratory illness. Medical costs linked with pollen exceed $3 billion every year, with nearly half of those costs being linked to prescription medicine. Higher pollen concentrations and longer pollen seasons can also make you more sensitive to allergens. This can trigger asthma episodes in individuals with asthma and diminish productive work and school days.

Extreme rainfall and rising temperatures also can contribute to indoor air quality problems. For example, they can cause the growth of mold indoors, which may lead to worsened respiratory conditions for people with asthma and/or mold allergies and heightened challenges in maintaining adequate asthma control.