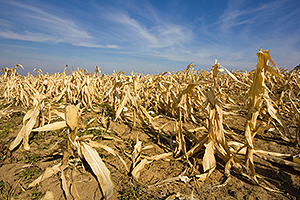 Globally, climate change is expected to threaten food production and certain aspects of food quality, as well as food prices and distribution systems. Many crop yields are predicted to decline because of the combined effects of changes in rainfall, severe weather events, and increasing competition from weeds and pests on crop plants. Livestock and fish production are also projected to decline. Prices are expected to rise in response to declining food production and associated trends such as increasingly expensive petroleum (used for agricultural inputs such as pesticides and fertilizers).

While the U.S. will be less affected than some countries, the nation will not be immune. Health can be affected in several ways. First, Americans with particular dietary patterns, such as Alaska Natives, will confront shortages of key foods. Second, food insecurity increases with rising food prices. In such situations, people cope by turning to nutrient-poor but calorie-rich foods and/or they endure hunger, with consequences ranging from micronutrient malnutrition to obesity. Third, the nutritional value of some foods is projected to decline. Elevated atmospheric CO2 is associated with decreased plant nitrogen concentration, and therefore decreased protein, in many crops, such as barley, sorghum, and soy. The nutrient content of crops is also projected to decline if soil nitrogen levels are suboptimal, with reduced levels of nutrients such as calcium, iron, zinc, vitamins, and sugars. This effect can be alleviated if sufficient nitrogen is supplied. Fourth, farmers are expected to need to use more herbicides and pesticides because of increased growth of pests and weeds, as well as decreased effectiveness and duration of some chemicals. Farmers, farmworkers, and consumers will be increasingly exposed to these substances and their residues, which can be toxic. These impacts of climate change on the nutritional value of food exist within a larger context. Other factors, such as agricultural practices, food distribution systems, and consumer food choices, also play key roles. Adaptation activities can reduce the health-related impacts of some of the anticipated food security challenges.