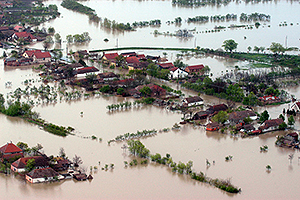 The frequency of heavy precipitation events has already increased for the nation as a whole, and is projected to increase in all U.S. regions. Increases in both extreme precipitation and total precipitation have contributed to increases in severe flooding events in certain regions. Floods are the second deadliest of all weather-related hazards in the United States, accounting for approximately 98 deaths per year, most due to drowning. Flash floods and flooding associated with tropical storms result in the highest number of deaths.

In addition to the immediate health hazards associated with extreme precipitation events when flooding occurs, other hazards can often appear once a storm has passed. Elevated waterborne disease outbreaks have been reported in the weeks following heavy rainfall, although other variables may affect these associations. Water intrusion into buildings can result in mold contamination that manifests later, leading to indoor air quality problems. Buildings damaged during hurricanes are especially susceptible to water intrusion. Populations living in damp indoor environments experience increased prevalence of asthma and other upper respiratory tract symptoms, such as coughing and wheezing, as well as lower respiratory tract infections such as pneumonia, respiratory syncytial virus (RSV), and RSV pneumonia.

At the opposite end of precipitation extremes, drought also poses risks to public health and safety. Drought conditions may increase the environmental exposure to a broad set of health hazards including wildfires, dust storms, extreme heat events, flash flooding, degraded water quality, and reduced water quantity. Dust storms associated with drought conditions contribute to degraded air quality due to particulates and have been associated with increased incidence of coccidioidomycosis (valley fever), a fungal pathogen, in Arizona and California.

Watch a short video about how climate change can increase storms and flooding, and what communities can do to prepare.